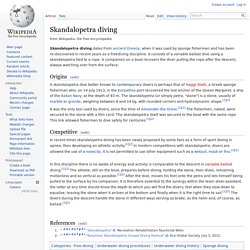 It consists of a variable ballast dive using a skandalopetra tied to a rope. A companion on a boat recovers the diver pulling the rope after the descent, always watching over from the surface. Origins[edit] A skandalopetra dive better known to contemporary divers is perhaps that of Haggi Statti, a Greek sponge fisherman who, on 14 July 1913, in the Karpathos port recovered the lost anchor of the Queen Margaret, a ship of the Italian Navy, at the depth of 83 m. The skandalopetra (or simply petra, "stone") is a stone, usually of marble or granite, weighing between 8 and 14 kg, with rounded corners and hydrodynamic shape.[1][2] It was the only tool used by divers, since the time of Alexander the Great.[1][2] The fishermen, naked, were secured to the stone with a thin cord. Dave Mullins. Hannah Stacey. Hannah Stacey from St Eval in Cornwall, is the current UK women's free-diving record holder. 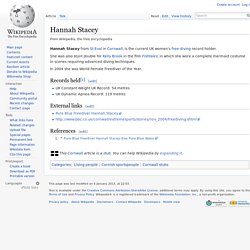 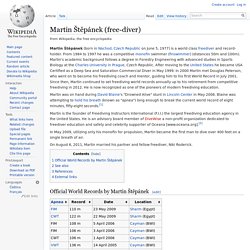 From 1984 to 1997 he was a competitive monofin swimmer (finswimmer) (distances 50m and 100m). Martin's academic background follows a degree in Forestry Engineering with advanced studies in Sports Biology at the Charles University in Prague, Czech Republic. After moving to the United States he became USA Certified as a Deep Sea and Saturation Commercial Diver in May 1999. In 2000 Martin met Douglas Peterson, who went on to become his freediving coach and mentor, guiding him to his first World Record in July 2001. Static apnea. Static apnea is a discipline in which a person holds their breath (apnea) underwater for as long as possible, and need not swim any distance.[1] Static apnea is defined by the International Association for Development of Apnea (AIDA International) and is distinguished from the Guinness World Record for breath holding underwater, which allows the use of oxygen in preparation. 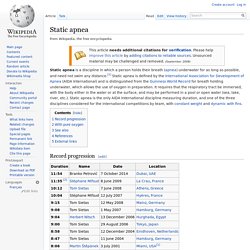 It requires that the respiratory tract be immersed, with the body either in the water or at the surface, and may be performed in a pool or open water (sea, lake, river, etc.). Static apnea is the only AIDA International discipline measuring duration, and one of the three disciplines considered for the international competitions by team, with constant weight and dynamic with fins. Record progression[edit] With pure oxygen[edit] There is a variation of the static apnea discipline where its possible to pre-breathe 100% oxygen for up to 30 minutes prior to the breathhold. 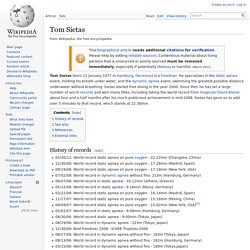 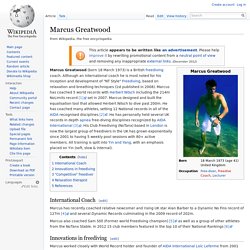 Although an international coach he is most noted for his inception and development of "NT Style" Freediving, based on relaxation and breathing techniques (1st published in 2008). Marcus has coached 5 world records with Herbert Nitsch including the 214m NoLimits record [1] set in 2007. Marcus designed and built the equalisation tool that allowed Herbert Nitsch to dive past 200m. 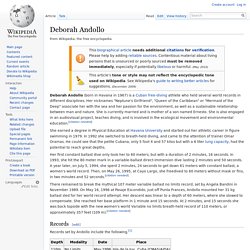 Her nicknames "Neptune's Girlfriend", "Queen of the Caribbean" or "Mermaid of the Deep" associate her with the sea and her passion for the environment, as well as a sustainable relationship between man and nature. She is currently married and is mother of a son named Ernesto. She is also engaged in an audiovisual project, teaches diving, and is involved in the ecological movement and environmental education. Stig Severinsen. Stig Åvall Severinsen (born 1973, Aalborg, Denmark) is a four-time world champion freediver and holder of multiple Guinness World Records. 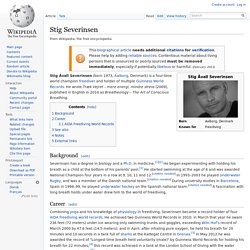 He wrote Træk Vejret – mere energi, mindre stress (2009), published in English in 2010 as Breatheology – The Art of Conscious Breathing. Umberto Pelizzari. Umberto Pelizzari (born August 28, 1965) is an Italian freediver, widely considered among the best of all times. 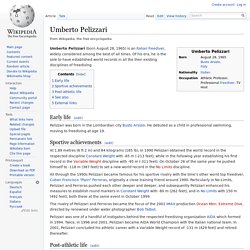 Pierre Frolla. Pierre Frolla (born February 14, 1975) is a Monegasque free-diver.[1] Pierre Frolla is a triple World’s Recordman in Free Immersion (including -80 meters on 17 August 2001 in Monaco). 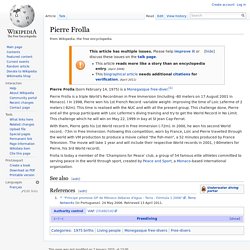 I In 1998, Pierre won his 1st French Record -variable weight- improving the time of Loic Leferme of 2 meters (-82m). This time is realised with the NUC and with all the present group. This challenge done, Pierre and all the group participate with Loic Leferme’s diving training and try to get the World Record in No Limit. This challenge which he will win on May 22, 1999 in bay at St Jean Cap-Ferrat. Monofin. A freediver using a monofin Herbert Nitsch wearing a monofin at the Cyprus BIOS 2004 Freediving Open Classic. Snorkeling. Scuba diver snorkeling at surface to dive location Snorkeling (British and Commonwealth English spelling: snorkelling) is the practice of swimming on or through a body of water while equipped with a diving mask, a shaped tube called a snorkel, and usually fins. In cooler waters, a wetsuit may also be worn. Use of this equipment allows the snorkeler to observe underwater attractions for extended periods of time with relatively little effort.

Snorkeling is a popular recreational activity, particularly at tropical resort and scuba diving locations. The primary appeal is the opportunity to observe underwater life in a natural setting without the complicated equipment and training required for scuba diving. Snorkeling is also used by scuba divers when on the surface, in underwater sports such as underwater hockey and underwater rugby, and as part of water-based searches conducted by search and rescue teams. Mehgan Heaney-Grier. Freedive Champion Mehgan Heaney-Grier Mehgan Heaney-Grier (born Mehgan Renee Heaney, August 26, 1977) is a US champion freediver, fashion model, actress, conservationist, and TV personality.[1][2][3] Early life[edit] Heaney-Grier was born in Duluth, Minnesota to Bill and Renee Heaney.

Her parents divorced when she was six years old.[4] When she was eleven years old her mother remarried to Nelson Grier and in the summer of 1989, Heaney-Grier, along with her sister Erin, mother and new stepfather moved to the Florida Keys. Stéphane Mifsud. Stéphane Mifsud is a French free diver born 13 August 1971 in Istres (Bouches-du-Rhône). His lung capacity was measured at 10.5 litres. Emma Farrell (freediver) Emma Farrell (born 1973) is a British freediving instructor, and the author of the book One breath: a reflection on freediving.[1] She was head of instruction at the UK’s DeeperBlue freediving club from 2004 until her resignation in 2009;[2] she now runs her own freediving training company, GoFreediving, which teaches the SSI freediving programme.

William Trubridge. Tanya Streeter. Dynamic apnea. Dynamic apnea covers two of the eight competitive freediving categories recognised by the AIDA International (International Association for Development of Apnea): dynamic without fins and dynamic with fins.[1] Both disciplines require breath held dives where the diver travels in a horizontal position under water under their own power without aid/physical contact of a static surface, with the exception of the pool wall when done indoors. The records can only be recognized in pools of 25m or greater.

Guillaume Néry. AIDA International. No-limits apnea. No-limits apnea is an AIDA International freediving discipline in which the freediver descends and ascends with the method of his or her choice.[1] Often, a heavy metal bar or "sled" grasped by the diver descends fixed to a line, reaching great depths. The most common ascension assistance is via inflatable lifting bags or vests with inflatable compartments, which surface rapidly. The dives may be performed head-first or feet-first. This form of diving is considered extremely dangerous by diving professionals; the various organizations that organize and promote breath-hold activities have not officially recognized no limits apnea, given that they’re not willing to deal with the consequent dangers. No-limits apnea has claimed the lives of several divers. Robert Croft (diver) Robert Croft is a free-diver who, in 1967, became the first person to free-dive beyond the depth of 200 feet.