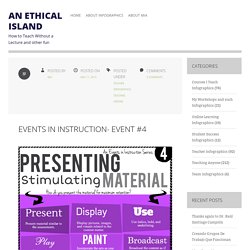 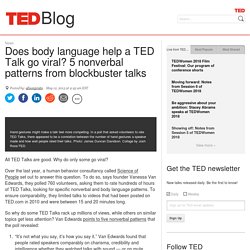 In a poll that asked volunteers to rate TED Talks, there appeared to be a correlation between the number of hand gestures a speaker made and how well people rated their talks. Photo: James Duncan Davidson. Collage by Josh Roos/TED. All TED Talks are good. Why do only some go viral? Over the last year, a human behavior consultancy called Science of People set out to answer this question. So why do some TED Talks rack up millions of views, while others on similar topics get less attention? “It’s not what you say, it’s how you say it.” We spoke to Van Edwards to find out more. What initially piqued your interest in looking TED Talks? We’re always looking for something that is counter to logic. I had to figure out how we could turn this into an experiment. At TEDxVilnius, photographer Jurga Anusauskiene captured speakers’ nonverbal communication in photos.

And what is thin-slicing? Let’s talk through some of the patterns you noticed. Julian Treasure: How to speak so that people want to listen. A TED speaker coach shares 11 tips for right before you go on stage. Gina Barnett advises a speaker before the annual TED Conference. 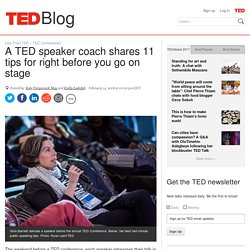 Below, her best last-minute public speaking tips. Photo: Ryan Lash/TED The weekend before a TED conference, each speaker rehearses their talk in the TED theater. It’s a chance for the speakers to get to know the space, for our curators to give last-minute suggestions on talk content, and for our speaker coaches to give advice to help each speaker feel their absolute best the day of their talk.

During this time, we overheard speaker coaches Gina Barnett, Michael Weitz and Abigail Tenenbaum give some helpful tips that we’d never heard before. We asked Gina Barnett, longtime TED speaker coach and author of the book Play the Part: Master Body Signals to Connect and Communicate for Business Success to share some specifics. Start drinking water 15 minutes before you start talking.

Stay tuned to the TED Blog for full coverage of all the talks at TED2016, and also follow the conference live at @TEDTalks. 7 Hand Gestures That Make You Look Like a Real Intellectual. You’ve definitely seen it at some point. 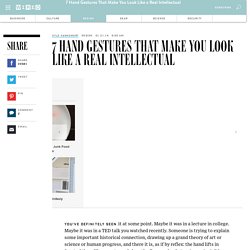 Maybe it was in a lecture in college. Maybe it was in a TED talk you watched recently. Someone is trying to explain some important historical connection, drawing up a grand theory of art or science or human progress, and there it is, as if by reflex: the hand lifts in front of them like an upturned claw, the fingers slowly turning an invisible dial. That’s “The Dialectic,” one of the hand gestures you’ll need to master to become a genuine thought leader. Alice May Williams and Jasmine Johnson observed “the full complement” of these gestures in the process of earning their MFA at Goldsmiths College in London. Throughout their courses, Williams and Johnson saw the gestures repeated so frequently that “it became hard not to notice them spreading from academics to students and back again,” they explain–a sort of vicious cycle of performative thinking. Click to Open Overlay Gallery Their virtual manual includes nine gestures in all. Go Back to Top. Ultimate Ice Breaker? Making & Flying Paper Planes!

Zaid Alsagoff , Principal Lead (e-Learning & Innovation) at International Medical University (IMU) Posted 08/31/2015 1:18AM | Last Commented 09/16/2015 5:48PM While watching the movie 'Paper Planes' (in Norway), I was struck by the idea of using Paper Planes as an Ice breaker and/or team building activity. 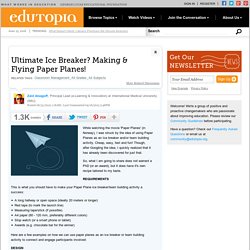 Cheap, easy, fast and fun! Though, after Googling the idea, I quickly realized that it has already been discovered for just that. So, what I am going to share does not warrant a PhD (or an award), but it does have it's own recipe tailored to my taste.