Revealed: Merseyside's zero star restaurants and takeaways. More than 25 Merseyside restaurants, pubs, bars and other food outlets received zero stars for food hygiene in their latest round of assessments. 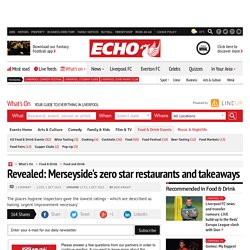 The list includes popular parts of Liverpool City Centre and will shock their regular diners to learn that they scored zero out of five - the lowest possible score. A surprise addition is Yiamas in Birkenhead, which earlier this year was rated by customers as Merseyside's most popular restaurant on Tripadvisor. Revealed: The top 10 ranked Merseyside restaurants and cafes, according to customers Some restaurants are still included from last time we looked at the scores, as restaurants may not have been re-inspected during that time. Others have gone on to drastically improve their scores, such as popular Hardman Street eaterie Grilla, which now has five stars. See the zero rated venues near you with this interactive map by Alexandra Genova. *All ratings were correct at time of publication. Costa Coffee Unit L41 44 Lord Street L3 8NY Graham Chambers. The Smugglers Cove - Albert Dock. The Smugglers Cove offers world-famous rums, and in fact we’re the biggest rum venue in Liverpool with over 100 different rums in-store! 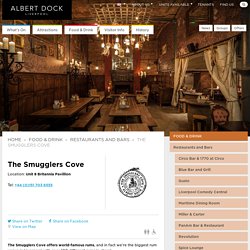 In fact Smugglers Cove is now the proud owner of a Guinness World Record, thanks to its 150 strong collection of Rums in the Cabinet behind its bar. Stop by and have a look, even better, as one of our experience bar staff to recommend something that you’re sure to enjoy. We’ve also got a large collection of beers, ciders, cask-conditioned ales, a selection of the finest Champagnes and an intriguing rum-based cocktail menu. Why not make your night even more special and book the Smugglers Cove Private Dining Room, where you can enjoy a meal or one of Smugglers famous rum tastings. Food at The Smugglers Cove comes in the form of a rustic deli-style menu with rotisserie, barbeque and home comforts. Owned and operated by the New World Trading Company, The Smugglers Cove is a concept unlike anything else! 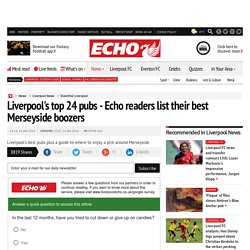 So when we asked Liverpool Echo readers to select their favourites we were inundated with responses. In no particular order, here's the most popular - but let us know which ones we missed in the comments section below. * The Dispensary - Renshaw Street The warm and welcoming Dispensary – or, as Dave sometimes calls it, the Dizzy – was named Camra’s Liverpool Pub of the Year in 2010 and 2011, and the Good Beer Guide singles out “the landlord’s impeccable attention to beer quality”.

Its seven hand pumps offer an ever-changing range of brews light and dark from breweries large and small. * The Belvedere - Sugnall Street, Liverpool Situated at the end of a cul-de-sac off Falkner Street, the Grade-II-listed building set in Liverpool's Georgian Quarter, the Belvedere blends traditional ales with it's very own 'Ginnasium' section of around 40 different gins, including its own Liverpool Gin. * Ye Cracke - Rice Street, Liverpool. 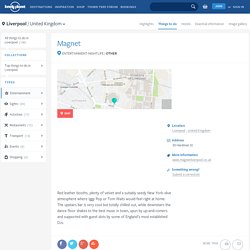 The upstairs bar is very cool but totally chilled out, while downstairs the dance floor shakes to the best music in town, spun by up-and-comers and supported with guest slots by some of England's most established DJs. Six of the best pub quizzes in Liverpool. A great pub quiz is the measure of any decent boozer. 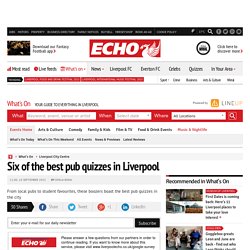 Whether you’re in it to bag a big cash prize, to show off your general knowledge, or to find an excuse for a midweek pint, everyone loves a quiz down the local. If you’re a fan of pub trivia and you want to find the best place to showcase your talents then look no further. We’ve made a list of the best pub quizzes in Liverpool for you to choose from. Jolly Miller Time and date: 9:30pm on Monday Cost to enter: Free Prizes: 'Open the box' jackpot for the winning team Nice and simple, this is a classic general knowledge pub quiz at the Jolly Miller in Croxteth. Ma Egerton's Stage Door Time and date: 8pm on Monday Cost to enter: £1 per person Prizes: £50 cash prize, £25 bar tab, bottle of prosecco. This is a pub quiz with a showbiz twist. Revolution Albert Dock Time and date: 7:30pm on Tuesday Cost to enter: TBC Prizes: Money behind the bar, bonus goodies like theatre tickets. If you love pub quizzes but hate cheats then this is the one for you.