Raspberry Pi MongoDB Installation – The working guide! - Hardware_Hacks. In this tutorial I will go through how to install MongoDb on your Raspberry Pi and also give a few tips on typical issues and fixes. 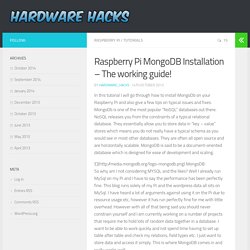 MongoDb is one of the most popular “NoSQL” databases out there. NoSQL releases you from the constraints of a typical relational database. They essentially allow you to store data in “key – value” stores which means you do not really have a typical schema as you would see in most other databases. They are often all open source and are horizontally scalable. MongoDB is said to be a document-oriented database which is designed for ease of development and scaling. ! So why am I not considering MYSQL and the likes? Before kicking off with the installation instructions I will add a few links for further reading below so you can get a bit more information about MongoDb, its usages, its good and bad points and also why you should consider NoSQL.

Further Reading: – What is noSql? Lets get on with the installation. Sudo apt-get update sudo apt-get upgrade sudo scons. Python - Tweepy. Make stream run forever. How to remove one old python installation from a system with multiple (non-system) installations of python. Collecting Twitter Data: Storing Tweets in MongoDB. Part I: Introduction | Part II: Getting Started | Part III: Using a Python Stream Listener | Part IV: Storing Tweets in MongoDB [current page] In the first three sections of the Twitter data collection tutorial, I demonstrated how to collect tweets using both R and Python and how to store these tweets first as JSON files then having R parse them into a .csv file. 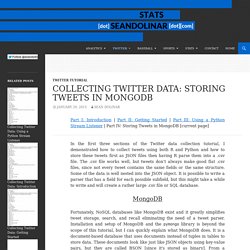 The .csv file works well, but tweets don’t always make good flat .csv files, since not every tweet contains the same fields or the same structure. Some of the data is well nested into the JSON object. It is possible to write a parser that has a field for each possible subfield, but this might take a while to write and will create a rather large .csv file or SQL database. MongoDB Fortunately, NoSQL databases like MongoDB exist and it greatly simplifies tweet storage, search, and recall eliminating the need of a tweet parser. [I'm writing this from the perspective from ad hoc small-scale research. MongoDB For Beginners: Introduction and Installation.

Mongo is an open source schemaless database system which is very different from the more popular MySQL. 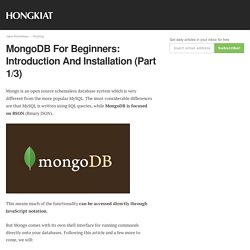 The most considerable differences are that MySQL is written using SQL queries, while MongoDB is focused on BSON (Binary JSON). This means much of the functionality can be accessed directly through JavaScript notation. But Mongo comes with its own shell interface for running commands directly onto your databases. Following this article and a few more to come, we will: Explore the steps towards getting your system (Windows and Mac) up and running with Mongo,How Mongo shell command works (coming soon)Setup MongoDB with PHP (coming soon) Web developers will mostly enjoy Mongo if they are familiar with JSON. It is a bit different than regular SQL tables containing rows/columns of data. Why Choose MongoDB? There are a few other schemaless databases you could choose to try other than Mongo. Key Terminology A collection may be considered a table except there are no aligned columns. 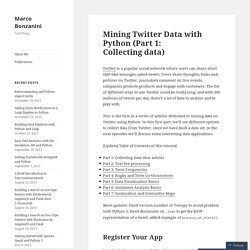 Users share thoughts, links and pictures on Twitter, journalists comment on live events, companies promote products and engage with customers. The list of different ways to use Twitter could be really long, and with 500 millions of tweets per day, there’s a lot of data to analyse and to play with. This is the first in a series of articles dedicated to mining data on Twitter using Python. In this first part, we’ll see different options to collect data from Twitter. Once we have built a data set, in the next episodes we’ll discuss some interesting data applications.

[Update] Table of Contents of this tutorial: More updates: fixed version number of Tweepy to avoid problem with Python 3; fixed discussion on _json to get the JSON representation of a tweet; added example of process_or_store(). Register Your App The first step is the registration of your app. Collecting Twitter Data: Storing Tweets in MongoDB. Mining Twitter Data with Python (Part 1: Collecting data) 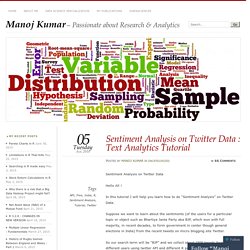 In this tutorial I will help you learn how to do “Sentiment Analysis” on Twitter Data. Suppose we want to learn about the sentiments (of the users for a particular topic or object such as Bhartiya Janta Party aka BJP, which won with full majority, in recent decades, to form government in center though general elections in India) from the recent tweets on micro blogging site Twitter. So our search term will be “BJP” and we collect about 1500 tweets from different users using twitter API and different R packages. As a first step, let us install some important packages for this tutorial purpose. 1. twitteR 2. sentiment 3. plyr 4. ggplot2 5. wordcloud 6. Then download “sentiment” package from here < > and install it. How could I get Twitter data for research? - REST API v1.1 - Twitter Developers.