Cold War - Wikipedia. 1947–1991 period of geopolitical tension between the Eastern and Western Bloc Borders of NATO (blue) and Warsaw Pact (red) states during the Cold War-era in the Northern Hemisphere. 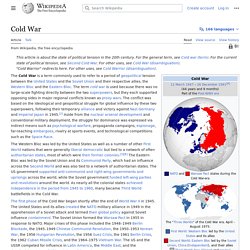 With her brother on her back, a Korean girl trudges by a stalled American M46 Patton tank, at Haengju, South Korea, 1951 The Cold War and its events have left a significant legacy. It is often referred to in popular culture, especially with themes of espionage and the threat of nuclear warfare. Cold War in 9 Minutes.