The First Drones, Used in World War I. I think they gave up on the Kettering Bug way too early. 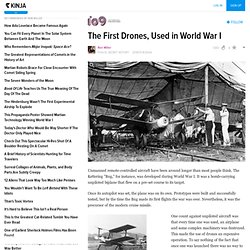 In WWII the USN returned to the idea of "assault drones" for use against warships. As these were conceptually identical to the Japanese Kamikaze, minus the pilot, they were full aircraft and required a whole carrier deck to launch. Self-assembling swarmbots are amazing, and look creepily alive. Robot learns to recognise itself in the mirror - tech - 22 August 2012. ¿Puede un robot aprender a caminar por sí solo? One Per Cent: Genetic algorithms let Chinese drones hunt submarines. Paul Marks, senior technology correspondent MQ-8B Fire Scout Helicopter, a US ship-based UAV (Image: Martin Lee/Rex Features) Chinese navy researchers have revealed how they plan to hunt submarines using ship-launched uncrewed air vehicles (UAVs). 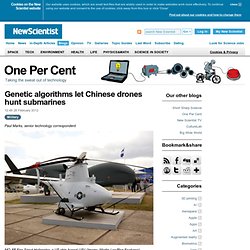 The plan, developed by the naval academy in Dalian, China, is to choose the best hunting pattern for a drone using the power of the genetic algorithm - a search engine that evolves an optimum solution by discarding feeble offspring and breeding the best to make ever stronger ones. The route evolved would make the best use of fuel, cater for air and sea threats and work with dropped sonar buoys. New Robot Crawls Like an Earthworm. Dubbed the "Meshworm," a new bio-inspired robot stretches and contracts to crawl across the ground like an earthworm. 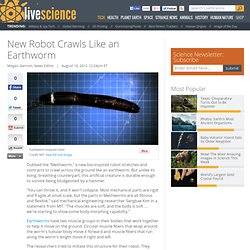 But unlike its living, breathing counterpart, this artificial creature is durable enough to survive being bludgeoned by a hammer. "You can throw it, and it won't collapse. Most mechanical parts are rigid and fragile at small scale, but the parts in Meshworms are all fibrous and flexible," said mechanical engineering researcher Sangbae Kim in a statement from MIT. "The muscles are soft, and the body is soft … we're starting to show some body-morphing capability. " Earthworms have two muscle groups in their bodies that work together to help it move on the ground. The researchers tried to imitate this structure for their robot. A small battery and circuit board was added to the tube to produce a current to heat the wires at certain segments along the body. Though small, the Meshworm is durable. Rock, paper, scissors robot can't be beaten.

In case you were in any doubt about the superiority of robots to humans, Japanese researchers have unleashed a machine that's unbeatable at that timeless human test of wills, rock, paper, scissors. 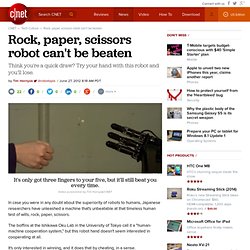 The boffins at the Ishikawa Oku Lab in the University of Tokyo call it a "human-machine cooperation system," but this robot hand doesn't seem interested in cooperating at all. 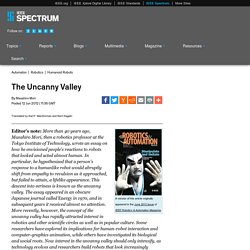 MacDorman and Norri Kageki Editor's note: More than 40 years ago, Masahiro Mori, then a robotics professor at the Tokyo Institute of Technology, wrote an essay on how he envisioned people's reactions to robots that looked and acted almost human. Uncanny valley. In an experiment involving the human lookalike robot Repliee Q2 (pictured above), the uncovered robotic structure underneath Repliee, and the actual human who was the model for Repliee, the human lookalike triggered the highest level of mirror neuron activity.[1] Etymology[edit] The term was coined by the robotics professor Masahiro Mori as Bukimi no Tani Genshō (不気味の谷現象) in 1970.[5] The hypothesis has been linked to Ernst Jentsch's concept of the "uncanny" identified in a 1906 essay "On the Psychology of the Uncanny".[6][7][8] Jentsch's conception was elaborated by Sigmund Freud in a 1919 essay entitled "The Uncanny" ("Das Unheimliche").[9] Hypothesis[edit] Mori's original hypothesis states that as the appearance of a robot is made more human, some observers' emotional response to the robot will become increasingly positive and empathic, until a point is reached beyond which the response quickly becomes that of strong revulsion. 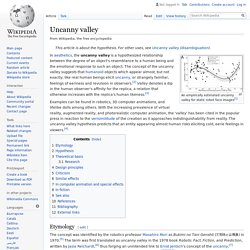 Facial Scare? Robots Get Human Faces: Scientific American Gallery. Most people now have computers and phones that can talk to them. From straightforward, voice-activated commands to the strangely poetic responses of the iPhone 4S's Siri, computers and humans are getting closer. Robot builds its own body from sprayable foam - tech - 19 October 2011. Video: Watch foambot in action as it sprays on its own body LIKE a sculpture that springs to life, a new type of robot makes its own body parts using spray-on foam. 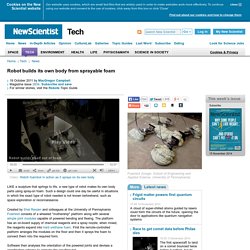 Such a design could one day be useful in situations in which the exact type of robot needed is not known beforehand, such as space exploration or reconnaissance. Created by Shai Revzen and colleagues at the University of Pennsylvania Foambot consists of a wheeled "mothership" platform along with several simple joint modules capable of powered bending and flexing. The platform has an on-board supply of chemical reagents and a spray nozzle; when mixed, the reagents expand into hard urethane foam.

First the remote-controlled platform arranges the modules on the floor and then it sprays the foam to connect them into the required form. Software then analyses the orientation of the powered joints and devises a coordination scheme to animate the resulting bot. Disembodied Japanese robot arms applaud your growing fear. Screen-spy program can read texts and emails - tech - 02 November 2011. Video: Software spies on smartphone users NEXT time you're tapping off a private text message or sensitive email in a public place, consider this: someone could be reading every letter you type from up to 60 metres away. 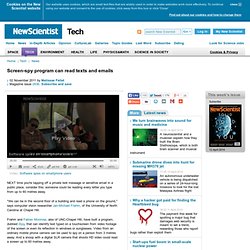 "We can be in the second floor of a building and read a phone on the ground," says computer vision researcher Jan-Michael Frahm, of the University of North Carolina at Chapel Hill. Frahm and Fabian Monrose, also of UNC-Chapel Hill, have built a program, dubbed iSpy, that can identify text typed on a touchscreen from video footage of the screen or even its reflection in windows or sunglasses. Od dzisiaj latanie staje się przyjemnością. 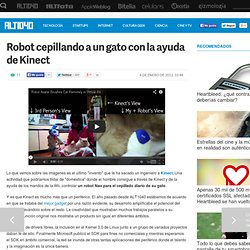 Nao Next Gen, el robot que a muchos nos gustaría tener. Tests that show machines closing in on human abilities - tech - 22 January 2009. Read full article Continue reading page |1|2 Video: As new ways to test how well machines can match aspects of human intelligence are dreamt up, they are getting closer to beating them. 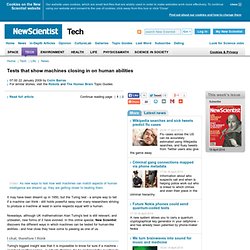 It may have been dreamt up in 1950, but the Turing test - a simple way to tell if a machine can think - still holds powerful sway over many researchers striving to produce a machine at least in some respects equal with a human. Nowadays, although UK mathematician Alan Turing's test is still relevant, and unbeaten, new forms of it have evolved. Robot Uses Lizard Tail to Leap [Video] Science fiction often envisions worlds populated by humanoid robots. In reality, insects, reptiles and non-human animals often serve as a more practical template for automatons. The more legs a robot has, the more easily it can navigate tough terrain. Lasers power Pentagon’s next-gen artificial limbs. SExpand You mean something like this? Human Trials Next for Darpa’s Mind-Controlled Artificial Arm. Pentagon-backed scientists are getting ready to test thought-controlled prosthetic arms on human subjects, by rewiring their brains to fully integrate the artificial limbs.

Already in recent years, we’ve seen very lifelike artificial arms, monkeys nibbling bananas with mind-controlled robotic limbs and even humans whose muscle fibers have been wired to prosthetic devices. But this is the first time human brains will be opened up, implanted with a neural interface and then used to operate an artificial limb. It’s a giant step that’ll transform the devices, which were little more than hooks and cables only 50 years ago. El asombroso vuelo de un Drone casero para vigilar a policía y manifestantes. Varsovia, 12 de noviembre del pasado sábado. Lo que vemos en el vídeo no es un RPG aunque lo parezca. A real-life swarm of flying robots, right out of a 1980s arcade game.

This robotic baby crawled out of your nightmares. Here come the DNA robots. Watch robots kill each other &mdash; up close and personal! This wall-climbing robot is half tank, half gecko. Boxing Robots of the 1930s. Acrobatic Velociraptors May Inspire New Generation of Agile Droids. Meat-eating dinosaurs like Velociraptor may have been quite the acrobats, using their tails to land aerial maneuvers safely, say scientists studying today's leaping lizards. Long-tailed robots built as part of this work could help inspire a new generation of maneuverable search-and-rescue droids, the researchers add. More than 40 years ago, scientists proposed that Velociraptor and other predatory dinosaurs used their tails to stabilize their bodies during jumps or similar rapid or irregular movements, helping make them active, agile hunters.

The idea is that the raptors used their tails much as tightrope walkers use balancing poles — tightrope walkers tilt the poles to make their bodies lean in the opposite direction of the tilt, and the thought was that the extinct reptiles bent their tails to control the orientation of their bodies as they leapt. Robotic Mule Follows Soldiers Like a Huge Dog. Spherical Flying Machine Developed by Japan Ministry Of Defense #DigInfo.

Norbert Wiener. Norbert Wiener (November 26, 1894 – March 18, 1964) was an American mathematician and philosopher. Boids. As with most artificial life simulations, Boids is an example of emergent behavior; that is, the complexity of Boids arises from the interaction of individual agents (the boids, in this case) adhering to a set of simple rules. The rules applied in the simplest Boids world are as follows: separation: steer to avoid crowding local flockmatesalignment: steer towards the average heading of local flockmatescohesion: steer to move toward the average position (center of mass) of local flockmates More complex rules can be added, such as obstacle avoidance and goal seeking. The basic model has been extended in several different ways since Reynolds proposed it. Boids (Flocks, Herds, and Schools: a Distributed Behavioral Model)