Daily Bouncer, Latest Headlines, Todays News Headlines, Current Breaking News, Latest News Today. The luncheon highlighted the progress the world has made in the 20 years since the historic UN conference on women in Beijing and the need to step up efforts to make gender equality a reality. 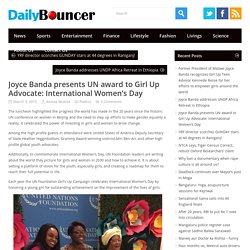 It celebrated the power of investing in girls and women to drive change. Among the high profile guests in attendance were United States of America Deputy Secretary of State Heather Higginbottom, Grammy Award-winning violinist,Miri Ben-Ari, and other high profile global youth advocates. Additionally, to commemorate International Women’s Day, UN Foundation leaders are writing about the world they picture for girls and women in 2030 and how to achieve it. It is about setting a platform of vision for the youth, especially girls, and creating a roadmap for them to reach their full potential in life. Each year the UN Foundation Girl’s Up Campaign celebrates International Women’s Day by honoring a young girl for outstanding achievement on the improvement of the lives of girls. 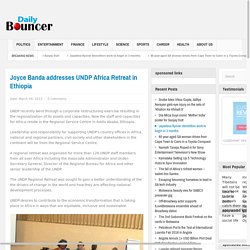 Now the staff and capacities for Africa reside in the Regional Service Centre in Addis Ababa, Ethiopia. Leadership and responsibility for supporting UNDP’s country offices in Africa, national and regional partners, civil society and other stakeholders in the continent will be from the Regional Service Centre. A regional retreat was organized for more than 120 UNDP staff members from all over Africa including the Associate Administrator and Under-Secretary General, Director of the Regional Bureau for Africa and other senior leadership of the UNDP. The UNDP Regional Retreat was sought to gain a better understanding of the the drivers of change in the world and how they are affecting national development processes. UNDP desires to contribute to the economic transformation that is taking place in Africa in ways that are equitable, inclusive and sustainable. Former President of Malawi Joyce Banda recognizes Girl Up Teen Advisor Kennede Resse for her efforts to empower girls around the world. 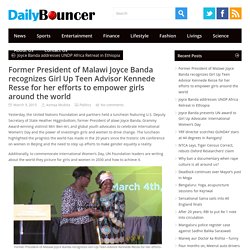 Deputy Secretary of State Heather Higginbottom, former President of alawi Joyce Banda, Grammy Award-winning violinist Miri Ben-Ari, and global youth advocates to celebrate International Women’s Day and the power of investingin girls and women to drive change. The luncheon highlighted the progress the world has made in the 20 years since the historic UN conference on women in Beijing and the need to step up efforts to make gender equality a reality. Additionally, to commemorate International Women’s Day, UN Foundation leaders are writing about the world they picture for girls and women in 2030 and how to achieve it.

Joyce banda on Tumblr. Joyce Banda. Joyce Banda of Malawi: 12 Things You Didn't Know About Her. She’s one of the two African female presidents. 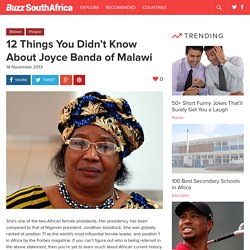 Her presidency has been compared to that of Nigerian president, Jonathan Goodluck. She was globally ranked at position 71 as the world’s most influential female leader, and position 1 in Africa by the Forbes magazine. If you can’t figure out who is being referred in the above statement, then you’re yet to learn much about African current history. Joyce Banda. Her Excellency, Dr Joyce Banda, President of the Republic of Malawi: "I went to a training course in Turin in 1995 .... — en. Joyce Banda’s Foundation Partners Stoller To Promote Rural Farming Within Africa. VENTURES AFRICA – Stoller, an international Agricultural organisation has partnered with Joyce Banda International Foundation (JBIF) to launch a five year initiative that will help African women and children gain access to agricultural education and sustainable commercial practices. 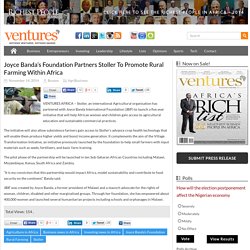 The initiative will also allow subsistence farmers gain access to Stoller’s advance crop health technology that will enable them produce higher yields and boost income generation. It complements the aim of the Village Transformation Initiative, an initiative previously launched by the foundation to help small farmers with input materials such as seeds, fertilizers, and basic farm training.

The pilot phase of the partnership will be launched in ten Sub-Saharan African Countries including Malawi, Mozambique, Kenya, South Africa and Zambia. “It is my conviction that this partnership would impact Africa, model sustainability and contribute to food security on the continent,” Banda said. Dr Joyce Banda.

By Chisomo Gama 13/4/15 Heads of States from all over the world joined Malawians in sending well wishing birthday messages to Malawi’s Former President Dr Joyce Banda who celebrated her special... 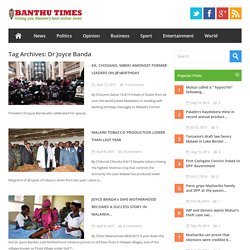 By Chikondi Chinoka 9/4/15 Despite tobacco being the highest revenue crop that controls the economy this year Malawi has produced lower kilograms of all types of tobacco down from last year. Latest p... By Chiko Mwanachala 08/4/2015 A year down the line Dr. Breaking news on Joyce Banda. Joyce Banda. Malawi’s New Leader: Joyce Banda Becomes Second Woman President in Africa. AFP/Getty Images/Newscom The continent of Africa now has a second woman holding the top leadership role in her country. 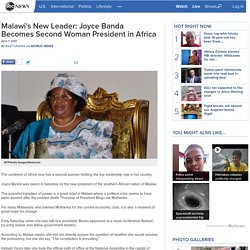 Joyce Banda was sworn in Saturday as the new president of the southern African nation of Malawi. The peaceful transition of power is a great relief in Malawi where a political crisis seems to have been averted after the sudden death Thursday of President Bingu wa Mutharika. For many Malawians who blamed Mutharika for the current economic crisis, it is also a moment of great hope for change. Joyce Banda - Bio, Facts, Family. Joyce Banda. Joyce Banda: Latest News, Videos and Joyce Banda Photos. Joyce Banda. When I was growing up, my father wanted my sisters and me to have the same opportunities our brother had. 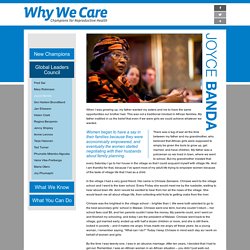 This was not a traditional mindset in African families. My father instilled in us the belief that even if we were girls we could achieve whatever we wanted. There was a tug of war all the time between my father and my grandmother, who believed that African girls were supposed to simply be given the tools to grow up, get married, and have children.

My father was a policeman so we lived in town, where we went to school. But my grandmother insisted that every Saturday I go to her house in the village so that I could acquaint myself with village life. In the village I had a very good friend. Chrissie was the brightest in the village school – brighter than I. I remarried later, this time to a fine man. Around this time I started to travel and interact with women’s organizations. As I traveled across the country, going from village to village, I would meet women and girls who were stuck. Joyce Banda: 'We must own the fight' Not directly elected to her office, Joyce Banda assumed the presidency of Malawi last year when her predecessor suddenly died of a heart attack. 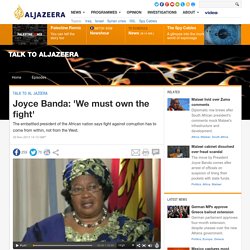 But she is leading a democracy and next year, the people of Malawi will decide if Banda will remain president - she is already fighting for her political life. Despite promises to clean up corruption, new scandals have surfaced. In September, an accountant in her office was found with $3274.40 in his home. Later an official with the environment ministry was found with $311,068 in his car. Then, the country's budget director - her point man in dealing with government funds - was shot three times in the head. Joyce Banda: Malawi's first female president. Joyce Banda, who has made history becoming Malawi's first female president and only the second woman to lead a country in Africa, has a track record of fighting for women's rights. 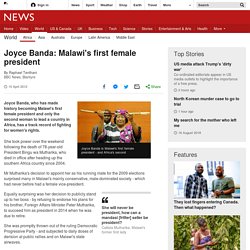 She took power over the weekend following the death of 78-year-old President Bingu wa Mutharika, who died in office after heading up the southern Africa country since 2004. Mr Mutharika's decision to appoint her as his running mate for the 2009 elections surprised many in Malawi's mainly conservative, male-dominated society - which had never before had a female vice-president. Equally surprising was her decision to publicly stand up to her boss - by refusing to endorse his plans for his brother, Foreign Affairs Minister Peter Mutharika, to succeed him as president in 2014 when he was due to retire. She was promptly thrown out of the ruling Democratic Progressive Party - and subjected to daily doses of derision at public rallies and on Malawi's state airwaves.

Charity work Sackings. Joyce Banda spearheads the fight for gender equality. Methil Renuka Last Updated: 12 February 2015|16:10 GMT After an election defeat and a nearly seven-week trip to the US, Malawi’s former head of state Joyce Banda heads home this weekend. Malawi’s former head of state Joyce Banda. PHOTO: Jay Caboz. Joyce Banda (@DrJoyceBanda) Joyce Banda. Joyce Banda, Malawi’s first and Africa’s second female President, could not have come onto the stage at a better time, particularly since the African Union declared 2010 to 2020 African Women’s Decade. Together, she and I can talk about the situation in Africa and what can be done by all our countries, working together in strong partnership, to build bridges and democracies and get our institutions and economies strong again.

Joyce Banda Quotes. Joyce Banda. Joyce Banda. An educator and grassroots women's rights activist, she was Minister of Foreign Affairs from 2006 to 2009 and Vice-President of Malawi from May 2009 to April 2012.[2] Banda took office as president following the sudden death of President Bingu wa Mutharika. She was Malawi's fourth president[3] and its first female president. Before becoming president, she served as the country's first female vice-president.[4] She was a member of parliament and Minister for Gender, Children's Affairs and Community Services. Dr. Joyce Banda - Lilongwe, Malawi - Public Figure. Joyce Banda.

A document titled ‘JB Project’ which Malawi Minister of Information, Tourism and Culture Kondwani Nankhumwa cited to call upon President Peter Mutharika to commission a special inquiry over the death... Speaker Profile and Speaking Topics. An entrepreneur, activist, politician and a philanthropist, Her Excellency Dr. Joyce Banda became president is Former President of the Republic of Malawi having ruled Malawi from 2012 -2014. She is Malawi’s first female president and Africa’s second. Voted as Africa's most powerful woman by Forbes Magazine for two years running and voted as one of the most powerful women in the world, Her Excellency Dr. Welcome to Forbes. About Us - Joyce Banda Foundation - "Putting Money In The Pockets of the Poor" Our Founder. Joyce Banda Foundation - "Transforming Malawi from the Grassroots" Joyce Banda: Malawi's first female president.