Richard Reitman Photography. Myanmar Forum, Travel Discussion for Myanmar. Kyats / US$/ ATM's / Credit Cards in Myanmar - Myanmar Message Board. Much information on the internet is well out of date and it is now appropriate to state as accurately as possible the up to date facts gleaned, from not only my own personal experiences, but from many other regulars, both tourists and local contributors. 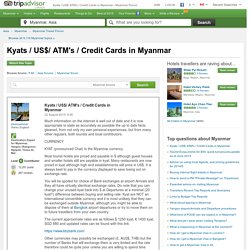 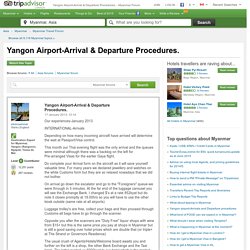 Our experiences-January 2013 INTERNATIONAL-Arrivals Depending on how many incoming aircraft have arrived will determine the wait at Passport/Visa control. Tipping in Myanmar - Myanmar Forum. 1. 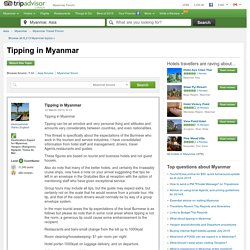 Re: Tipping in Myanmar When looking at the tipping expectations of the Burmese it is useful to measure the amounts against their earnings. There is a deep concern that tipping, of amounts that may seem normal or even modest to some nationalities, could be excessive. This could distort the labour market whereby those in the tourists industry earn more than qualified professionals such as doctors and teachers.

This has happened to other countries with developing tourism with doctors and lecturers becoming guides leaving a severe shortage of qualified staff, to the detriment of health and education in those countries. Coffee and massage in Burma. Walk in any direction in many Asian cities and you will run into a house of massage. 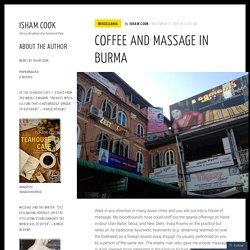 My bloodhound’s nose could sniff out the sparse offerings on hand in dour Ulan Bator, Seoul, and New Delhi. India frowns on the practice but relies on its traditional Ayurvedic treatments (e.g. streaming warmed oil over the forehead) as a foreign-tourist draw, though it’s usually performed on you by a person of the same sex. Underwhelmed in Myanmar: When Travel Expectations Interfere. Rudyard Kipling said, “This is Burma, and it will be quite unlike any land you know about.” 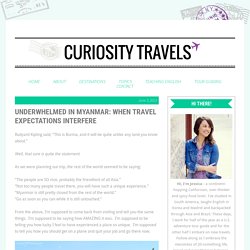 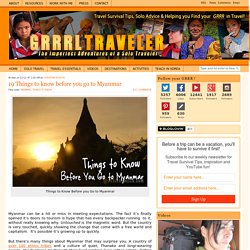 The fact it’s finally opened it’s doors to tourism is hype that has every backpacker running to it, without really knowing why. Useful phrases in Burmese. 5 Burmese (Myanmar) Phrases to Impress Locals. Burma and Myanmar: From Junta Repression to Luxury Tourism. It's happy hour in the bar of The Strand hotel in Yangon. 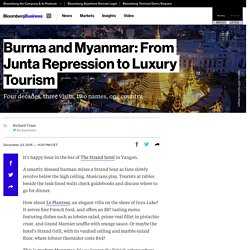 A smartly dressed barman mixes a Strand Sour as fans slowly revolve below the high ceiling. Musicians play. Tourists at tables beside the teak-lined walls check guidebooks and discuss where to go for dinner. How about Le Planteur, an elegant villa on the shore of Inya Lake? It serves fine French food, and offers an $87 tasting menu featuring dishes such as lobster salad, prime veal fillet in pistachio crust, and Grand Marnier souffle with orange sauce. This is modern Myanmar. In 1992 the country was ruled by the State Law and Order Restoration Council, the fearsome junta that held onto power even after Aung San Suu Kyi's National League for Democracy won a general election in 1990.

Visiting then as part of a group of Hong Kong-based foreign journalists invited to see that things really weren't as bad as they were reported overseas, one thing quickly became clear: they were. Travelling in Myanmar. What to see and where to stay the cheapskates guide Views from Sagaing I have always stayed at the Royal Guest house and occasionally ET and close by is garden and Nylon as a cheapskate I’m only going to recommend clean and basic, although many new Guest houses are now opening up their doors to foreigners and you are still only allowed to stay at Guest houses registered to foreigners and at present there are no homestays or couch surfing allowed. 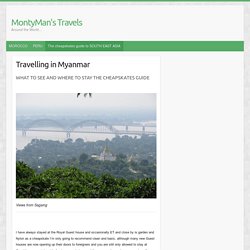 It is technically still restricted for locals to put you up in their homes but with friends it is becoming easier. Yin YinA y at Royal Guest house Mandalay has left the building this year. For all those who have stayed here, knew her and remember her, she was receptionist and technically Manageress. For all those here who have stayed here over the years she will be sorely missed. Myanmar Travel Blog. Myanmar In Deep: Inle Lake Tyler Dillon | May 1, 2015 See + Do | Must Sees Replete with thatched cottages, long boats and the famed Intha rowers, on Inle Lake one gets a sense of serenity, observing a more... 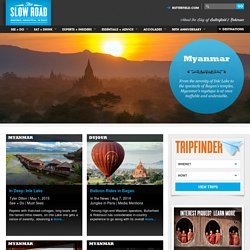 DuJour. Myanmar/Burma for a couple of weeks. After my short stay in Yangon (I returned at the end of the trip to see more) I went to spend several days in the Northwest of the country with a stop in Sittwe and then several days in Mrauk U. 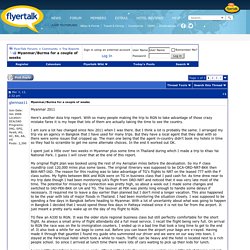 Unfortunately about six month after my visit there was a major inter-ethnic conflagration in Rakhine State between the Rohingya Muslim minority and the majority Buddhists. Why Right Now is the Time to Visit Myanmar. It's a nation on the cusp of great change, and there's never been a better time to go than right now. Find out why T+L has annointed it "Destination of the Year. " You might not want to go to Myanmar yet. You might want to wait until the country, formerly Burma, becomes a full-fledged democracy, possibly led by Daw Aung San Suu Kyi, winner of the Nobel Peace Prize and icon of righteous courage. Burma and Myanmar: From Junta Repression to Luxury Tourism.

Burma travel advice. The FCO advise against all but essential travel to Rakhine State except for the tourist resort of Ngapali and travel to/from the resort via Thandwe airport. See Local travel The FCO advise against all but essential travel to Kachin State (except the towns of Myitkyina, Bhamo and Putao) due to continued risk of armed conflict. See Local travel. A Comprehensive Guide to Travelling in Myanmar / Burma: What You Should Know Before You Arrive. Myanmar is hot on the Southeast Asia travel trail right now, but as a country which has only recently opened its doors to tourism, travelling here means facing many challenges that you do not necessarily encounter on the same scale as other countries in the region.

Infrastructure is only just beginning to spring into life and the art of the tourist trade is still in the developing process, yet every second of the long journey times, the energy expended in the daily frustrations and the patience and sign language needed to cross the language barrier is worth it for the rewarding experience you will have in this beautiful and still very much untouched country. Be prepared for the different way of travelling you will encounter in Myanmar, and don’t believe the scaremongering about the ridiculous expense and immense difficulties that are putting many people off travelling here. 1. Money, Exchange and ATM’s Brand new dollar bills. A 2015 Travel Guide to Myanmar (Burma) There are many blog posts floating around the web about travel in Myanmar, and nearly all of them are outdated. KGB's Travels: Myanmar - May 2013. Tipping in Myanmar - Myanmar Message Board.

1. Re: Tipping in Myanmar When looking at the tipping expectations of the Burmese it is useful to measure the amounts against their earnings. There is a deep concern that tipping, of amounts that may seem normal or even modest to some nationalities, could be excessive. This could distort the labour market whereby those in the tourists industry earn more than qualified professionals such as doctors and teachers.

You know a destination is red-hot when its river-cruising scene explodes. One of Myanmar's most stunning reclining Buddhas is the Chaukhtatgyi Buddha​ housed within an open-sided metal shed in Yangon. The arid Bagan plain is studded with more than 2500 Buddhist monuments and a hot air balloon ride is a great way to see them. Fishermen on Inle Lake are known for their distinctive "leg-rowing" technique. Many Myanmar women and children apply a fragrant creamy paste known as thanaka to their faces in decorative patterns. After historic democratic elections in 2010 sparked reforms, the time-warped country that was under military rule for almost five decades is now a magnet for curious travellers. As international visitors flock (numbers soared from 790,000 in 2010 to more than 3 million last year), Myanmar is changing rapidly. See aptouring.co.nz. 5. 11 things to know before visiting Myanmar.

The Burmese make a big deal of the New Year.