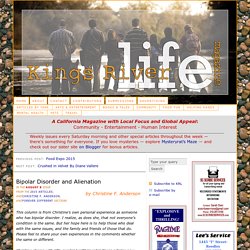 Anderson This column is from Christine’s own personal experience as someone who has bipolar disorder. Daily Mood Journaling / Tracking Page. This template is primarily aimed at those suffering from Bipolar disorder or depression. 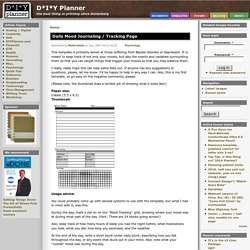 It is meant to keep track of not only your moods, but also the events and variables surrounding them so that you can target things that trigger your moods so that you may balance them. I really, really hope this can help some folks out. If anyone has any suggestions or questions, please, let me know. A Private Madness: The Genius of Elinor Wylie - Evelyn Helmick Hively. 10 Writers' Mental And Physical Maladies. The honors list of English literature is a roll call of dysfunction. 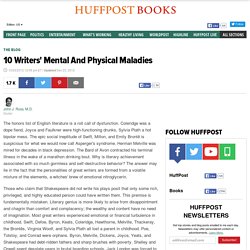 Coleridge was a dope fiend, Joyce and Faulkner were high-functioning drunks, Sylvia Plath a hot bipolar mess. The epic social ineptitude of Swift, Milton, and Emily Brontë is suspicious for what we would now call Asperger's syndrome. Herman Melville was mired for decades in black depression. The Bard of Avon contracted his terminal illness in the wake of a marathon drinking bout. 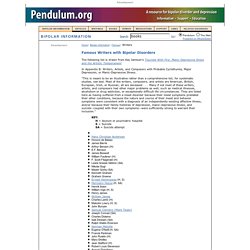 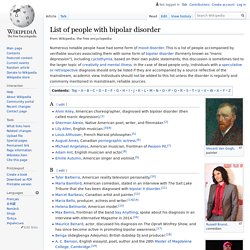 Regarding posthumous diagnoses: many famous people are believed to have been affected by bipolar disorder. Most of these listed have been diagnosed based on evidence in their own writings and contemporaneous accounts by those who knew them. It is often suggested that genius (or, at least, creative talent) and mental disorder (specifically, the mania and hypomania of bipolar disorder) are linked; the connection was widely publicized by Kay Redfield Jamison in Touched with Fire, although many of the diagnoses in the book are made by Jamison herself. How the Creativity of Bipolar Minds Affects Art & Science. The artistic drive in many historical figures has been characterized as an inner madness driving them to create. 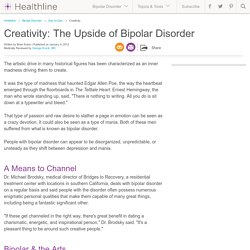 It was the type of madness that haunted Edgar Allen Poe, the way the heartbeat emerged through the floorboards in The Telltale Heart. Ernest Hemingway, the man who wrote standing up, said, "There is nothing to writing. All you do is sit down at a typewriter and bleed. " That type of passion and raw desire to slather a page in emotion can be seen as a crazy devotion. Finding the Treatment Options that Suck Less. Welcome to Crazymeds, where you can learn what’s good, what’s bad, what’s interesting, and what’s plain weird and funny about the medications used to treat depression, bipolar disorder, schizophrenia, epilepsy, migraines, anxiety, neuropathic pain, or whatever psychiatric and/or neurological condition you might have. 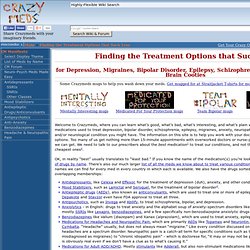 The information on this site is to help you work with your doctor(s) to find the right treatment options. Too many of us get nothing more than 15-minute appointments with overworked doctors or nurse-practitioners, so we need all the help we can get. We need to talk to our prescribers about the best medication1 to treat our conditions, and not the most profitable ones, or the cheapest ones2. Top Ten Terrific Things About Bipolar Disorder : bipolar. How Do You Find Love With Bipolar Disorder. A Dating Reality Her condition affects so much of her life that she tells anyone new she meets about it pretty quickly. 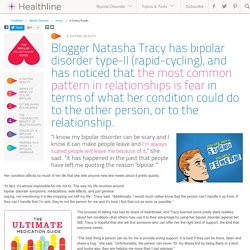 “In fact, it’s almost impossible for me not to. The way my life revolves around bipolar disorder symptoms, medications, side effects, and just general coping, not mentioning it is like cropping out half my life,” Tracy said. “Additionally, I would much rather know that the person can’t handle it up front. "I am bipolar" vs "I have bipolar disorder" : bipolar. The Bipolar Meeting Point. How Do You Find Love With Bipolar Disorder. Top Ten Terrific Things About Bipolar Disorder : bipolar. 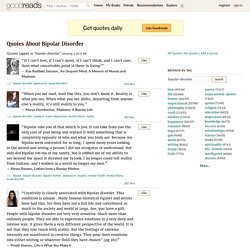 I almost say, What do you know about it? But I make myself breathe and smile. “Is that the Jekyll-Hyde thing?” My voice sounds flat and even. 100 tips for Bipolar Disorder.