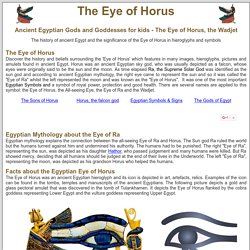 They were combined, in various ways, to measure the unit capacity for grains, medicines and pigments. It was a quantification system to measure parts of a whole. Ancient Egyptian Hieroglyphics. The term hieroglyphics refers to a system of writing using ancient Egyptian symbols. 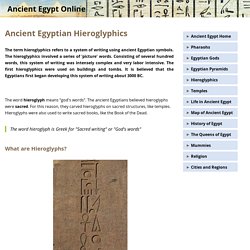 ©Aleksandar Cocek - Hieroglyphs at Karnak Scholars have discovered that there are three different classes of Egyptian hieroglyphics. Phonograms are signs that represent a specific sound. The Egyptian language did not have written vowels, so the exact pronunciation of ancient Egypt is not known. Hieroglyphs are read vertically, horizontally, from right-to-left or from left-to-right.

Some objects had inscriptions that were read in two or more directions. Flute History. While the term "flute" refers to a broad number of instruments which are found in many different cultures, we will be exploring the history of our modern flute. 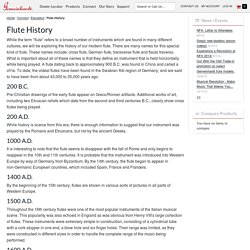 There are many names for this special kind of flute. These names include: cross flute, German flute, transverse flute and flauto traverso. What is important about all of these names is that they define an instrument that is held horizontally while being played. A flute dating back to approximately 900 B.C. was found in China and called a ch'ie. To date, the oldest flutes have been found in the Swabian Alb region of Germany, and are said to have been from about 43,000 to 35,000 years ago. Pre-Christian drawings of the early flute appear on Greco/Roman artifacts. While history is scarce from this era, there is enough information to suggest that our instrument was played by the Romans and Etruscans, but not by the ancient Greeks. HISTORY OF CLOCKS.

Time Time, a central theme in modern life, has for most of human history been thought of in very imprecise terms. 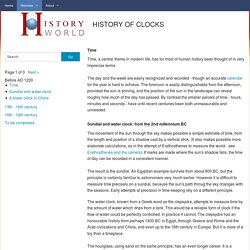 The day and the week are easily recognized and recorded - though an accurate calendar for the year is hard to achieve. The forenoon is easily distinguishable from the afternoon, provided the sun is shining, and the position of the sun in the landscape can reveal roughly how much of the day has passed. By contrast the smaller parcels of time - hours, minutes and seconds - have until recent centuries been both unmeasurable and unneeded. Sundial and water clock: from the 2nd millennium BC. History of the Piano. The story of the piano begins in Padua, Italy in 1709, in the shop of a harpsichord maker named Bartolomeo di Francesco Cristofori (1655-1731). 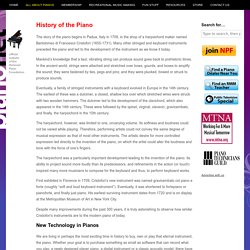 Many other stringed and keyboard instruments preceded the piano and led to the development of the instrument as we know it today. Mankind’s knowledge that a taut, vibrating string can produce sound goes back to prehistoric times. In the ancient world, strings were attached and stretched over bows, gourds, and boxes to amplify the sound; they were fastened by ties, pegs and pins; and they were plucked, bowed or struck to produce sounds. Eventually, a family of stringed instruments with a keyboard evolved in Europe in the 14th century.

The earliest of these was a dulcimer, a closed, shallow box over which stretched wires were struck with two wooden hammers. History of DVD development and birth of the DVD Forum. When Philips and Sony got together to develop CD, there were just the two companies talking primarily about a replacement for the LP. 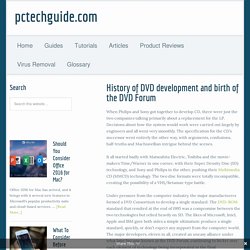 Decisions about how the system would work were carried out largely by engineers and all went very smoothly. The specification for the CD’s successor went entirely the other way, with arguments, confusions, half-truths and Machiavellian intrigue behind the scenes. It all started badly with Matsushita Electric, Toshiba and the movie-makers Time/Warner in one corner, with their Super Density Disc (SD) technology, and Sony and Philips in the other, pushing their Multimedia CD (MMCD) technology. The two disc formats were totally incompatible, creating the possibility of a VHS/Betamax-type battle.

Under pressure from the computer industry, the major manufacturers formed a DVD Consortium to develop a single standard.