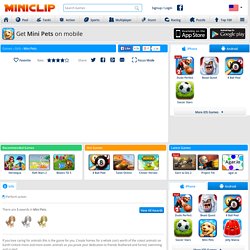 View All Awards If you love caring for animals this is the game for you. Create homes for a whole zoo’s worth of the cutest animals on Earth! Unlock more and more exotic animals as you prove your dedication to friends feathered and furred, swimming and scaled. Be sure to hire enough caretakers to look after your pets and don’t forget to feed them when they’re hungry. The more Mini Pets you collect, the more people will want to visit your shelter. Paul habans time capusal. Css Survey. Challenge: Colorful creature. Tech Team Ten Student Survey. Tech Team Ten Student Survey. Space Shuttle and International Space Station. Launch Viewing Passes Launches are always subject to unanticipated delays and changes. 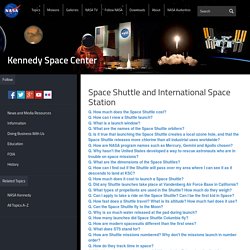 For updated information, please call1-877-893-NASA (6272) for the KSC launch status report. For up-to-date information on the next launch, check out the NASA Launch Schedule link below. NASA Launch Schedule Back to Top Q. Sometimes, this window is determined by the passing of an orbiting spacecraft with which the orbiter must rendezvous, such as the International Space Station or an ailing satellite. For more information, please click on the launch window link below. Launch Window Q. I Need Help June 17 - Google Sheets. I Need Help June 17 - Google Sheets. Log in. Virgin Galactic, the world's first commercial spaceline.

SpaceX: First Private Flights to Space Station. Space Exploration Technologies (better known as SpaceX) is the first company to ship private cargo to the International Space Station using its own rocket and spaceship, the Dragon. 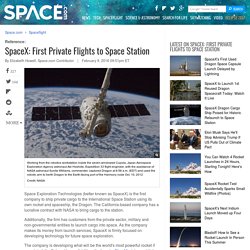 The California-based company has a lucrative contract with NASA to bring cargo to the station. Additionally, the firm has customers from the private sector, military and non-governmental entities to launch cargo into space. As the company makes its money from launch services, SpaceX is firmly focused on developing technology for future space exploration. The company is developing what will be the world's most powerful rocket if completed: the Falcon Heavy. Additionally, founder Elon Musk has publicly speculated about the possibility of Mars colonies. Musk's fortune Musk made his fortune very early in life: by age 30, in 2002, he had accumulated a reported $300 million and was looking for his next big venture. Initially, Musk had the idea of sending a greenhouse to the Red Planet, dubbed the "Mars Oasis.

" Wantickets United States - United States Wantickets Events. Is a Virgin Galactic seat worth $250,000? For decades, none but a few privileged -- and highly trained -- individuals could dare dream of traveling beyond Earth's orbit. 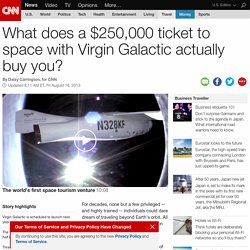 All that's set to change as Richard Branson brings space exploration to the (mega-rich) masses. In April, Virgin Galactic -- a subsidiary of Branson's Virgin Group -- hit a milestone. The rocket motor the company had been testing on the ground was fitted into SpaceShip Two, the spacecraft that, from next year onwards, will bring space travel to the general public. "We lit the rocket motor for the first time in the air and the spaceship went through the sound barrier," recalls Stephen Attenborough, Virgin Galactic's commercial director. "It was a hugely significant milestone for us, and in many ways, the last big piece of the jigsaw. " Read more: Virgin Galactic one flight closer to space tourism Though a ticket aboard SpaceShip Two doesn't come cheap -- a seat currently costs $250,000 -- Attenborough maintains that as things stand, the fare is a relative bargain. Latest (JPEG Image, 720 × 540 pixels) 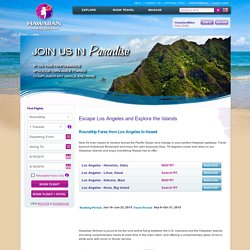 Travel beyond Hollywood Boulevard and enjoy the calm turquoise blue, 78 degrees ocean and relax on our Hawaiian Islands and enjoy everything Hawaii has to offer. Hawaiian Airlines is proud to be the only airline flying between the U.S. mainland and the Hawaiian Islands providing complimentary meals at meal time in the main cabin, and offering a complimentary glass of red or white wine with lunch or dinner service. Fly with us and experience Hawaiian hospitality on the airline recognized for service, on-time performance, and overall airline quality.It’s another beautiful day in Hawaii.