There Were Some Completely Absurd Reactions To The Google Doodle Celebrating The Discovery Of Lucy. Finally, Most Young Americans Now Accept Evolution Over Creationism. MrsGarrisonsClub WE BELIEVE in the theory of evolution. Louisiana Teachers Are Using The Bible in Science Class. A freedom of information request has confirmed what activists have been warning for years, the bible is being used in high school science classrooms to promote creationism. 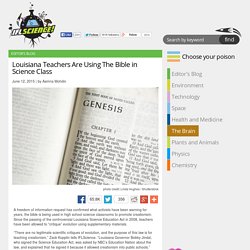 Since the passing of the controversial Louisiana Science Education Act in 2008, teachers have been allowed to “critique” evolution using supplementary materials. “There are no legitimate scientific critiques of evolution, and the purpose of this law is for teaching creationism,” Zack Kopplin tells IFLScience. “Louisiana Governor Bobby Jindal, who signed the Science Education Act, was asked by NBC’s Education Nation about the law, and explained that he signed it because it allowed creationism into public schools.” Kopplin has been heavily campaigning to have the law repealed since he was a high school student. Creationist Makes Significant Fossil Discovery And Won't Accept That It's 60 Million Years Old. Even in the most intense pitched battles, moments of cooperation can occur. 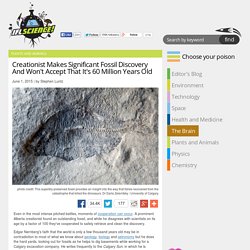 A prominent Alberta creationist found an outstanding fossil, and while he disagrees with scientists on its age by a factor of 100 they've cooperated to safely retrieve and clean the discovery. Edgar Nernberg's faith that the world is only a few thousand years old may be in contradiction to most of what we know about geology, biology and astronomy but he does the hard yards, looking out for fossils as he helps to dig basements while working for a Calgary excavation company. Creationism in public schools, mapped. Where tax money supports alternatives to evolution. A large, publicly funded charter school system in Texas is teaching creationism to its students, Zack Kopplin recently reported in Slate. 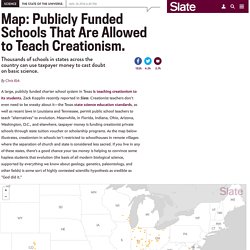 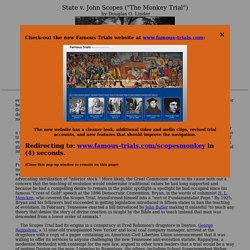 Traditionalists, the older Victorians, worried that everything valuable was ending. Younger modernists no longer asked whether society would approve of their behavior, only whether their behavior met the approval of their intellect. Intellectual experimentation flourished. Americans danced to the sound of the Jazz Age, showed their contempt for alcoholic prohibition, debated abstract art and Freudian theories. Group Files Lawsuit Against Kansas For Teaching Science In Science Class. A group with the deeply Orwellian name Citizens for Objective Public Education (COPE) have lost their lawsuit to stop the Kansas State Board of Education teaching evolution. 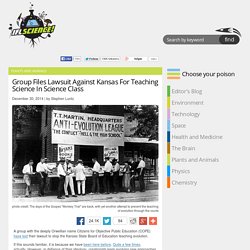 If this sounds familiar, it is because we have been here before. Quite a few times, actually. However, in defiance of their ideology, creationists keep evolving new approaches in response to the courts' determination that you can't will away a mountain of scientific evidence based on your interpretation of a single ancient book. The cause of this latest flare-up is a result of the Next Generation Science Standards drawn up by 26 states in cooperation with the National Research Council. The standards are based on the idea that, “Science—and therefore science education—is central to the lives of all Americans, preparing them to be informed citizens in a democracy and knowledgeable consumers.”

COPE's novel argument was that evolution promotes atheism, whose teaching violates the separation of the church and state. Charles Darwin. Video Museum curator George Beccaloni introduces us to Charles Darwin, the most famous biologist in history, in this video. 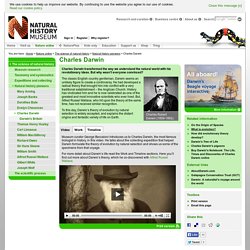 He talks about the collecting expedition that helped Darwin formulate the theory of evolution by natural selection and shows us some of the specimens from that voyage. For more detail about Darwin’s life read the Work and Timeline sections. Here you’ll find out more about Darwin’s theory, which he co-discovered with Alfred Russel Wallace. Work The young naturalist Born in 1809, Darwin was fascinated by all living things from a young age. In 1825 he became a medical student at the University of Edinburgh but was so traumatised by an operation performed on a child without anaesthetic that he gave up his studies without completing the course. 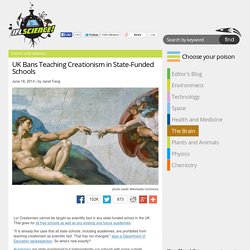 Creationism cannot be taught as scientific fact in any state-funded school in the UK. That goes for all free schools as well as any existing and future academies. Podcast : Darwin anniversary. Bill Nye Debates Ken Ham. Researcher Finds Support For One Of Darwin's Controversial Theories. When Charles Darwin first put forward his revolutionary theory of evolution, he was met with considerable opposition and skepticism from both scientific and religious circles. 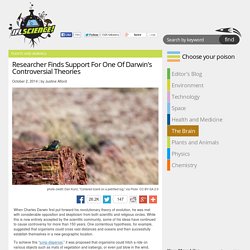 While this is now entirely accepted by the scientific community, some of his ideas have continued to cause controversy for more than 150 years.