Re-Create the DataHand - Thumb cluster under development. Project 75% done. Assembly of the first prototype is completed. 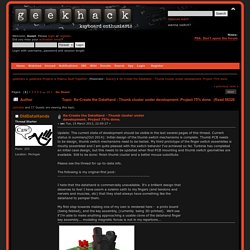 I made one error inplacement, resulting in the holes for the opto components for thecenter pushbutton being in the wrong position. This necessitated a bitof an ugly hack to make up for the traces I needed to drill through inorder to allow the components to sit where they need to sit, but nofunctional difference, or visible difference from above.

This is what it looks like assembled: The switches work well in a dark room, but the translucent plastic,and room lights are enough to cause trouble. The next version willhave the phototransistors more protected from ambient light, and blackplastic should help. This is the circuit: Here is a scope trace of the micro input as keys are scanned: There is one electrical phenomena which I do not understand: When the74238 output turns on, it drives one LED and phototransistor pair.The transistor seems to turn fully on momentarily after voltage isapplied to it's collector. 11" x 14" Plexiglass Sheet. Standard Delivery 48 Contiguous United States Orders are shipped via UPS or USPS. 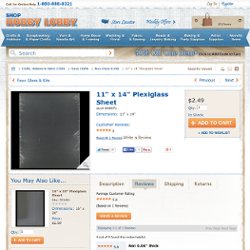 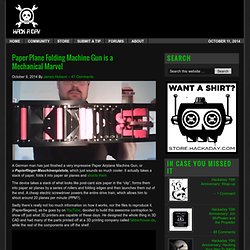 It actually takes a stack of paper, folds it into paper air planes and shoots them. The device takes a stack of what looks like post-card size paper in the “clip”, forms them into paper air planes by a series of rollers and folding edges and then launches them out of the end. A cheap electric screwdriver powers the entire drive train, which allows him to shoot around 20 planes per minute (PPM?). Sadly there’s really not too much information on how it works, nor the files to reproduce it. [Papierfliegerei], as he goes by on YouTube, decided to build this awesome contraption to show off just what 3D printers are capable of these days.

Let’s see him upgrade that electric screwdriver with a Dremel…. [via r/videos] DIY Bookbinding: Step 3. How to Make a Hardcover BookStep 3: Covering the Cover Back the to Previous Step Back to "Projects" PageHome To make the book cover, boards and spine needed to be assembled into a single unit. 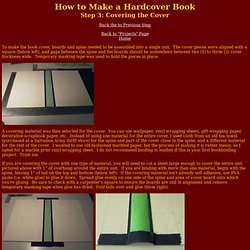 The cover pieces were aligned with a square (below left), and gaps between the spine and the boards should be somewhere between two (2) to three (3) cover thickness wide. Temporary masking tape was used to hold the pieces in place. A covering material was then selected for the cover. Fully Automatic Can Crusher. Hartmut esslinger's early apple computer and tablet designs. Dec 18, 2012 hartmut esslinger's early apple computer and tablet designs hartmut esslinger’s early apple computer and tablet designs ‘apple macphone’image courtesy of hartmut esslinger in german designer hartmut esslinger’s new book ‘design forward‘, the founder of frog design overviews ‘strategic design’, and how innovative progression has sparked creative change in the consumer market, especially for one of the most successful american companies ever built: apple. the official book launch happened at the opening event of an exhibition ‘german design standards – from bauhaus to globalisation’ on german design classics, during the BODW 2012 business of design week in hong kong. the exhibition has been a collaboration between the hong kong design institute (HKDI), the neue sammlung – the international design museum munich – and the red dot design museum in essen, germany. apple snow white 3 ‘macphone’, 1984image courtesy of hartmut esslinger apple IIC, 1983image courtesy of hartmut esslinger. 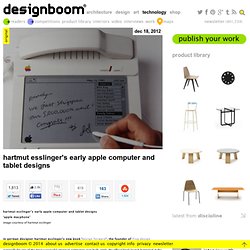 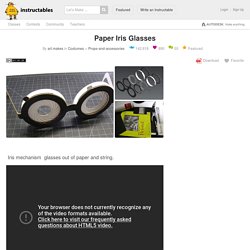 Ads are based on both AdWords data and behavioral data that we collect while you’re on our sites. The data we collect may include pages you’ve visited, trials you’ve initiated, videos you’ve played, purchases you’ve made, and your IP address or device ID. This information may be combined with data that AdWords has collected from you. We use the data that we provide to AdWords to better customize your digital advertising experience and present you with more relevant ads. LiveRamp We use LiveRamp to deploy digital advertising on sites supported by LiveRamp.