So you want to install a Garnier limb? Author’s note: This post was originally published in late 2008, and for those of you about to try your hand at treehouse construction and setting Garnier limbs, I hope this gives you a good start. 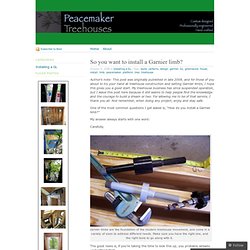 My treehouse business has since suspended operation, but I leave this post here because it still seems to help people find the knowledge and the courage to build a dream or two. For allowing me to be of that service, I thank you all. And remember, when doing any project, enjoy and stay safe. One of the most common questions I get asked is, “How do you install a Garnier limb?” My answer always starts with one word: Carefully. Garnier limbs are the foundation of the modern treehouse movement, and come in a variety of sizes to address different needs. Auto-construction: une cabane dans les arbres. 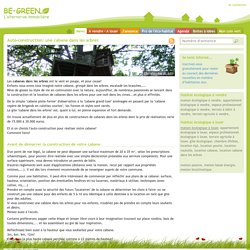 How to build a treehouse: Treehouse Workshop TAB/GL Installation. Gallery: 25 Insane Treehouses. It will go something like this “Dad, I want a treehouse” and I’ll say “No” and he’ll say “Why?” 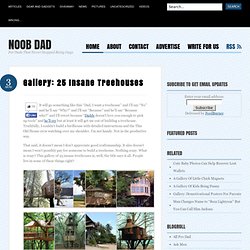 And I’ll say “Because” and he’ll say “Because why?” And I’ll retort because “Daddy doesn’t love you enough to pick up tools” and he’ll cry but at least it will get me out of building a treehouse. Truthfully, I couldn’t build a birdhouse with detailed instructions and the This Old House crew watching over my shoulder. I’m not handy. Not in the productive way. That said, it doesn’t mean I don’t appreciate good craftsmanship. HemLoft, a Canadian Treehouse. Even with good knowledge of the woods it took Joel months to find just the right tree to carry the treehouse two architect friends helped him to design. 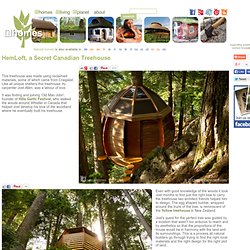 The egg shaped bubble, wrapped around the trunk of the tree, is reminiscent of the Yellow treehouse in New Zealand. Joel's quest for the perfect tree was guided by a location that wasn't too arduous to reach and by aesthetics so that the proportions of the house would be in harmony with the land and its surroundings. This is a process all natural builders go through trying to find the right local materials and the right design for the right plot of land.

Joel has come to realise that building this tiny place in the trees was an expression of his personality, something all too often people don't get the opportunity to discover when they buy a home designed for an off-the-peg person which has never existed. The treehouse sits amongst Canadian Hemlock from which it takes its name, The HemLoft. World's best treehouse builders: Treehouse Workshop October 2010. Sri Lanka Shipping Container Retreat. A friend and fellow tiny house lover recently sent me this link from Container Home on this shipping container cabin retreat in Sri Lanka. 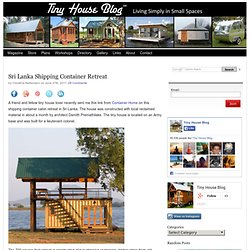 The house was constructed with local reclaimed material in about a month by architect Damith Premathilake. The tiny house is located on an Army base and was built for a lieutenant colonel. The 700 square foot retreat is constructed of two shipping containers, timber strips from old bunkers and weapons boxes and used railway sleepers. It is designed to embrace the views and climate of the surrounding environment, and create a place of relaxation and beauty while using already available resources.

Photos by Logan MacDougall Pope. So you want to install a Garnier limb? DIY treehouse inventor creates Ewok world in rural Oregon. TREEHOUSE. Build Your Own Treehouse by Maurice Barkley - Reviews, Description & more - ISBN#9781402737770. How Tree Houses Work" What did Roman emperor Caligula, Winston Churchill and John Lennon all have in common? 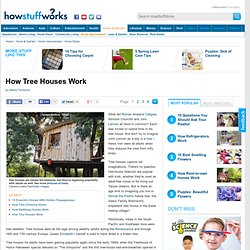 Each was known to spend time in his tree house. But don't try to imagine John Lennon as a boy in a tree -- these men were all adults when they enjoyed the view from lofty limbs. Tree houses capture our imaginations. There's no question tree-house hideouts are popular with kids, whether they're used as adult-free zones or for living out Tarzan dreams. But is there an age limit to imagining you live in Winnie the Pooh's hollow tree, the Swiss Family Robinson's shipwreck tree house or the Ewok treetop village?

Historically, tribes in the South Pacific and Southeast Asia were tree dwellers. Tree houses for adults have been gaining popularity again since the early 1990s when the Treehouse of Horror Halloween special debuted on "The Simpsons" and the first tree-house bed-and-breakfast opened in Takilma, Ore. Out On A Limb. Out'n'About treehouse construction. Tree House. This past weekend at Derek “Deek” Diedricksen’s “Relaxshacks.com Tiny House Building and Design Workshop” in Memphis, TN (at the Joe Everson compound of www.TennesseeTinyHomes.com), we worked on FOUR builds: a tiny house, a tiny office cabin, a tree house (future airbnb.com listing), and another full out tiny home from tinyhappyhomes.com. 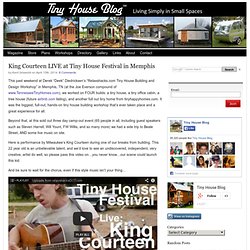 It was the biggest, full-out, hands-on tiny house building workshop that’s ever taken place and a great experience for all. Beyond that, at this sold out three day camp-out event (65 people in all, including guest speakers such as Steven Harrell, Will Yount, FW Willis, and so many more) we had a side trip to Beale Street, AND some live music on site. Here is performance by Milwaukee’s King Courteen during one of our breaks from building. TreeHouse Workshop, Located in Seattle, builders specializing in treehouse design and tree house construction for adults and kids. Photos, Biome. English Saint-Nicolas Québec, Canada Copyright © 2005 Biome. 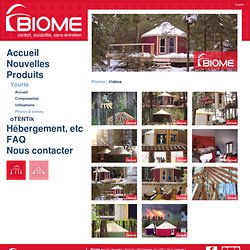 Baumraum Treehouses. Some of us think that our far off ancestors lived in the trees — and during our childhood, when our thoughts and memories are most pure, we yearn to climb trees growing in our gardens, in our parks, in our cities. 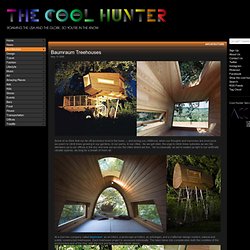 As we get older, the urge to climb trees subsides as we ride elevators up to our offices in the sky and look out across the cities where we live. Yet occasionally, as we’re sealed up tight in our artificially climatic spaces, we long for a breath of fresh air. At a German company called baumraum an architect, a landscape architect, an arbologist, and a craftsman design modern, natural and solidly constructed treehouses.

Each treehouse project is assessed individually. The team takes into consideration both the condition of the environment and of the tree, with the size and features the clients desire. baumraum offers a range of wood-types as well as options for insulated walls. Sound like something you’ve been wanting? Baumraum Treehouses. Tree Houses For Your Spouses. Dear Treehouses, I’ve always wanted to live in one of you. 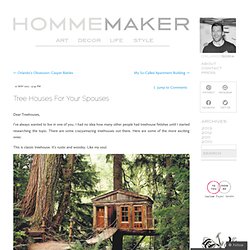 I had no idea how many other people had treehouse fetishes until I started researching the topic. There are some crazyamazing treehouses out there. Here are some of the more exciting ones: Vivre Perché inc - Construction de cabanes dans les arbres, pont suspendu, tyrolienne zip line, parcours d'hebertisme. Galerie de Roderick Romero Treehouses. Cabânes dans les arbres en provence. TreeHouse Workshop, Located in Seattle, are builders specializing in treehouse design and tree house construction for adults and kids.