Rori Feldman is the attorney responsible for the content of this website. Jonathan S. Harris, Matthew Shaffer & Arthur Schechter are Board Certified in Personal Injury Trial Law by the Texas Board of Legal Specialization. Unless indicated otherwise, attorneys are not board certified. Principal office is in Houston, Texas.

What Is the Outer Continental Shelf Lands Act (OCSLA)? There are many maritime laws that protect workers on vessels in coastal and international waters. 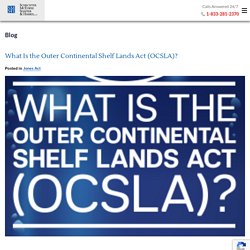 Your Legal Rights as a Seaman – a Seaman’s Legal Guide to Maritime Law. The purpose of maritime law is to govern private, international, and domestic nautical matters. 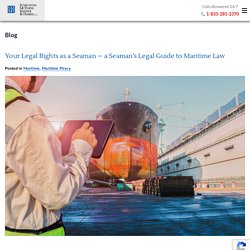 More specifically, these laws protect maritime workers who have sustained injuries and allow them to claim damages and certain benefits. We examine the different types of maritime laws, how they protect maritime workers, and where to find an offshore injury lawyer if you’ve been injured on the job. The Longshore and Harbor Workers’ Compensation Act This program compensates maritime workers who have become injured while working on or near navigable waters. Maritime Workers Suffer Slip and Fall Injuries. Maritime workers perform their duties in an unusually dangerous environment, with constantly moving decks and equipment, wet stairs and walkways, and severe weather conditions all affecting the safety of the crew. 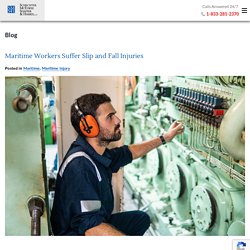 Maritime slip and fall injuries are common and, sometimes, serious enough to cause death or permanent disability. In fact, the almost half a million people employed in the U.S. maritime industry have higher rates of injury and illness than their counterparts on land, with a fatality rate almost five times higher than the average U.S. worker.1 Many of these seamen and women who are injured serving a vessel will choose to consult with a slip and fall injury lawyer to receive fair compensation. Injuries at Sea: Basic First Response Maritime Workers Should Know. Working in the maritime industry often means strenuous, difficult, and potentially dangerous working conditions. 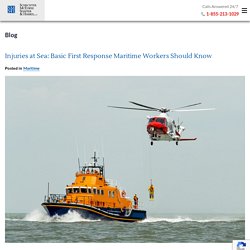 Each year maritime injury law firms represent clients who are injured, permanently disabled, or killed while working on ships or platforms at sea. These tragic consequences can sometimes be lessened by the acts of their shipmates who can provide the right first aid following an accident. Those who pursue an Able-Bodied Seaman certification must, in fact, complete basic safety training that includes CPR training,1 but all crew members should understand the basic first responses for the most common types of maritime injuries. Neck or Back Injuries at Sea Back and neck injuries can happen on a vessel because of falling, being crushed by moving cargo, being hit by swinging gear, or being struck by falling objects. What Does It Mean for a Boat to Be Unseaworthy? When you picture an unseaworthy vessel, you probably envision a rusty or rotting boat taking on water. 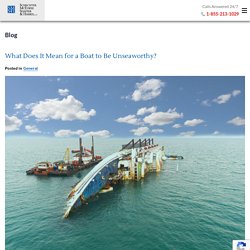 Of course, you would be right. Such a ship would certainly be deemed unseaworthy. However, under maritime law, a ship does not need to be in danger of sinking to be considered unseaworthy. There are many circumstances onboard that will determine whether the ship, equipment, and crew are considered fit for service. How the Jones Act Supports the US Navy and National Security. The United States Navy is a powerful maritime force, with active vessels on duty at all times. 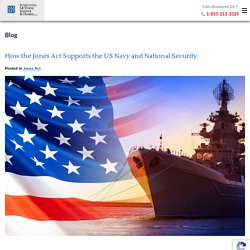 The U.S. Navy also maintains ships on standby, in case of sudden need, but they cannot undertake all sensitive operations at sea, move all cargo, and crew their ready reserve vessels instantaneously. Under the Jones Act or Merchant Marine Act of 1920, and related legislation including the Maritime Security Program or MSP, commerce between U.S. ports and all government cargo must be carried on U.S. -flagged ships. These ships are often referred to as the Jones Act Fleet, and they represent critical support services to our military. Lost or Damaged Cargo Shipping Lawsuits. When cargo is lost or damaged at sea, the costs to distributors and retailers go beyond the value of the goods themselves. 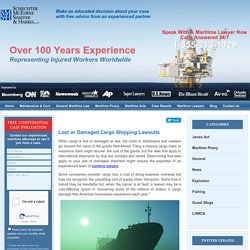 Filing a missing cargo claim or insurance claim might recover the cost of the goods, but the laws that apply to international shipments by ship are complex and varied. Determining that laws apply to your lost or damaged shipment might require the expertise of an experienced team of maritime lawyers. The Intriguing History of Maritime Law. Injury Claims for Passengers of Cruise Ships. Injury Claims for Passengers of Cruise Ships Of the millions of cruise ship passengers who sail each year, some are seriously injured or become ill while at sea. 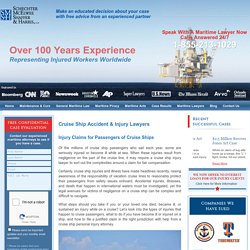 Types of Maritime Laws. The purpose of maritime law is to govern private, international, and domestic nautical matters. 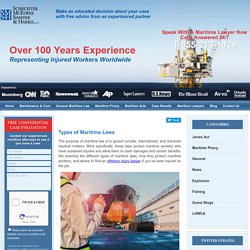 More specifically, these laws protect maritime workers who have sustained injuries and allow them to claim damages and certain benefits. We examine the different types of maritime laws, how they protect maritime workers, and where to find an offshore injury lawyer if you’ve been injured on the job. The Longshore and Harbor Workers’ Compensation Act This program compensates maritime workers who have become injured while working on or near navigable waters. Specific locations covered by this act include cargo vessel loading and unloading areas, pier and deck work sites, and ship repair spaces.

Any worker, whether employed as a shipbreaker, harbor worker, recreational vessel worker, or office and retail employee, is covered under this act. Dangers of Commercial Fishing. If you’ve ever seen reality shows about commercial fishing, you can begin to understand what makes this job so dangerous. 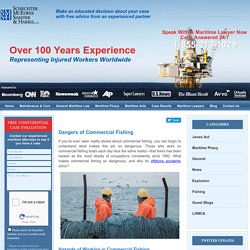 Those who work on commercial fishing boats each day face the same reality—that theirs has been ranked as the most deadly of occupations consistently since 1992. What makes commercial fishing so dangerous, and why do offshore accidents occur? Hazards of Working in Commercial Fishing. How Maritime Workers Are Exposed to Harmful Chemicals. Maritime workers must face hazardous conditions on a daily basis. To add to this, working at sea can also result in exposure to harmful chemicals, which can cause significant injury. How are maritime workers exposed, what can happen, and how can you know if you need a maritime attorney to get you compensation in court? We answer these questions and more. What Is a Hazardous Chemical? Hazardous chemicals are any that can cause negative health effects.

The Top 10 Most Common Commercial Diving Maritime Injuries. Commercial divers work in a wide range of environments, including dive boats, oil rigs, offshore platforms, and barges. They perform different types of tasks and job functions underwater that can include maintenance, repairs, construction, and even research. Just like other maritime jobs, commercial divers do have increased risks of maritime injuries and accidents compared to other types of careers. According to the Bureau of Labor Statistics, commercial divers experienced 460 nonfatal injuries and 39 fatal injuries from 2011-2017.1 Where Do Commercial Divers Work? Injured While on a Cruise Ship? You May Have a Personal Injury Claim. More and more people and families are discovering the fun and excitement of cruise ship vacations.

They can board a ship at a port in Texas, New Orleans, Miami, Port Canaveral, or New York and set off to explore new ports of calls in various countries. Passengers expect the cruise ship, cruise line, and crew to provide a level of safety and security while they are on board, as well as when they are disembarking and embarking the ship at various stops on the cruise. Even with the utmost care for their passengers, offshore accidents and personal injuries can still occur. Sometimes the accident and resulting injury could be due to the clumsiness or failure to notice posted warnings or because they entered crew-restricted areas of the ship. Jones Act Employers and Medical Care Liability. The Jones Act covers a wide range of topics related to maritime law as part of the former Merchant Marines Act. Part of the Jones Act includes employers’ responsibilities and liability for accidents and injuries that occur to seamen in the service of a vessel.

The SLA gave power to the states for control over natural resources for up to three miles off the coastline and up to nine miles in Texas and Florida. The SLA was passed due to the increased interest in exploring the sea beds off the U.S. coasts for natural resources including oil and gas. Beyond the 3-mile or 9-mile state cut-off, the U.S. Does the Outer Continental Shelf Lands Act (OCSLA) Cover Onshore Injuries?

The Outer Continental Shelf Lands Act (OCSLA) was passed in 1953 to extend protections afforded under the Jones Act and the Longshore and Harbor Worker’s Compensation Act (LHWCA). It extended admiralty jurisdiction off the coast beyond states’ jurisdiction in United States’ waters. Workers’ Compensation Review: What Are the Oilfield Anti-Indemnity Acts? What You Need to Know About Maritime Defense Contractor Injuries Compensation. There are specific types of workers’ compensation programs for defense contractors in the service of a government vessel, military vessels, military bases, or other such government and military operations.

These protections provide coverage in the event of an on-the-job accident resulting in injury or illness within United-States-controlled waters, onshore, and overseas in U.S. -occupied foreign countries, harbors, and military bases. What Workers Need to Know About Offshore Drilling. How Autonomous Shipping Is Affecting the Maritime Industry. What Is the Cabotage Provision of the Jones Act? Maritime Piracy and Foreign Policy. When we hear the word “pirate,” we tend to picture things like gruff seafarers searching for treasure or anonymous hacker types illegally downloading movies and software. What many people don’t realize, however, is that piracy isn’t just the stuff of Hollywood films and tech industry slang—maritime pirates are very real and continue to cause problems today for international businesses and foreign policy. What Is Maritime Piracy? Who Is Covered Under the Admiralty Extension Act? What Is the Difference Between the LHWCA and the Jones Act?

Workplace injury among employees in the maritime industry is covered by more than one type of law. How Risky Is It to Work on an Offshore Oil Rig? Offshore Accidents: What Caused the Deepwater Horizon Oil Spill? What Caused the Deepwater Horizon Oil Spill? How Does Maritime Law Enforcement Work in International Waters? Maritime law enforcement and the laws of the seas are regulated by a number of different countries. In addition, there are several international agreements for extending laws to international waters. International waters—or the high seas—make up a large portion of the waters found on earth. While some people might believe they are free from any laws when on the high seas, they are not. Reasons Why Maritime Workers Decide to Leave Their Jobs. The Benefits and Risks of Working in the Maritime Industry.

Navigating the Suits in Admiralty Act (SAA) What Is the Admiralty Extension Act (AEA)? How the OCSLA Affects Oil Rig Workers. Interesting Facts About Oil Spills in the Ocean and Explosions. Overview of Maritime Law Employment Legislation. Know Your Rights: FAQs About the Jones Act. 4 Steps to Filing a Maintenance and Cure Claim.

Most Common Maritime Injuries in the U.S. What Are My Rights as a Seaman?