14 Things You Should Understand About Guns Before Writing About Them. Guns can be dangerous in the wrong hands. 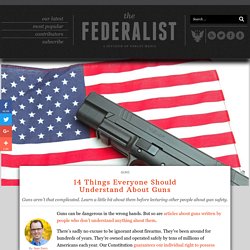 But so are articles about guns written by people who don’t understand anything about them. There’s sadly no excuse to be ignorant about firearms. They’ve been around for hundreds of years. They’re owned and operated safely by tens of millions of Americans each year. Our Constitution guarantees our individual right to possess guns so that we might be able to defend ourselves from those who would violently take away our freedom. Here’s a good example of the kind of self-inflicted injury that can result from weaponizing an ill-informed opinion about guns and gun-related paraphernalia, courtesy of Ryan J. I believe these are rubber bullets, can anyone confirm? Unfortunately, Reilly is hardly alone in his complete ignorance of how guns work. 1) Don’t Lecture Anyone On Gun Safety Until You Understand The Basic Rules 1. Each rule is effectively a backup in case you ignore a previous rule. 2) Guns Are Inanimate Objects 6) Gun Safeties Can And Will Fail.

7 Gun Control Myths That Just Won't Die. After every shooting, politicians and activists rush to the cameras or their keyboards to tell people exactly what should be done to stop mass shootings in the future. 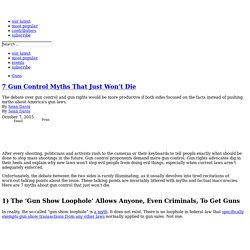 Here are 7 myths about gun control that just won’t die. 1) The ‘Gun Show Loophole’ Allows Anyone, Even Criminals, To Get Guns In reality, the so-called “gun show loophole” is a myth. What does exist, however, is a federal exemption for sales between two private, non-FFL residents of the same state, regardless of whether that transaction happens at a gun show or not. ACT. IOWA CITY, Iowa—The number and percentage of high school graduates interested in becoming an educator have significantly declined over the past four years, according to The Condition of Future Educators, a new report from ACT. 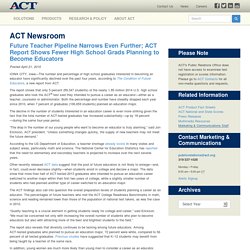 The report shows that only 5 percent (89,347 students) of the nearly 1.85 million 2014 U.S. high school graduates who took the ACT® test said they intended to pursue a career as an educator—either as a teacher, counselor or administrator. Both the percentage and number have steadily dropped each year since 2010, when 7 percent of graduates (106,659 students) planned an education major. The decline in the number of students interested in an education career is even more striking given the fact that the total number of ACT-tested graduates has increased substantially—up by 18 percent—during the same four-year period. “The drop in the number of our young people who want to become an educator is truly alarming,” said Jon Erickson, ACT president. How to Humanize Your Online Class - 2. 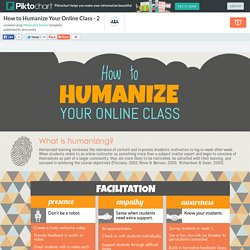 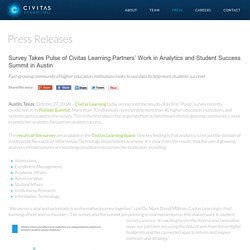 More than 70 individuals representing more than 40 higher education institutions and systems participated in the survey. This is the first step in the ongoing effort to benchmark the burgeoning community’s work in predictive analytics focused on student success. The results of the survey are available in the Civitas Learning Space. One key finding is that analytics is not just the domain of Institutional Research or Information Technology departments anymore. Admissions Enrollment Management Academic Affairs Administration Student Affairs Institutional Research Information Technology “We are on a vital and potentially transformative journey together,” said Dr. “Using predictive analytics is clearly the shape of things to come,” said Dr.