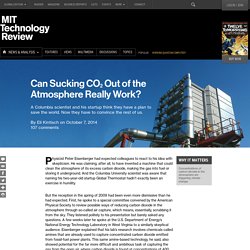 He was claiming, after all, to have invented a machine that could clean the atmosphere of its excess carbon dioxide, making the gas into fuel or storing it underground. And the Columbia University scientist was aware that naming his two-year-old startup Global Thermostat hadn’t exactly been an exercise in humility. But the reception in the spring of 2009 had been even more dismissive than he had expected. First, he spoke to a special committee convened by the American Physical Society to review possible ways of reducing carbon dioxide in the atmosphere through so-called air capture, which means, essentially, scrubbing it from the sky. They listened politely to his presentation but barely asked any questions.

The next day, however, a manager from the lab called him excitedly. The need for a carbon-sucking machine is easy to see. Most experts are skeptical. Warming up The upshot? Suck it up False hope. Fossil Fuels - IER. Fossil fuels—coal, petroleum oil, and natural gas — are concentrated organic compounds found in the Earth’s crust. 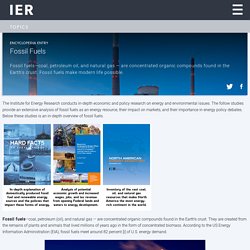 Fossil fuels make modern life possible. The Institute for Energy Research conducts in-depth economic and policy research on energy and environmental issues. The follow studies provide an extensive analysis of fossil fuels as an energy resource, their impact on markets, and their importance in energy policy debates. Below these studies is an in-depth overview of fossil fuels. Fossil fuels—coal, petroleum (oil), and natural gas — are concentrated organic compounds found in the Earth’s crust.

Fossil fuels make modern life possible. Scattered records of the use of coal date to at least 1100 BC. Coal was the first of the fossil fuels to go into widespread use, displacing low-energy firewood as the leading source of fuel in the US, and triggering the country’s industrialization in the second half of the 19th century. Fossil Fuels Today: Oil, By the Barrel. Imrs.php (JPEG Image, 1484 × 956 pixels) - Scaled (69%) Factorysmoke.jpg (JPEG Image, 1000 × 709 pixels) Can the world economy survive without fossil fuels?

The final chapters of The Bone Clocks, David Mitchell’s 2014 novel, describe a future in which progress has gone into reverse. 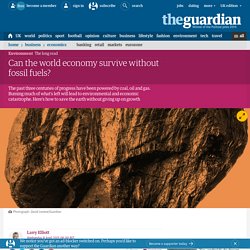 In 2043, the fossil fuel age is over: nuclear power stations ar e melting down, there is no access to the electricity grid and solar panels are so prized that they are looted. Catastrophic climate change has become a reality. Rising sea levels have caused floods on the New York City subway, killing thousands. Internet coverage is patchy, food and consumer goods are scarce, and life‑saving drugs such as insulin are hard to come by. It is a dystopian vision that looks like a brutal, dangerous version of the past – one not at all like the future that was promised when the cold war ended with victory for the western capitalist model.

Here is one such warning: “For generations, we have assumed that the efforts of mankind would leave the fundamental equilibrium of the world’s systems and atmosphere stable. How Much Fossil Fuel is in the Earth? Earth contains a finite supply of fossil fuels –- the big three being oil, coal and natural gas. 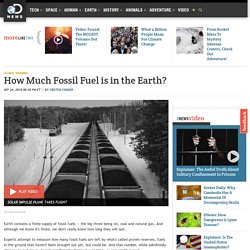 And although we know it's finite, we don't really know how long they will last. Experts attempt to measure how many fossil fuels are left by what's called proven reserves, fuels in the ground that haven't been brought out yet, but could be. And that number, while admittedly slippery to nail down, hasn’t significantly declined over time, as one might expect. According to the 2010 International Energy Outlook, “as of Jan. 1, 2010, proved world oil reserves, as reported by the Oil & Gas Journal, were estimated at 1,354 billion barrels—12 billion barrels (about 1 percent) higher than the estimate for 2009.”

Wait: How could this happen? The trick here is the term "proved (or proven) reserves. " Plenty of deposits around the world aren't accessible, or simply wouldn't be profitable to drill or mine. What is U.S. electricity generation by energy source? - FAQ. In 2014, the United States generated about 4,093 billion kilowatthours of electricity.1 About 67% of the electricity generated was from fossil fuels (coal, natural gas, and petroleum). 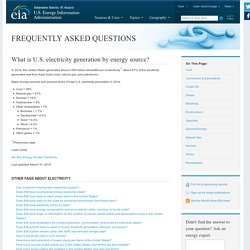