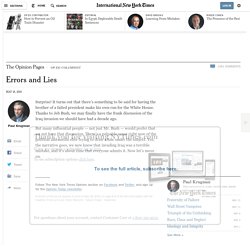 It turns out that there’s something to be said for having the brother of a failed president make his own run for the White House. Thanks to Jeb Bush, we may finally have the frank discussion of the Iraq invasion we should have had a decade ago. Crowding In and the Paradox of Thrift. As Francesco Saraceno notes, the IMF’s research department, which was always excellent, has become an extraordinary source of information and ideas in this Age of Blanchard. 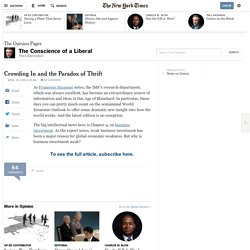 In particular, these days you can pretty much count on the semiannual World Economic Outlook to offer some dramatic new insight into how the world works. And the latest edition is no exception. The big intellectual news here is Chapter 4, on business investment. As the report notes, weak business investment has been a major reason for global economic weakness. 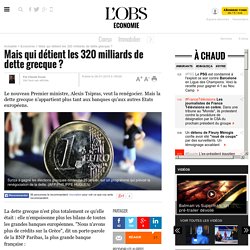 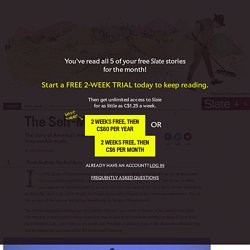 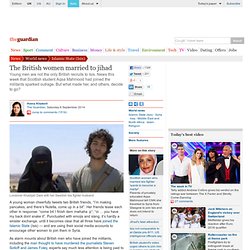 Her friends tease each other in response: “come b4 I finish dem mwhaha :p”; “oi … you have my back dont snake it”. Punctuated with emojis and slang, it’s hardly a sinister exchange, until it becomes clear that all three have joined the Islamic State (Isis) — and are using their social media accounts to encourage other women to join them in Syria. As alarm mounts about British men who have joined the militants, including the man thought to have murdered the journalists Steven Sotloff and James Foley, experts say much less attention is being paid to an explicit recruitment drive by Islamic State members at the behest of their leader, Abu Bakr al-Baghdadi, to lure women and girls to the cause. There's poverty in the UK, but we are better off calling it inequality.

We all think we know what we're talking about when we discuss poverty. 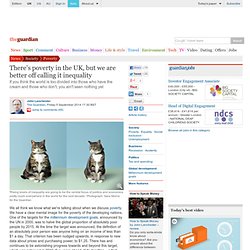 We have a clear mental image for the poverty of the developing nations. One of the targets for the millennium development goals, announced by the UN in 2000, was to halve the global proportion of absolutely poor people by 2015. Occupy Wall Street activists buy $15m of Americans' personal debt. A group of Occupy Wall Street activists has bought almost $15m of Americans' personal debt over the last year as part of the Rolling Jubilee project to help people pay off their outstanding credit. 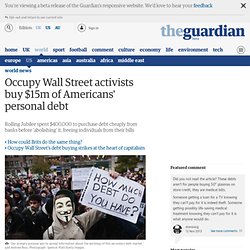 Rolling Jubilee, set up by Occupy's Strike Debt group following the street protests that swept the world in 2011, launched on 15 November 2012. The group purchases personal debt cheaply from banks before "abolishing" it, freeing individuals from their bills. By purchasing the debt at knockdown prices the group has managed to free $14,734,569.87 of personal debt, mainly medical debt, spending only $400,000. "We thought that the ratio would be about 20 to 1," said Andrew Ross, a member of Strike Debt and professor of social and cultural analysis at New York University. He said the team initially envisaged raising $50,000, which would have enabled it to buy $1m in debt. No wonder people aren't paying back their student loans.

Student protest banner challenging the government's decision to sell off their debts. 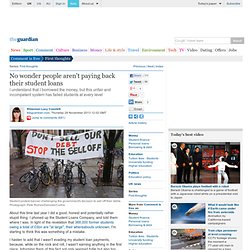 Photograph: Pete Riches/Demotix/Corbis About this time last year I did a good, honest and potentially rather stupid thing: I phoned up the Student Loans Company, and told them where I was. In light of the revelation that 368,000 former students owing a total of £5bn are "at large", their whereabouts unknown, I'm starting to think this was something of a mistake. I hasten to add that I wasn't evading my student loan payments, because, while on the rock and roll, I wasn't earning anything in the first place. Intern Xuedan Wang sues Harper’s Bazaar: Why don’t more unpaid interns protest? Hemera/Thinkstock. 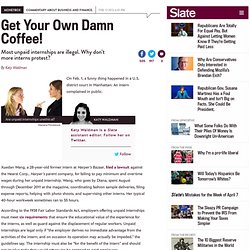 On Feb. 1, a funny thing happened in a U.S. district court in Manhattan: An intern complained in public. Katy Waldman is a Slate assistant editor. Follow her on Twitter. Follow. This obsession with outsourcing public services has created a shadow state. The government has "finally woken up from its post-election slumber", notes Caroline de la Soujeole, from investment bank Seymour Pierce, "and is open for business … determined to find new, efficient ways of delivering services rather than cutting them". 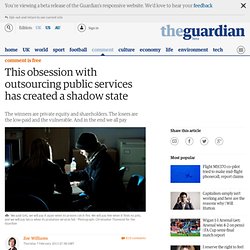 Huh. Who ever heard of a government that could cause this much damage while still asleep? "La Bourse va trop vite, un krach risque d'arriver" It’s time to bring ‘dark pools’ into the daylight. Nanex ~ Order Routing Animation ~ 02-May-2013 ~ JNJ. BNP Paribas Investment Partners temporaly suspends the calculation of the Net Asset Value of the following funds : Parvest Dynamic ABS, BNP Paribas ABS EURIBOR and BNP Paribas ABS EONIA. The complete evaporation of liquidity in certain market segments of the US securitisation market has made it impossible to value certain assets fairly regardless of their quality or credit rating. The situation is such that it is no longer possible to value fairly the underlying US ABS assets in the three above-mentioned funds. Who To Listen To. The War on Common Sense Continues - Tim Duy's Fed Watch. This weekend, European policymakers opened up a new front in their ongoing war on common sense. The details of the Cyprus bailout included a bail-in of bank depositors, small and large alike.

As should have been expected, chaos ensued as Cypriots rushed to ATMs in a desperate attempt to withdraw their savings, the initial stages of what is likely to become a run on the nation's banks. Shocking, I know. Which (macro)-economists are worth listening to? Angela Merkel’s mania for austerity is destroying Europe. Which world leader poses the biggest threat to global order and prosperity? The Iranian president, Mahmoud Ahmadinejad? Wrong. Israel’s prime minister, Binyamin Netanyahu? Nope. « Si on retournait à des monnaies nationales... » Ein BILD-Brief aus Sorge um Europa: Liebe Griechen, macht jetzt keinen Fehler - Politik Ausland.

Griechenland wählt. Europa zittert. The bankers who broke the world. Photo by Ralph Orlowski/Getty Images. I've come to believe that the best book about the global recession of 2008-present is Liaqart Ahamed's Lords of Finance,: The Bankers Who Broke the World, a history of central banking in the interwar period. The mistakes being made today are not "the same" as the mistakes of the central bankers of the 1930s but the basic plot is the same. This morning the Bank of England team up with the European Central Bank to issue a steady-as-she-goes policy statement, just as the Federal Reserve did yesterday. Europe’s Plan Won’t Cut Greek Debt: Allen, Eichengreen and Evans. Postmortems of last month’s European Union summit meeting have now turned to why the Greek debt rescue failed to restore investor confidence in the country’s finances.

Many reasons are advanced: the failure to communicate clearly; the complexity of the plan; the inability to coordinate with the International Monetary Fund. There’s a simpler explanation: The debt-reduction deal failed because it didn’t reduce the debt. Instead, Greece gets a reduction in interest rates and a lengthening of maturities on its loan from the European Financial Stability Facility. But that loan also has been supersized, and the country has to pay back the additional official debt. The government in Athens also gets a 20 billion-euro ($28.7 billion) bond-buyback program funded by the EFSF.