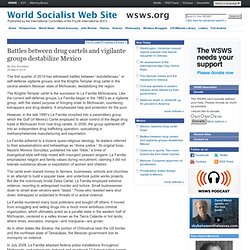 The Knights Templar cartel is the successor to La Familia Michoacana. Like the current self-defense groups, La Familia began in the 1980’s as a vigilante group, with the stated purpose of bringing order to Michoacán, countering kidnappers and drug dealers. It emphasized help and protection for the poor. However, in the late 1990’s La Familia morphed into a paramilitary group which the Gulf (of Mexico) Cartel employed to seize control of the illegal drug trade in Michoacán from rival drug cartels. La Familia adhered to a bizarre quasi-religious ideology. The cartel even loaned money to farmers, businesses, schools and churches in an attempt to build a popular base, and undertook public works projects. Soldiers re-occupy Mexico’s Hot Land. Six years later, the Mexican government and its U.S. advisers have all but wiped out La Familia. But as federal forces receded, an equally powerful cartel, the Knights Templar, took its place, squeezing extortion payments from entire towns, torching businesses and killing anyone who challenged its rule.

Local farmers and shopkeepers have increasingly banded together to form armed “self-defense” groups, chasing off corrupt cops and setting up checkpoints along the highways to sniff out traffickers. But their appearance in more and more towns — and the spectacle of masked, ragged irregulars parading around on national television with weapons — has presented a growing challenge to the Peña Nieto government, sensitive to the perception that the Mexican state is teetering in parts of the country. The self-defense groups have also brought the wrath of the gangsters, who have shot up their towns and laid siege by cutting off shipments of gasoline, food and other supplies.

Michoacan self-defense groups celebrate 1st anniversary. The self-defense groups were established by local farmers and ranchers and emerged when it became clear the Mexican government was incapable of attacking the drug traffickers and their increasingly violent criminal activity. 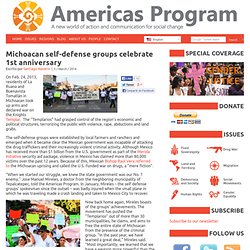 Although Mexico has received more than $1 billion from the U.S. government as part of the Merida Initiative security aid package, violence in Mexico has claimed more than 80,000 victims over the past 12 years. Because of this, Mexican Bishop Raul Vera referred to the Michoacan uprising and called the U.S. -funded war on drugs, a “mere fiction”. “When we started our struggle, we knew the state government was our No. 1 enemy,” Jose Manuel Mireles, a doctor from the nieghboring municipality of Tepalcatepec, told the Americas Program. In January, Mireles – the self defense groups’ spokesman since the outset – was badly injured when the small plane in which he was traveling made a crash landing and taken to Mexico City to recover.

How 'Mexico's Moment' Became 'Mexico's Murder'  An aloof President Obama angered many when he was caught playing golf moments after addressing the beheading of journalist James Foley at a press conference. 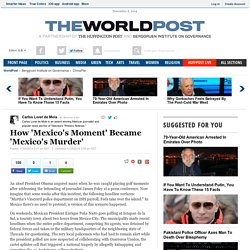 Now imagine that some weeks after this incident, the following headline surfaces: "Martha's Vineyard police department on ISIS payroll, Feds take over the island. " In Mexico there's no need to pretend; a version of this scenario happened. On weekends, Mexican President Enrique Peña Nieto goes golfing at Ixtapan de la Sal, a touristy town about two hours from Mexico City.

The municipality made recent headlines when the entire police department, comprising 80 agents, was detained by federal forces and taken to the military headquarters of the neighboring state of Tlaxcala for questioning. Mexican Vigilantes Beat Back Ruthless Knights Templar Cartel. Trasladan a Rodrigo Vallejo a PGR para rendir declaración. 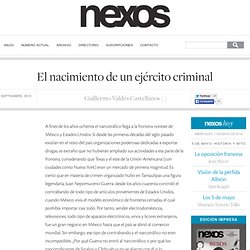 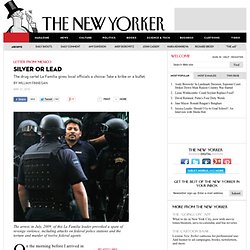 It was what people call corpse messaging. Usually it involves a mutilated body—or a pile of bodies, or just a head—and a handwritten sign. “Talked too much.” “So that they learn to respect.” “You get what you deserve.”