Potions - Pottermore. It is often asked whether a Muggle could create a magic potion, given a Potions book and the right ingredients. 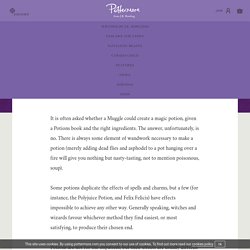 The answer, unfortunately, is no. There is always some element of wandwork necessary to make a potion (merely adding dead flies and asphodel to a pot hanging over a fire will give you nothing but nasty-tasting, not to mention poisonous, soup). Pensieve - Pottermore. A Pensieve is a wide and shallow dish made of metal or stone, often elaborately decorated or inlaid with precious stones, and carrying powerful and complex enchantments. 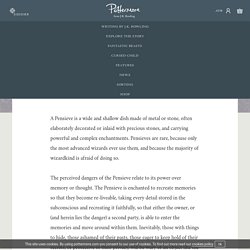 Pensieves are rare, because only the most advanced wizards ever use them, and because the majority of wizardkind is afraid of doing so. The perceived dangers of the Pensieve relate to its power over memory or thought. The Pensieve is enchanted to recreate memories so that they become re-liveable, taking every detail stored in the subconscious and recreating it faithfully, so that either the owner, or (and herein lies the danger) a second party, is able to enter the memories and move around within them. Inevitably, those with things to hide, those ashamed of their pasts, those eager to keep hold of their secrets, or protective of their privacy, will be wary of an object like the Pensieve.

The Great Lake - Pottermore. The grounds of Hogwarts function partly as a nature reserve for magical creatures which have difficulty existing in Muggle-inhabited areas. 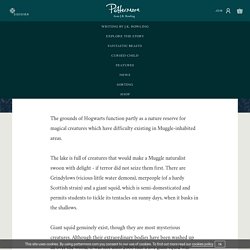 The lake is full of creatures that would make a Muggle naturalist swoon with delight - if terror did not seize them first. There are Grindylows (vicious little water demons), merpeople (of a hardy Scottish strain) and a giant squid, which is semi-domesticated and permits students to tickle its tentacles on sunny days, when it basks in the shallows. Giant squid genuinely exist, though they are most mysterious creatures. Cokeworth - Pottermore. Cokeworth is a fictional town in the English Midlands where Harry spends a night at the Railview Hotel with his aunt, uncle and cousin Dudley. 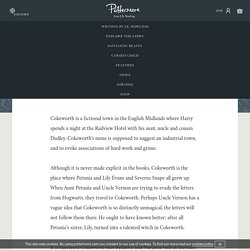 Cokeworth's name is supposed to suggest an industrial town, and to evoke associations of hard work and grime. Although it is never made explicit in the books, Cokeworth is the place where Petunia and Lily Evans and Severus Snape all grew up. When Aunt Petunia and Uncle Vernon are trying to evade the letters from Hogwarts, they travel to Cokeworth. Perhaps Uncle Vernon has a vague idea that Cokeworth is so distinctly unmagical, the letters will not follow them there. Chamber of Secrets - Pottermore. The subterranean Chamber of Secrets was created by Salazar Slytherin without the knowledge of his three fellow founders of Hogwarts. 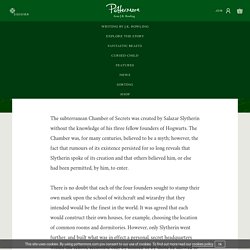 The Chamber was, for many centuries, believed to be a myth; however, the fact that rumours of its existence persisted for so long reveals that Slytherin spoke of its creation and that others believed him, or else had been permitted, by him, to enter. There is no doubt that each of the four founders sought to stamp their own mark upon the school of witchcraft and wizardry that they intended would be the finest in the world.

It was agreed that each would construct their own houses, for example, choosing the location of common rooms and dormitories. However, only Slytherin went further, and built what was in effect a personal, secret headquarters within the school, accessible only by himself or by those he allowed to enter. The existence of the Chamber was known to Slytherin’s descendants and those with whom they chose to share the information. Platform Nine and Three-Quarters - Pottermore. J.K. 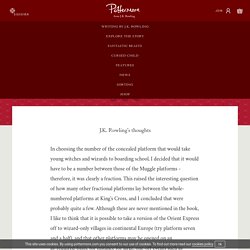 Rowling’s thoughts In choosing the number of the concealed platform that would take young witches and wizards to boarding school, I decided that it would have to be a number between those of the Muggle platforms - therefore, it was clearly a fraction. This raised the interesting question of how many other fractional platforms lay between the whole-numbered platforms at King's Cross, and I concluded that were probably quite a few. The Leaky Cauldron - Pottermore. Some people argue that the oldest pub in London is the White Hart on Drury Lane; others that it is the Angel on Bermondsey Wall, or the Lamb and Flag on Rose Street. 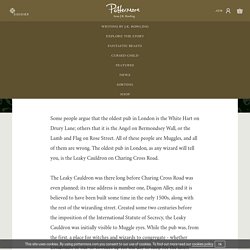 All of these people are Muggles, and all of them are wrong. The oldest pub in London, as any wizard will tell you, is the Leaky Cauldron on Charing Cross Road. Hufflepuff Common Room - Pottermore. The Hufflepuff common room is entered from the same corridor as the Hogwarts kitchens. 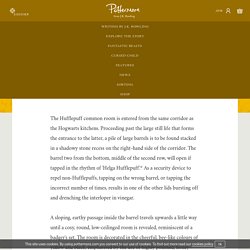 Proceeding past the large still life that forms the entrance to the latter, a pile of large barrels is to be found stacked in a shadowy stone recess on the right-hand side of the corridor. The barrel two from the bottom, middle of the second row, will open if tapped in the rhythm of 'Helga Hufflepuff'.* As a security device to repel non-Hufflepuffs, tapping on the wrong barrel, or tapping the incorrect number of times, results in one of the other lids bursting off and drenching the interloper in vinegar. King's Cross Station - Pottermore. When Ottaline Gambol commandeered a Muggle train to serve as the new mode of transport for Hogwarts students, she also had constructed a small station in the wizarding village of Hogsmeade: a necessary adjunct to the train. 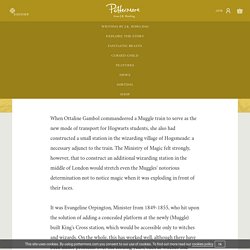 The Ministry of Magic felt strongly, however, that to construct an additional wizarding station in the middle of London would stretch even the Muggles' notorious determination not to notice magic when it was exploding in front of their faces. It was Evangeline Orpington, Minister from 1849-1855, who hit upon the solution of adding a concealed platform at the newly (Muggle) built King's Cross station, which would be accessible only to witches and wizards. On the whole, this has worked well, although there have been minor problems over the ensuing years, such as witches and wizards who have dropped suitcases full of biting spellbooks or newt spleens all over the polished station floor, or else disappeared through the solid barrier a little too loudly. J.K. Wizarding Schools - Pottermore. The great North American school of magic was founded in the seventeenth century. 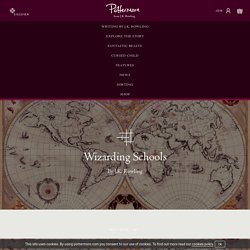 It stands at the highest peak of Mount Greylock, where it is concealed from non-magic gaze by a variety of powerful enchantments, which sometimes manifest in a wreath of misty cloud. Irish Beginnings Isolt Sayre was born around 1603 and spent her earliest childhood in the valley of Coomloughra, County Kerry, in Ireland. She was the offspring of two pure-blood wizarding families.

Secret Keeper - Pottermore. The Fidelius Charm is extremely ancient and still used to this day. It involves the concealment of information inside a living person. The chosen person, or Secret Keeper, is the only person who is thenceforth capable of revealing the protected information to others, however many previously knew it. If the Secret Keeper shares the hidden information, the person to whom he or she has confided it will be bound by the Fidelius Charm and find it impossible to pass the information on. The Fidelius Charm is not without its weaknesses. The Floo Network - Pottermore. In use for centuries, the Floo Network, while somewhat uncomfortable, has many advantages. Firstly, unlike broomsticks, the Network can be used without fear of breaking the International Statute of Secrecy. Secondly, unlike Apparition, there is little to no danger of serious injury. Ministers for Magic - Pottermore. The Ministry of Magic was formally established in 1707 with the appointment of the very first man to hold the title 'Minister for Magic', Ulick Gamp.* The Minister for Magic is democratically elected, although there have been times of crisis in which the post has simply been offered to an individual without a public vote (Albus Dumbledore was made such an offer, and turned it down repeatedly).

There is no fixed limit to a Minister's term of office, but he or she is obliged to hold regular elections at a maximum interval of seven years. Ministers for Magic tend to last much longer than Muggle ministers. Remus Lupin - Pottermore. Parents Remus Lupin was the only child of the wizard Lyall Lupin and his Muggle wife Hope Howell. Lyall Lupin was a very clever, rather shy young man who, by the time he was thirty, had become a world-renowned authority on Non-Human Spiritous Apparitions.

These include poltergeists, Boggarts and other strange creatures that, while sometimes ghostlike in appearance and behaviour, have never been truly alive and remain something of a mystery even to the wizarding world. On an investigative trip into a dense Welsh forest in which a particularly vicious Boggart was supposed to be lurking, Lyall ran across his future wife. Marge Dursley - Pottermore. Marjorie Eileen Dursley is the older sister of Vernon Dursley. Although no blood relation of Harry Potter, he has been taught to call her ‘Aunt Marge’.