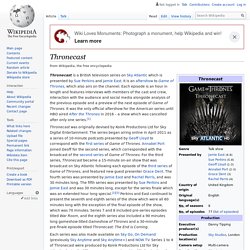 It is an aftershow to Game of Thrones, which also airs on the channel. Each episode is an hour in length and features interviews with members of the cast and crew, interaction with the audience and social media alongside analysis of the previous episode and a preview of the next episode of Game of Thrones. It was the only official aftershow for the American series until HBO aired After the Thrones in 2016 – a show which was cancelled after only one series.[1] Episodes[edit] Series overview[edit] Series 1 (2011)[edit] Series 2 (2012)[edit] Series 3 (2013)[edit] Series 4 (2014)[edit] Series 5 (2015)[edit] The series finale was an extended one-hour episode and was viewed by 560,000 viewers, making it the second highest-rated broadcast that week, behind the actual episode. Martian rover by Larkin_Michael. /alexwww/ardumower/particlefilter/particle_filter.html. DIY localization using radio frequency beacons. For a DIY localization system using radio frequency (RF) beacons, you’ll need: 3x or more RF sender (beacons) that broadcast some ID periodically1x RF receiver that receives ID and determines signal strength of received packet (RSSI) or time-of-flight (ToF) from all beacons, so you can finally use trilateration or a particle filter to estimate the receiver’s position Available standards: Ultra wideband (UWB) high accuracy (cm)measuring time-of-flight (ToF)IEEE802.15.4-2011 UWB (e.g. 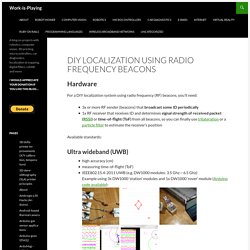 DW1000 modules: 3.5 Ghz ~ 6.5 Ghz) Example using 3x DW1000 ‘station’ modules and 1x DW1000 ‘rover’ module (Arduino code available): Bluetooth BLE (4.0) How to build sender and receiver Building the sender is easy (and can you find ready beam senders too)Building the receiver is not so easy, as you need to find a receiver chip that can tell you the RSSI of each received beam packet: Mini GPS Autonomous Car for Under $100. First off, if you haven’t watched episode #5 of The Tech Junkies, I’d have to insist you do that now: Okay, so let’s get onto the details. 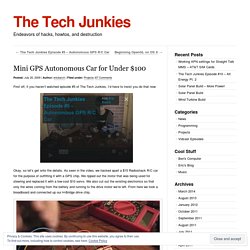 As seen in the video, we hacked apart a $15 Radioshack R/C car for the purpose of outfitting it with a GPS chip. We ripped out the motor that was being used for steering and replaced it with a low-cost $10 servo. We also cut out the existing electronics so that only the wires coming from the battery and running to the drive motor we’re left. From here we took a breadboard and connected up our H-Bridge drive chip. GPS Car H-Bridge The H-Bridge chip is given the job of providing current to the motor (whether it be forward or reverse) which takes its inputs from a microcontroller. Ogmacorp/OgmaDriveApp: Ogma - OgmaDriveApp. Harvitronix/reinforcement-learning-car: Using reinforcement learning to teach a car to avoid obstacles. 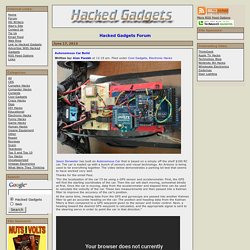 The car is loaded up with a bunch of sensors and visual technology. An Arduino is being used to tie everything together. The video below demonstrates a parking lot test that seems to have worked very well. Thanks for the email Paul. “For the localization of the car I’ll be using a GPS sensor and accelerometer. At the same time, heading data from the GPS and gyroscope are passed into another Kalman filter to get an accurate heading on the car. Source Code for “Self Driving Car Learns Online and On-board on Raspberry Pi 3” – Ogma Intelligent Systems Corp. 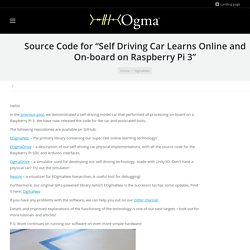 In the previous post, we demonstrated a self-driving model car that performed all processing on-board on a Raspberry Pi 3. We have now released the code for the car and associated tools. The following repositories are available on GitHub: EOgmaNeo – the primary library containing our super-fast online learning technology! EOgmaDrive – a description of our self-driving car physical implementations, with all the source code for the Raspberry Pi SDC and Arduino interfaces.

OgmaDrive – a simulator used for developing our self-driving technology, made with Unity3D. NeoVis – a visualizer for EOgmaNeo hierarchies. Furthermore, our original GPU-powered library (which EOgmaNeo is the successor to) has some updates. 40 Autonomous Mobile Robots on Wheels That You Can Build at Home. Semantic Segmentation — Popular Architectures. Solving Reinforcement Learning Classic Control Problems (OpenAIGym). Self-Driving Cars & Localization.