Grants for Horticulturists - Stanley Smith Horticultural Trust. Google. Venetia stanley smith. Hippies In India find the young Guru Maharaj Ji (Prem Rawat) From the late 1960's onwards many young Western "hippies" travelled to India searching for a guru that could impart wisdom and enlightenment. This trek, which in hindsight appears to have been a nearly total failure, was an opening for the young Prem Rawat. A few of these "sincere seekers" arrived to check out the young Guru Maharaj Ji (now known as Maharaji or Prem Rawat) though only very few of these stayed to worship at his feet. Prem Rawat, was then and is now, seriously "uncool".

He was very short, pudgy to grossly obese, jowly and sweaty and spoke in squeaky platitudes based on his fascination with Western technology rather than Eastern mysticism and was unable to maintain even a pretense of asceticism or "god-consciousness". He thought James Last was the cool and groovy "now music. " (left) The western pilgrims at Prem Nagar ashram: Peter Lee is on the far right in a blanket. Dr. It was hard and I was always thinking about going off into the mountains and meditating. Venetia Stanley-Smith in Ohara, Kyoto. 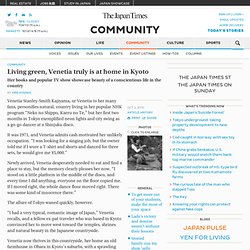 It was 1971, and Venetia admits cash motivated her unlikely occupation. “I was looking for a singing job, but the owner told me if I wore a T-shirt and shorts and danced for three sets, he would give me ¥5,000.” Newly arrived, Venetia desperately needed to eat and find a place to stay, but the memory clearly pleases her now. “I stood on a little platform in the middle of the disco, and every time I did anything, everyone on the floor copied me. 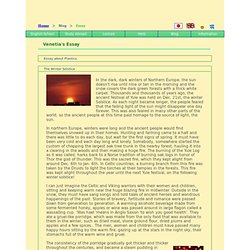 In our daily life, we rarely have much time to show how much we love our partner, children, parents or friends. Perhaps we are busy, watching television, playing computer games, answering emails or surfing on the net. We forget that sometimes the people we love, even those under the same roof, could be lonely; they need us at as much if not more than everyone else in cyberspace! So, maybe, Valentine's Day is a good chance to just sit down, and really talk and listen to each other. Just who was the man who became Saint Valentine, the Patron Saint of Lovers? One Valentine was a Christian priest in Rome during the reign of Emperor Claudius II. Another story has it that Valentine sent the first 'valentine' greeting himself. 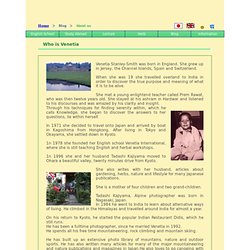 She grew up in Jersey, the Channel Islands, Spain and Switzerland. When she was 19 she travelled overland to India in order to discover the true purpose and meaning of what it is to be alive. She met a young enlightend teacher called Prem Rawat, who was then twelve years old. She stayed at his ashram in Hardwar and listened to his discourses and was amazed by his clarity and insight. Through his techniques for finding serenity within, which he calls Knowledge, she began to discover the answers to her questions, lie within herself.

In 1971 she decided to travel onto Japan and arrived by boat in Kagoshima from Hongkong. 1n 1978 she founded her English school Venetia International, where she is still teaching English and herbal workshops. 1n 1996 she and her husband Tadashi Kajiyama moved to Ohara a beautiful valley, twenty minutes drive from Kyoto. She is a mother of four children and two grand-children. Venetia International : Venetia's blog. “When love is deep, much can be accomplished.” 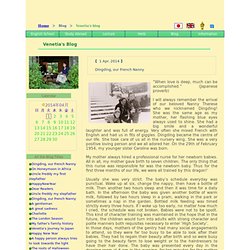 (Japanese proverb) I will always remember the arrival of our beloved Nanny Therese who we nicknamed Dingding! She was the same age as my mother, her flashing blue eyes always used to shine. She had a big smile and a wonderful laughter and was full of energy. Very often she mixed French with English and had us in fits of giggles. My mother always hired a professional nurse for her newborn babies. Usually she was very strict.