Econyl – Recycling and further! We regenerate NYLON waste into yarn for brand new products. It is the ECONYL® brand. 100% regeneration, 100% performance. What is Econyl Fabric: Properties, How its Made and Where. ADIFF - Design of the World. Design of the World is curated by Josephmark – a digital product studio that believes in the world-changing power of a great idea. 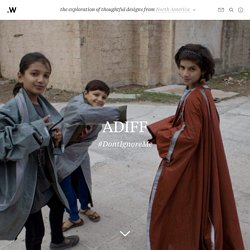 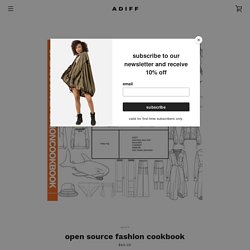 With detailed “recipes,” including step-by-step illustrations from six contemporary fashion brands, the Cookbook empowers you to make your own clothing from items that are readily available in your home. We understand that not everyone is a trained sewer, so we included recipes that vary in difficulty, from no-sew easy basics to more advanced designs. Not only does the Cookbook serve as an instructional handbook, but it also includes essays from industry leaders who paint a clearer picture of sustainable fashion and what can be done, both as an industry and as consumers, in order to improve our world.

Open Source Fashion Cookbook Is Sharing “Recipes” for Upcycling at Home, With Patterns by Raeburn, Chromat, and More. You can spend almost a decade writing about fashion, and your laptop will still autocorrect lookbook to cookbook. 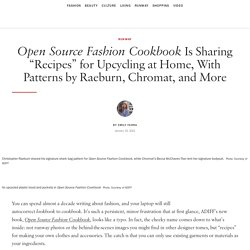 It’s such a persistent, minor frustration that at first glance, ADIFF’s new book, Open Source Fashion Cookbook, looks like a typo. In fact, the cheeky name comes down to what’s inside: not runway photos or the behind-the-scenes images you might find in other designer tomes, but “recipes” for making your own clothes and accessories. How Louis Vuitton & Takashi Murakami's Monogram Bags Became A 2000s-Era "It" Bag. Louis Vuitton has long held an unwavering cult following for its luxury accessories. 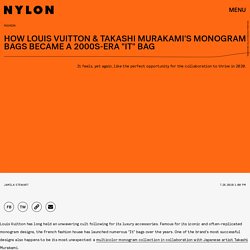 Famous for its iconic and often-replicated monogram designs, the French fashion house has launched numerous "It" bags over the years. One of the brand's most successful designs also happens to be its most unexpected: a multicolor monogram collection in collaboration with Japanese artist Takashi Murakami. Absent of its signature brown (or less often, black) background, Louis Vuitton's coveted logo bags were reimagined by Murakami in 2003 by having the famous monogram print covered in a rainbow of 33 different hues on either a white or black canvas.

Seen on the arms of Hollywood darlings and trendsetters throughout the early aughts, including Lil' Kim, Jessica Simpson, Nicole Richie, and Paris Hilton, the style become one of the most sought-after bags in fashion history. In 2003, Louis Vuitton was six years into the Marc Jacobs Era, an unofficial title that refers to the 16 years Jacobs spent at the helm. Louis Vuitton Introduces New Urs Fischer-Designed Monogram Print - Louis Vuitton x Urs Fischer Collaboration. The Louis Vuitton x Urs Fischer collection is a reworking of the brand’s signature flower motif and LV initials onto black and red, and black and white surfaces. 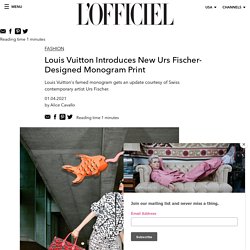 “Memory Sketches”—the name given to this novel pattern by Fischer—features on all products in the capsule and ranges in size, color, and application technique across this comprehensive partnership. The collection features the print across a range of leather goods, ready-to-wear, shoes, and accessories. Accessories. See Takashi Murakami's Trippy Cover Art for Kanye West and Kid Cudi's New Album. Takashi Murakami has created the album art for Kanye West’s new joint album with Kid Cudi, Kids See Ghosts. 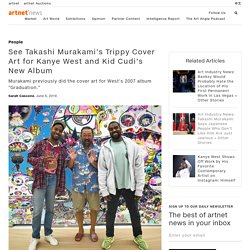 Cudi revealed the new art in an early morning Tweet. This is the second collaboration between West and Murakami, who previously designed the cover of West’s hit 2007 album Graduation. Takashi Murakami, Kids See Ghosts album art for Kanye West and Kid Cudi’s new group of the same name. Via @KidCudi on Twitter. The announcement, along with the release earlier this month of Ye, West’s eighth album, puts the spotlight back on the rapper’s music. His strange behavior sparked a conspiracy theory that West was actually creating an elaborate piece of performance art.

Rumors that Cudi was collaborating with West arose in July 2017, when they were seen together leaving a Los Angeles recording studio. West confirmed the project with a series of Tweets in April. Louis Vuitton to Discontinue Takashi Murakami “Multicolore” Monogram Collection. Louis Vuitton x Murakami Was The Defining Fashion Collaboration Of The Noughties. You might fondly remember the Louis Vuitton x Murakami Speedy bag as one of the handbag highlights of the early aughts. 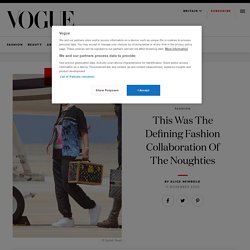 The artist Takashi Murakami’s take on the brand’s monogram canvas city holdall was the It-bag of choice for Paris Hilton, Lindsay Lohan and Jessica Simpson circa 2003. The latter celeb even took her rare Speedy on a camping trip to Yosemite in her MTV reality show, Newlyweds. Fast forward to 2020, and modern-day fashionistas who are obsessed with that era’s style – including Kendall Jenner and Bella Hadid – are the ones carrying Murakami’s splashy Speedy. Original Speedy fan Jessica Simpson in 2003. © KMazur The collaboration, which premiered on the spring/summer 2003 runway, was not limited to the compact bowling bags. The Louis Vuitton x Murakami campaign. © Mert Alas for Louis Vuitton The Louis Vuitton spring/summer 2003 show. © Pool BASSIGNAC/BENAINOUS Naomi Campbell and her Speedy at the 2003 Victoria's Secret show. © Jason Nevader.