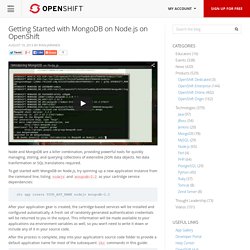 No data tranformation or SQL translations required. To get started with MongoDB on Node.js, try spinning up a new application instance from the command line, listing nodejs and mongodb-2.2 as your cartridge service dependencies: rhc app create YOUR_APP_NAME nodejs mongodb-2.2 After your application gear is created, the cartridge-based services will be installed and configured automatically. A fresh set of randomly-generated authentication credentials will be returned to you in the output. After the process is complete, step into your application’s source code folder to provide a default application name for most of the subsequent rhc commands in this guide: cd YOUR_APP_NAME For existing node-based OpenShift applications, MongoDB support can be easily added: Three Reasons Why Your Software Is So Far Behind Schedule. Implementing RESTFul Services with Node.js and MongoDB.

In my previous post, I shared a new version of the Employee Directory sample application. 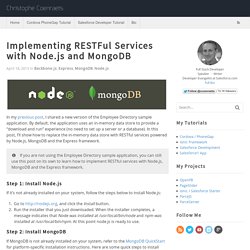 By default, the application uses an in-memory data store to provide a “download and run” experience (no need to set up a server or a database). In this post, I’ll show how to replace the in-memory data store with RESTful services powered by Node.js, MongoDB and the Express framework. If you are not using the Employee Directory sample application, you can still use this post on its own to learn how to implement RESTful services with Node.js, MongoDB and the Express framework.

Step 3: Download the Code. Sharding — MongoDB Manual 2.6.6. Sharding is the process of storing data records across multiple machines and is MongoDB’s approach to meeting the demands of data growth. 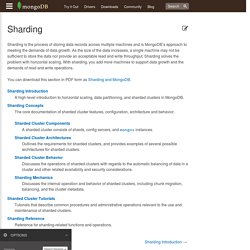 As the size of the data increases, a single machine may not be sufficient to store the data nor provide an acceptable read and write throughput. Cloud Hosting - Bitnami. CAP theorem. In theoretical computer science, the CAP theorem, also known as Brewer's theorem, states that it is impossible for a distributed computer system to simultaneously provide all three of the following guarantees:[1][2][3] In 2012 Brewer clarified some of his positions, including why the oft-used "two out of three" concept can be misleading or misapplied, and the different definition of consistency used in CAP relative to the one used in ACID.[4] History[edit] 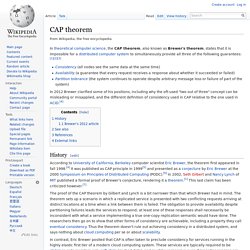 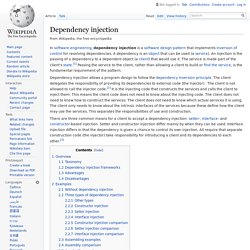 The client delegates the responsibility of providing its dependencies to external code (the injector) . Google Maps API Tutorial. It is now possible to obtain directions on your own map. 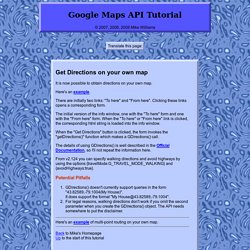 Here's an example. There are initially two links: "To here" and "From here". Clicking these links opens a corresponding form.   Google Maps JavaScript API   The KmlLayer renders KML and GeoRSS elements into a Maps API V3 tile overlay. 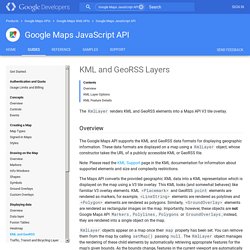 Overview The Google Maps API supports the KML and GeoRSS data formats for displaying geographic information. These data formats are displayed on a map using a KmlLayer object, whose constructor takes the URL of a publicly accessible KML or GeoRSS file. Note: Please read the KML Support page in the KML documentation for information about supported elements and size and complexity restrictions. The Maps API converts the provided geographic XML data into a KML representation which is displayed on the map using a V3 tile overlay. KmlLayer objects appear on a map once their map property has been set. Angular Google Maps. ObjectRocket - Features. The ObjectRocket Difference Fully managed platform DBAs with deep expertise in MongoDB and Redis manage your daily operations. 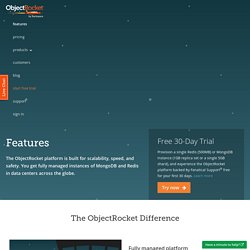 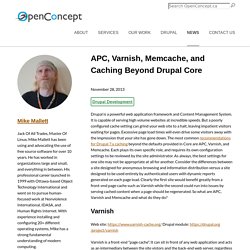 It is capable of serving high volume websites at incredible speeds. But a poorly configured cache setting can grind your web site to a halt, leaving impatient visitors waiting for pages. Excessive page load times will even drive some visitors away with the impression that your site has gone down. Svn - Why is Git better than Subversion? WebGL Lesson 1 – A triangle and a square. << Lesson 0Lesson 2 >> Welcome to my first WebGL tutorial! 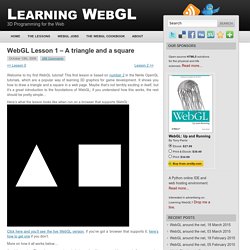 This first lesson is based on number 2 in the NeHe OpenGL tutorials, which are a popular way of learning 3D graphics for game development. It shows you how to draw a triangle and a square in a web page. Maybe that’s not terribly exciting in itself, but it’s a great introduction to the foundations of WebGL; if you understand how this works, the rest should be pretty simple… Here’s what the lesson looks like when run on a browser that supports WebGL:

Jenkins CI Integrates With Chef and Puppet to Provide Full Traceability of Deployments. Using the Deployment Notification plugin for Jenkins developed by CloudBees and either the additional Chef Software plugin or Puppet Labs plugin, engineers can now trace every file installed by Chef or Puppet within Jenkins CI. Jenkins will map each file installed by Chef or Puppet using its fingerprinting mechanism and show exactly to which environments that file has been deployed to. The plugin doesn't require Jenkins to run the external software but it offers a way for Chef or Puppet to deliver deployment reports via its API. The Deployment Notification plugin, the Chef Software plugin and the Puppet Labs plugin are the product of a cooperation between CloudBees, Chef Software and Puppet Labs. AngularJS. Flash Player crashes everytime Yosemite 10.10. Developers.

API Developer's Guide. How to use Stamplay Webhooks. We’ve just added a new feature and Stamplay now fully supports webhooks! Though they can be a little overwhelming at first they can be extremely powerful. The easiest way to think of webhooks is as notifications. When that event occurs, the source site makes an HTTP request to the URI configured for the webhook. Users can configure them to cause events on one site to invoke behaviour on another. The action taken may be anything. The two most common serialization formats that you will commonly see are: form-encoded or JSON. Shaping up with Angular.js. CoreOS Announces Competitor To Docker.