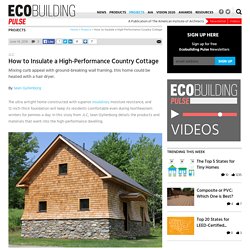 In this story from JLC, Sean Gyllenborg details the products and materials that went into the high-performance dwelling. Click here for larger image. Modern House Plans by Gregory La Vardera Architect: Swedish Platform Framing Info. The Swedish Platform Frame is the next evolutionary step in stud framing. 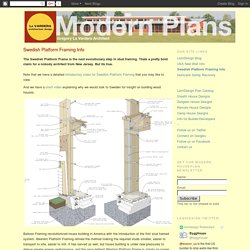 Thats a pretty bold claim for a nobody architect from New Jersey. But its true. Note that we have a detailed introductory video for Swedish Platform Framing that you may like to view. And we have a short video explaining why we would look to Sweden for insight on building wood houses. Balloon Framing revolutionized house building in America with the introduction of the first stud framed system. I make this bold sounding claim simply because it is not so bold. So rather than consider it a presumptuous claim to appoint the Swedish Platform Frame as our destiny in house building, rather I'd say it would be grandly presumptuous of us here in the US to believe that we have come up with something better in the few short years we've been trying.

Let's look at the details. Its time to look at the Swedish Platform Frame in detail. Lets start at the top of the foundation at the sill plate. What is PWYW? Thank you. Pre-Fab Passive House. Building and Raising Exterior Walls. In the previous two issues of JLC, I wrote articles covering the processes of snapping layout lines for exterior walls (“Layout Lines for Exterior Walls,” Apr/16) and of laying out the plates for exterior walls (“Layout for Exterior Wall Framing,” May/16). 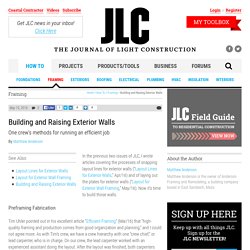 Now it’s time to build those walls. Preframing Fabrication Tim Uhler pointed out in his excellent article “Efficient Framing” (Mar/16) that “high-quality framing and production comes from good organization and planning,” and I could not agree more. As with Tim’s crew, we have a crew hierarchy with one “crew chief,” or lead carpenter, who is in charge. On our crew, the lead carpenter worked with an experienced assistant doing the layout. Every person on our crew has access to the plans, but instead of working directly from multiple sets of plans, we prefer to make a master list of all the parts that need to be built.

Typically, one person makes all the headers. Framing, Measuring and Layout Tools. In the previous issue of JLC, I wrote an article describing the process that our crew typically follows when snapping accurate layout lines for the exterior walls of a house (“Layout Lines for Exterior Walls,” Apr/16). 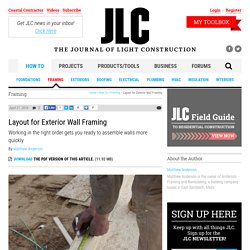 That procedure took two lead carpenters only about 30 minutes. While the rest of the crew continued to chip away at their prepared lists—cutting cripples, jacks, and studs and assembling headers, corners, and partition studs—the same two lead carpenters started on the next step: cutting and laying out the wall plates. Layout Lines for Exterior Walls. A couple of years ago, I wrote a two-part article on how my crew squares up a new foundation, sets mudsills, and installs the first-floor deck (“Mudsill Layout for a Complex Foundation,” May/14, and “Framing Over a Complex Foundation,” Jul/14). 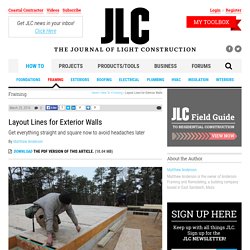 The next step is laying out for wall plates. Once we have put down floor sheathing and set the Lally columns, the crew sets up to build the first-floor walls. We make lists of all the framing “parts” we’ll need—headers, cripples, sills, studs, and jacks—and crew members begin cutting, labeling, and assembling those parts, as well as building corners and partition backers. While “the framing factory” jumps into action, two lead carpenters begin the process of laying out the walls on the first-floor deck. Establish a Baseline The house that we’ll use to explain the layout process has a fairly simple design, created by Patriot Builders, based in Harwich, Mass.