The Top 10 Best Microphones for DSLR Video Cameras. First and foremost, and although it really depends on which camera you have, most of the DSLR video cameras come with decent sound quality. 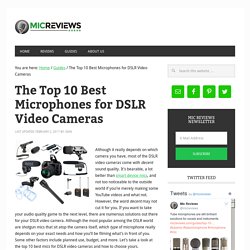 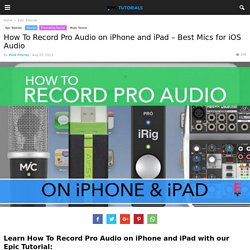 In the above video and this accompanying article we will show you how to record truly stunning audio that sounds so good, you will have a hard time convincing others that it was done using your iPhone or iPad. We also demo just a few of the best mics that are iOS compatible and allow you to capture great sounding audio such as the iRig Mic by IK Multimedia; the Rode Smartlav; the Apogee Mic and you will also learn how to record audio using a professional phantom powered microphone using an XLR connector by using the Behringer Q502USB powered mixing desk. Finally we show you how to import audio captured using an external field recorder like the Zoom H4N onto your iPhone or iPad without using a computer wirelessly by using the incredible Sandisk iXpand and how to sync of your audio in iMovie for iOS.

External Microphones for iPhone 5s, 5, 4S, iPad and iPod Touch Audio input. A few of the many microphone options to make your mobile recordings better. 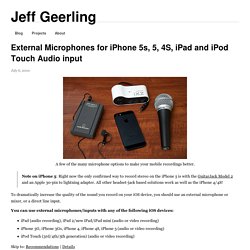 Note on iPhone 5: Right now the only confirmed way to record stereo on the iPhone 5 is with the GuitarJack Model 2 and an Apple 30-pin to lightning adapter. All other headset-jack based solutions work as well as the iPhone 4/4S! To dramatically increase the quality of the sound you record on your iOS device, you should use an external microphone or mixer, or a direct line input. 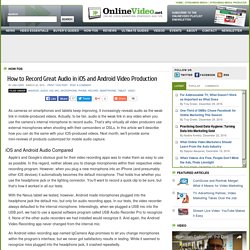 Actually, to be fair, audio is the weak link in any video when you use the camera’s internal microphone to record audio. That’s why virtually all video producers use external microphones when shooting with their camcorders or DSLs. In this article we’ll describe how you can do the same with your iOS-produced videos. Next month, we’ll provide some mini-reviews of products customized for mobile audio capture. [Fstoppers Review] The Best Portable Audio Recorder For DSLR Video. You often hear film makers say, "Your video is only as good as your audio". 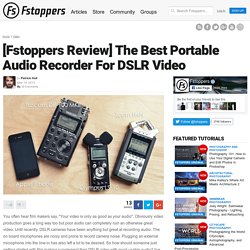 Obviously video production goes a long way too but poor audio can completely ruin an otherwise great video. Until recently, DSLR cameras have been anything but great at recording audio. Use a Lapel Mic and Your Smartphone to Record Audio for Video. Recording great video has never been easier. 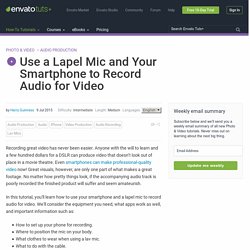 Anyone with the will to learn and a few hundred dollars for a DSLR can produce video that doesn’t look out of place in a movie theatre. Even smartphones can make professional-quality video now! Great visuals, however, are only one part of what makes a great footage. The Top 10 Best Microphones for DSLR Video Cameras. What Works for You? A Guide to DSLR Audio. If you gather ten sound engineers in a room and ask them what’s the best way to record something, don’t be surprised when you get ten different answers. 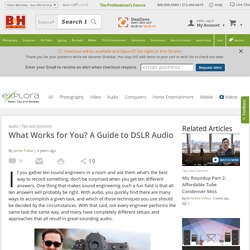 One thing that makes sound engineering such a fun field is that all ten answers will probably be right. With audio, you quickly find there are many ways to accomplish a given task, and which of those techniques you use should be decided by the circumstances. With that said, not every engineer performs the same task the same way, and many have completely different setups and approaches that all result in great-sounding audio. One field in which this is especially true is DSLR audio.