Q=Developing+a+Gang+Prevention+Program&ff1=eduPostsecondary+Education&ff2=dtyIn_2014&id=EJ1048780 Introduction: Sexual assault continues to be a pervasive health issue among college students in the USA. Prevention education initiatives have been ... ERIC - The Associations of Physical and Sexual Assault ... eric.ed.gov/? 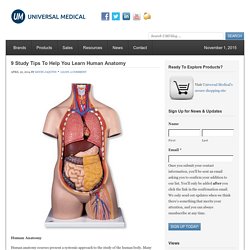 Many courses will begin with the introduction of anatomical terminology and an overview of the cellular processes and tissue classifications. Students learn about the gross and microscopic anatomy of the following systems: nervous system, musculoskeletal system, circulatory system, respiratory system, digestive system, integumentary system, urinary system, reproductive system, immune system, lymphatic system and the endocrine system. Human anatomy courses will generally offer a laboratory component that parallels and reinforces concepts through the use of anatomical models, histological slides, skeletal materials and cadaver demonstrations. 1. When learning a new subject it is important to keep up with the course material and develop a habit of reviewing your coursework on a daily basis. 2. Chancellor Dirks issues an update on sexual assault prevention, response.

UC Berkeley Chancellor Nicholas Dirks today (Tuesday, Feb. 25) issued this statement: Dear campus community, I want to begin this message with a clear, unequivocal statement: sexual assault has no place on a college campus or anywhere in civilized society, and I am fully committed to ensuring that we strengthen and expand our protocols in place, and roll out improvements in a deliberative way. 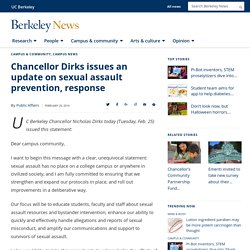 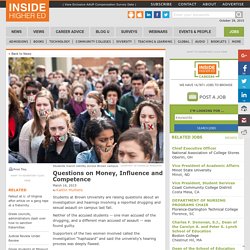 Neither of the accused students -- one man accused of the drugging, and a different man accused of assault -- was found guilty. Supporters of the two women involved called the investigation “haphazard” and said the university’s hearing process was deeply flawed. The student accused of drugging the women says he’s innocent. Students criticize Columbia's new sexual assault prevention efforts. Student groups advocating for changes in Columbia University’s approach to preventing sexual assault are again upset with the university’s attempts to address the issue, saying their concerns were largely ignored during the creation of a new "sexual respect" education program that will launch this week. 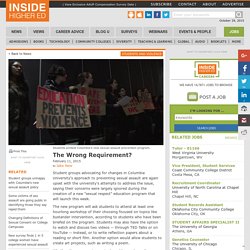 The new program will ask students to attend at least one hourlong workshop of their choosing focused on topics like bystander intervention, according to students who have been briefed on the program. Students may also have the option to watch and discuss two videos -- through TED Talks or on YouTube -- instead, or to write reflection papers about a reading or short film. Another option would allow students to create art projects, such as writing a poem. ﻿ Whether the program is required would vary depending on each college within the university. 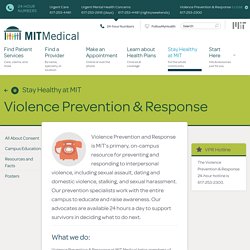 Our prevention specialists work with the entire campus to educate and raise awareness. Our advocates are available 24 hours a day to support survivors in deciding what to do next. What we do: Violence Prevention & Response at MIT Medical helps members of the MIT community prevent and respond to: Rape and Sexual Assault. Rape and Sexual Assault Dean G.

Kilpatrick, Ph.D. National Violence Against Women Prevention Research Center Medical University of South Carolina Rape is the most underreported crime in America. Significant changes to improve the treatment of sexual assault victims have occurred in the last two decades. During the 1970s, the first rape crisis center was established. Although the treatment of rape victims today is vastly different from three decades ago, many victims still do not receive the assistance and treatment they need. Statistical Overview Obtaining an accurate measurement of rape and other types of sexual assault is a challenge.

In 1997, there were 96,122 reported forcible rapes. An estimated 70 of every 100,000 females in the country were reported rape victims in 1997, a decrease 1% from 1996 13% from 1993. Ovw climate survey. 221153. Campus Sexual Assault: Suggested Policies and Procedures. The statement that follows was approved in October 2012 by the Association’s Committee on Women in the Academic Profession and its Subcommittee on Sexual Assault on Campus. 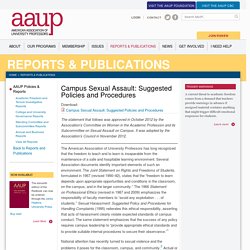 It was adopted by the Association’s Council in November 2012. The American Association of University Professors has long recognized that the freedom to teach and to learn is inseparable from the maintenance of a safe and hospitable learning environment. Several Association documents identify important elements of such an environment.