The History of The Price is Right

The Evolution of Game Shows. What's become of game shows in America? 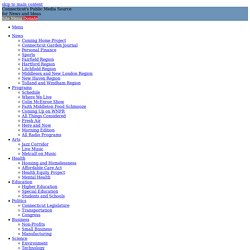 Since their television debut in 1938 we've seen everything from microwave ovens to million dollar payouts awarded to lucky contestants. Now, in a television culture increasingly captivated by reality T.V., we see traditional game shows being crowded out by reality competition shows at an alarming rate. The History of The Price is Right. The Price is Right began on November 26, 1956 on NBC. 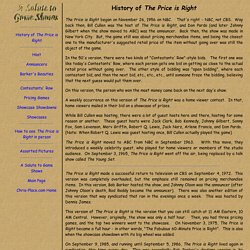 That's right - NBC, not CBS. The [Original] Price is Right. "Today, these four bargain hunters match their shopping skills, as (sponsor) presents...The Price is Right: the exciting game of bidding, buying, and bargaining!

Before Bob Barker, a studio audience and multiple rounds....there was this version. – macydiri

" "Tonight, these four contestants meet to compete for the prizes of a lifetime on...The Price is Right! 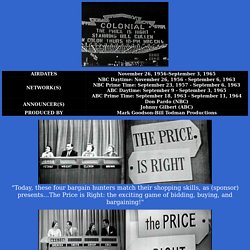 " "Backstage are some of the most exciting prizes on television...On our panel tonight is (celebrity guest)...Stand by for The Price is Right! " Before "Come on down! " First Episode: September 4, 1972. Cliff Hanger's History. The Price Is Right Timeline. From Golden-Road.net FAQ This FAQ section is an attempt to chronicle every major event in the history of The Price Is Right, as well as to list the episodes in the order they were supposed to air in. 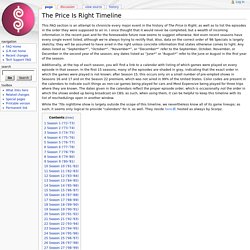 I once thought that it would never be completed, but a wealth of incoming information in the recent past and for the foreseeable future now seems to suggest otherwise. Not even recent seasons have every single event listed, although we’re always trying to rectify that. This Day in TV History. What Happens When You Win? In entertainment, an awful lot of stuff happens behind closed doors, from canceling TV shows to organizing music festival lineups. 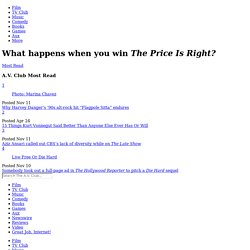 While the public sees the end product on TVs, movie screens, or radio dials, they don’t see what it took to get there. In Expert Witness, The A.V. Club talks to industry insiders about the actual business of entertainment in hopes of shedding some light on how the pop-culture sausage gets made. Everyone, at some point in life, has watched The Price Is Right and wondered, “What would I do if I won the Showcase?” Andrea Schwartz actually knows. The A.V. I won The Showcase Showdown on The Price is Right! : IAmA. Winning: Strategies for the Price is Right. Photo by Mark Davis/Getty Images On a crisp November day eight years ago, I took the only sick day of my four years of high school.

How to win...there's a strategy? Click here to learn more. – macydiri

I was laid up with an awful fever, and annoyed that I was missing geometry class, which at the time was the highlight of my day. 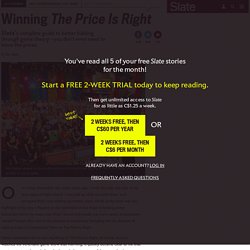 One contestant truly gives away his secret to beating the game. – macydiri 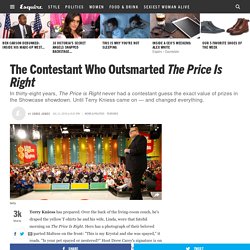 She had missed by just $494 — a remarkably close bid, since trips were notoriously difficult to figure. Trips were budget savers. Then came Terry. "You bid $23,743," Carey said through his teeth. Today, at his kitchen table, Terry says he'd seen all three prizes before. 'Official' Rankings of The Price is Right Games.

Finally someone has gone through every PiR game and ranked them on fun, props and prizes. – macydiri

Biggest Winner in History. Come on down, Sheree Heil, and celebrate the biggest win in daytime "Price Is Right" history!

This women went home with the biggest prize in PiR history! Over $150,000 in prizes!! – macydiri

The long-running game show on Monday tweeted that contestant Heil had won an Audi R8 Spyder Quattro among other prizes and cash to become the biggest winner with winnings totaling $170,345. 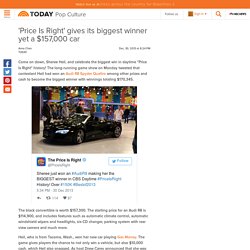 The black convertible is worth $157,300. The starting price for an Audi R8 is $114,900, and includes features such as automatic climate control, automatic windshield wipers and headlights, six-CD changer, parking system with rear view camera and much more. Heil, who is from Tacoma, Wash., won her new car playing Gas Money. Second-Biggest Winner. By: Chris Chase | October 15, 2013 10:27 am A party princess from Los Angeles became the second-biggest winner in the history of The Price Is Right when she took home more than $140,000 in cash and prizes Monday to start the show’s second annual “Big Money Week.” 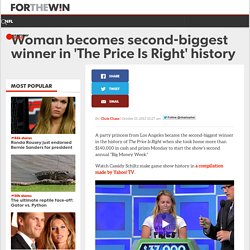 Watch Cassidy Schiltz make game show history in a compilation made by Yahoo! TV. Schiltz, who hails from Houston, works as a party princess, which means she dresses up and attends children’s birthday parties. The Stupid Perfect Bid. The Clock Game Spectacular.

This girl did NOT need 30 seconds to win that much money.. – macydiri

Carey goes down in history with her shot at winning big during Plinko. – macydiri

Luckiest Contestant Ever! The Worst Bid In TPIR History? The Price Is Right isn’t exactly a game for intellectuals.

All a person needs to know to participate is a general knowledge of the cost of household items and enough savvy to get the most of his or her bid. 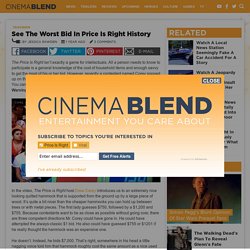 However, recently a contestant named Corey popped up on the long-running show and quickly proved he was lacking in both skill sets. One Prize. Many dumb bids.

Doesn't seem like anyone could get away from the dumb bids on this round. – macydiri

A Really Bad Game.... Old School April Fools: Model's Time. A Model Proposal. Big Screw Ups. The Price Is Right model Manuela Arbelaez made news last week when, during a playing of the show’s Five Price Tags game, she mistakenly revealed the price of a car before the game was over.

Not everything goes as planned during a daily TV taping... – macydiri

Host Drew Carey did the right thing by awarding the prize to the contestant, and the $21,960 mishap led some fans to wonder whether Manuela had lost her job as a Price model. No, she hadn’t, and she reassured her fans that the producers were understanding—as well they should be. This is hardly the first time that a staff mistake caused a prize to be awarded to a player. Top 5 Bloopers. Manuela's Moment. A Contestant's Awkward Convo. The Price is Right recently featured an excited contestant, a contestant who was so pumped, in fact, that she said some pretty silly things on the stage when host Drew Carey asked her about her residence and occupation.

What happens when you get a little too excited.. – macydiri

Check out the giggle-filled segment, below. It’s not unusual for game shows to ask for basic information from contestants. Questions like “where are you from?” And “what do you do?” Are pretty common, but answers like “I am a student of education in college” are not. At least her gal pal recognized that she needed to be embarrassed for her friend. To give the girl some credit, she was smart enough to win the early bidding round and actually make it up on stage. Woman in Wheelchair Wins Treadmill. This may go down as one of the most uncomfortable moments in game show history. On Tuesday’s episode of The Price is Right, a woman in a wheelchair won a treadmill. Irony, thy name is Drew Carey.

The contestant in question is named Danielle. To be fair, she took the whole matter in stride once the treadmill was revealed and seemed genuinely excited that was one of the prizes. Aaron Paul's Brief TPIR Stardom. Before there was Walter White, there was Bob Barker.

You may know him better as Jesse Pinkman, but Aaron Paul got his brief minute of stardom on PiR years ago. – macydiri

Aaron Paul can't help but laugh off his brief stint as a then-anonymous game show contestant on The Price Is Right in 2000. While promoting his latest flick Need for Speed, the actor joked about his "come on down" moment to a CBS affiliate station in Boston. PHOTOS: Breaking Bad stars -- before they were famous "It looks like I'm on some serious crack," Paul, 34, joked. "I downed about six cans of red bull because I knew they wanted people with energy. Amber Breaks the Set. Daytime TV: the thing that always made going home from school sick just a little bit better. Game shows in general have a tendency to follow some pretty straightforward formulas, so it’s always hilarious to see when something unexpected happens. A recent episode of The Price Is Right featured one of those quintessentially unexpected moments, check it out below: 10 Unbelievable Moments in 'Price is Right' History.

You need to read all of these! – macydiri

What Makes TPIR TV's Most Successful Show Ever.

We all know it's been around forever...but what makes it so successful? – macydiri

What nobody will tell you but everyone wants to know. – macydiri

What You've Always Wanted to Know About TPIR. The Evolution Of The Showcase Podium. General Questions of TPIR. From Golden-Road.net FAQ.

The general Q&A that every rookie PiR fan must know the answers to! – macydiri

A History of TPIR Models.

There have been many models in the 40 years of PiR, but these sum up some of the very best. – macydiri

How to Make a Shirt for TPIR.

To get on stage, you need to wear the best PiR shirt you can think of. Here's how. – macydiri

In 2007, Bob Barker decided it was time to "Come on down" to a new stage in life: retirement. Learn about his replacement, Drew Carey. – macydiri

Although Bob is retired now, he has been on several TV shows and movies and still makes his little debuts in random entertainment pieces. Here's his relationship in movies with comedian Adam Sandler. – macydiri

Finally, the crew of PiR comes together to help us figure out some hard-to-solve game show mysteries. – macydiri

For the cast, crew, games, videos, photos, polls and more, head to The Price is Right.com – macydiri