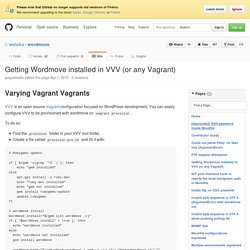 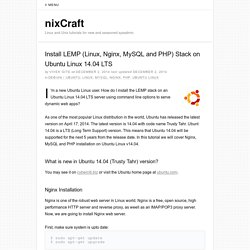 How do I install the LEMP stack on an Ubuntu Linux 14.04 LTS server using command line options to serve dynamic web apps? As one of the most popular Linux distribution in the world, Ubuntu has released the latest version on April 17, 2014. The latest version is 14.04 with code name Trusty Tahr. Ubunt 14.04 is a LTS (Long Term Support) version. This means that Ubuntu 14.04 will be supported for the next 5 years from the release date. What is new in Ubuntu 14.04 (Trusty Tahr) version? You may see it on cyberciti.biz or visit the Ubuntu home page at ubuntu.com.

This article shows how to quickly get up and running with Vagrant, to create and use local Virtual Machines as development environments, all with a single command. 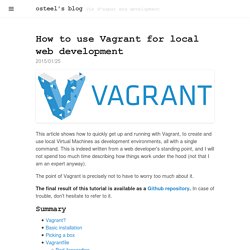 This is indeed written from a web developer's standing point, and I will not spend too much time describing how things work under the hood (not that I am an expert anyway). The point of Vagrant is precisely not to have to worry too much about it. The final result of this tutorial is available as a Github repository. In case of trouble, don't hesitate to refer to it. Summary Vagrant? Vagrant greatly simplifies the use of Virtual Machines to spawn development environments in no time (well, it's probably more like no effort than time). To understand what a Virtual Machine (VM) is, think of an emulator: you install it on your computer so you can then run software that believe they are running in the environment they were designed for. That is essentially what a VM is.

It relies on a VM provider, that deals with virtualization itself. Setting up EasyEngine on Ubuntu 14.04 + PHP 5.5 + Nginx + Memcached Object cache - Useful Snippets. Untitled. Vagrantfile Explained: Setting Up and Provisioning with Shell. In the introduction, we showed you how to create a Vagrant base box, installing the latest Ubuntu 14.04 LTS in the virtual machine to use it as the guest operating system. 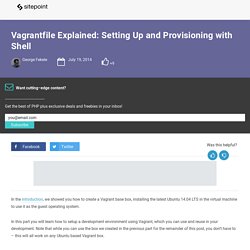 In this part you will learn how to setup a development environment using Vagrant, which you can use and reuse in your development. Note that while you can use the box we created in the previous part for the remainder of this post, you don’t have to – this will all work on any Ubuntu based Vagrant box. The Vagrantfile The primary configuration location for any Vagrant development environment is a file called Vagrantfile which you need to place in your project’s folder. The configuration syntax of this Vagrantfile is Ruby, but you do not need to be a Ruby programmer or have any knowledge of the programming language to write this configuration file. 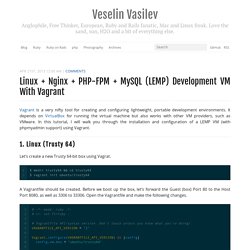 It depends on VirtualBox for running the virtual machine but also works with other VM providers, such as VMware. In this tutorial, I will walk you through the installation and configuration of a LEMP VM (with phpmyadmin support) using Vagrant. 1. Linux (Trusty 64) Let’s create a new Trusty 64-bit box using Vagrat. A Vagrantfile should be created. Let’s start up the box You should see this output Now we can SSH into the box: Stop using MAMP. Here's a laughably simple way to get setup with a LAMP stack with PHP 5.5. How To Install WordPress Locally With Vagrant. Developing locally is one of the best things that can happen to you. 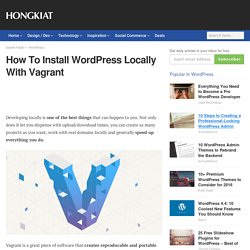 Not only does it let you dispense with upload/download times, you can create as many projects as you want, work with real domains locally and generally speed up everything you do. Vagrant is a great piece of software that creates reproducable and portable virtual machines which you can use as local web server environments. In this article I’ll show you why Vagrant is so awesome and how you can get up and running with awesome WordPress testing environments pretty quickly. You may also be interested in the following posts: