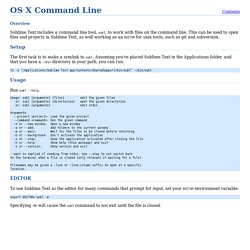 This can be used to open files and projects in Sublime Text, as well working as an EDITOR for unix tools, such as git and subversion. Setup The first task is to make a symlink to subl. Ln -s "/Applications/Sublime Text.app/Contents/SharedSupport/bin/subl" ~/bin/subl Usage Run subl --help, To use Sublime Text as the editor for many commands that prompt for input, set your EDITOR environment variable: export EDITOR='subl -w' Specifying -w will cause the subl command to not exit until the file is closed. How to add “Open in Sublime Text” service to any folder or a file on Mac – Shell Script. Hello everyone, I have been using the sublime text lately. 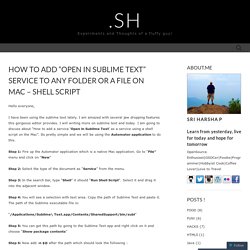 I am amazed with several jaw dropping features this gorgeous editor provides. I will writing more on sublime text and today I am going to discuss about “How to add a service ‘Open in Sublime Text‘ as a service using a shell script on the Mac”. Its pretty simple and we will be using the Automator application to do this. Step 1: Fire up the Automator application which is a native Mac application. Step 2: Select the type of the document as “Service” from the menu. Step 3: In the search bar, type “Shell” it should “Run Shell Script“.

Step 4: You will see a selection with text area. “/Applications/Sublime\ Text.app/Contents/SharedSupport/bin/subl” Step 5: You can get this path by going to the Sublime Text app and right click on it and choose “Show package contents” Step 6: Now add -n $@ after the path which should look the following : Popular Packages - Package Control. Sublime Text - Download. Download Sublime Text 3 is currently in beta. 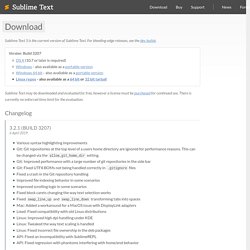 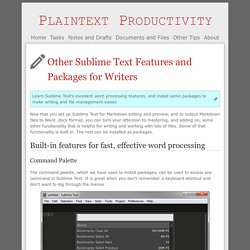 Now that you set up Sublime Text for Markdown editing and preview, and to output Markdown files to Word .docx format, you can turn your attention to mastering, and adding on, some other functionality that is helpful for writing and working with lots of files. Some of that functionality is built in. The rest can be installed as packages. Built-in features for fast, effective word processing Command Palette The command palette, which we have used to install packages, can be used to access any command in Sublime Text. Goto Anything Control+p opens Sublime Text's Goto Anything panel. Minimap Sublime Text shows you a miniature version of your entire file in the upper right-hand corner. Expand selection Control+l selects the entire line you are editing. Similarly, control+d selects the word your cursor is on. Find/Replace Quickly moving lines/paragraphs up and down Word Count. 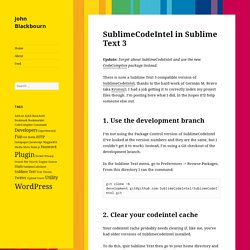