Apple Leak Reveals 'All Curve Display' New iPhone. Apple after its launch of the new iphone 7 and iphone 7 plus has been planning about making the next iphone 8 to be a remarkable phone. 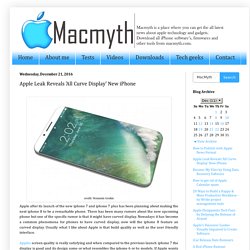 There has been many rumors about the new upcoming phone but one of the specific rumor is that it might have curved display. Nowadays it has become a common phenomena for phones to have curved display, now will the iphone 8 feature an curved display. Usually what I like about Apple is that build quality as well as the user friendly interface. Apples screen quality is really satisfying and when compared to the previous launch iphone 7 the display is good and its design some or what resembles the iphone 6 or 6s models.

If Apple wants to install new curved displays on its upcoming phone it must be in such a way that its design should be pocket friendly and light weighted so that it can be easily carried around. How to Publish with Apple News Format. Check out what is new about apple. 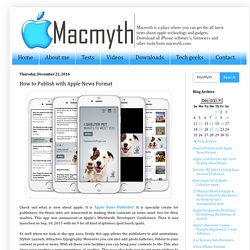 It is Apple News Publisher. It is specially create for publishers; for those who are interested in making their contents or news more live for their readers. This app was announced at Apple’s Worldwide Developers Conference. Then it was launched on Sep, 16, 2015 with ios 9 for all kind of iphones, ipod touch, ipads. So well when we look at the app uses, firstly this app allows the publishers to add animations, Stylish Layouts, Attractive typography. Apple uses JavaScript Object Notation (JSON). Moreover Apple gives you many advertising opportunities. How to Publish with Apple News Format. iCar Release Date Rumours. We have so long heard rumors about Apple working on developing a self driving iCar but none has been supported or disapproved by the Apple. 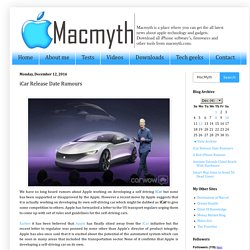 However a recent move by Apple suggests that it is actually working on developing its own self-driving car which might be dubbed as iCar to give some competition to others. Smart Map Aims to Avoid 5G Dead Zones. Owing to new data rich maps by Ordnance Survey, the next generation smartphone can evade signal drop-outs. 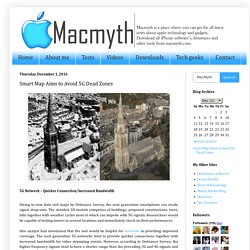 The detailed 3D models comprises of buildings, proposed constructions, trees, hills together with weather cycles most of which can impede with 5G signals. Researchers would be capable of testing towers in several locations and immediately check on their performances. One analyst had mentioned that the tool would be helpful for networks in providing improved coverage. The next generation 5G networks tend to provide quicker connections together with increased bandwidth for video streaming events.

What to Expect in the Coming iPhone 8. Google Cut People Off From Gmail for Reselling the Pixel Phone. Ever since Google started selling its flagship Pixel devices a number of shady resellers has emerged who are offering the device above its marked price. 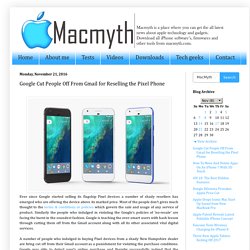 Most of the people don’t gives much thought to the terms & conditions or policies which govern the sale and usage of any service of product. Similarly the people who indulged in violating the Google’s policies of ‘no-resale’ are facing the burnt in the soundest fashion. Google is teaching the over-smart users with hash lesson through cutting them off from the Gmail account along with all its other associated vital digital services. A number of people who indulged in buying Pixel devices from a shady New Hampshire dealer are bring cut off from their Gmail account as a punishment for violating the purchase conditions.

Google was able to detect user’s online purchase and thereby successfully judged that the purchase has made a distinct violation of its terms of service. iOS 10: The Best Hidden Features. Apple has released the latest version of its mobile operating system titled ‘iOS 10’ for its iPad and iPhone devices just a few months ago. iOS 10 brought a wide number of changes and tweaks to Apple’s apps along with the overall feel and look of the OS as a whole. 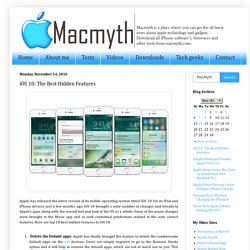 Some of the major changes were brought to the Music app and as well contextual predictions related to the auto correct features. Here are top 10 best-hidden features in iOS 10. Dongle Dilemma Provokes Apple Price Cut. Apple has started a war against the connectivity ports a long time ago. 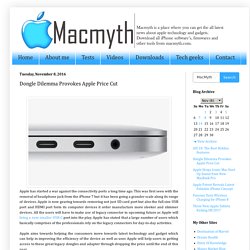 This was first seen with the removal of headphone jack from the iPhone 7 but it has been going a grander scale along its range of devices. Apple is now gearing towards removing not just SD card port but also the full size USB port and HDMI port form its computer devices it order manufacture more sleeker and slimmer devices. Apple Drops Iconic Mac Start Up Sound from New MacBook Pro. Since 1998 Apple computers have been instantly recognized and unchanged though with the release of the new MacBook Pro recently, which has no power button and tends to turn on automatically when it is opened, possibly making the start-up sound old-fashioned.

It does not seem to be the traditional USB port and Apple had done away with the iconic sound which the laptops tend to make when it starts up. The chime which is a fading F sharp chord has been utilised on all Mac since the iMac G3. An FAQ page with details of Mac computers portrays troubleshooting instructions for the latest MacBooks, without any mention of the start-up sound.The new laptops of Apple feature a new touchscreen - `Touch Bar’ which is above the keyboard and Touch ID fingerprint recognition. The same is said to be released somewhere in mid-November. Start-up on Opening/Plugged in The new MacBook would now not be blaring out when it is opened up in public places or between meetings. Most Iconic Thing Taken Away. iPhone 7 Storage is Slower but It Really Does Not Matter. Situations are developing and we are in a time, where timing is beginning to matter to Apple iPhone customers. 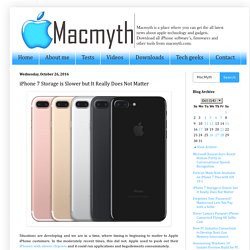 In the moderately recent times, this did not. Apple used to push out their iPhones with slower chipsets and it could run applications and beguilements consummately. Today, the A10 Fusion chipset from Apple, can without quite a bit of an extend run drifts around its Android accomplices. iPhone 7 plus has the fastest ever processor speed we can crave for but somehow with respect to benchmark, this inclusion is abundance. Writing speed does not require much speed- Hover Camera Passport iPhone Connected Flying 4K Selfie Cam. The latest released Hover Camera Passport is said to be one of the most exceptional flying cameras having a durable and portable lightweight design together with competitive price which is easy to use through an iPhone app. 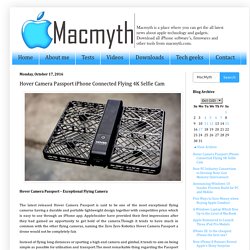 AppleInsider have provided their first impressions after they had gained an opportunity to get hold of the camera.Though it tends to have much in common with the other flying cameras, naming the Zero Zero Robotics Hover Camera Passport a drone would not be completely fair. Instead of flying long distances or sporting a high end camera and gimbal, it tends to aim on being simple as possible for utilisation and transport.The most remarkable thing regarding the Passport is its design which when folded; being the size of an old VCR tape tends to be almost half a pound and is much lighter than expected. The protective grates enable the users to hold the Passport safely without any anxiety of the propellers cutting the fingers.

Linked to iOS Device. Announcing Windows 10 Insider Preview Build for PC and Mobile. Microsoft Windows 10 made its debut a year ago where it promised free up gradation to all the computer system around the world either running on Windows 7 or 8 OS. At that time Microsoft even brought its own Insider build program wherein users used to get previews of new features and functionalities in order to improve the overall experience of new operating system.

At present Microsoft has decided to kill the old Windows 10 Insider builds for once and all to put an end to this great system. In a post released online Microsoft official has made it clear that all the older Insider Preview build will simply stop working from 15th October. Rebooting issue will resolved A number of users have complained about their PC rebooting after every three hours since October 1. iPhone SE: Is the cheapest iPhone the best one? We all dream about using an iPhone but with high prices those dreams crush right in front of our eyes. What if there was a way in which you can have an iPhone that you can easily afford? Feeling excited yet? Presenting the new iPhone SE which provides the looks of an iPhone 5S but contains features and technology that has been used in the newer iPhone 6S models.

Moreover the trust of the Apple Brand makes iPhone SE irresistible and a must buy if you are looking for a budget phone. As the phones these days are getting bigger and bigger, iPhone SE begs to differ from the common trend and presents you a phone that can easily fit in your hand. iPhone SE’s small size packs a powerful punch in terms of its compact features and a stylish and classy design. iPhone SE comes preloaded with excellent features. Apple Files New Patent - for a Paper Bag. Apple tends to file for new patent application on various things and when it does so, people seem to take an account of it. The latest patent application is for a drumroll, a paper bag. It is not any old bag but `a bag container which is formed of white solid bleached sulfate paper having at least 60% of post-consumer content. You Need To Update Your iPhone Right Now. Users need to update their iPhone to the latest operating system iOS 9.3.5 and to do it; they could go to Settings app and tap `General’ followed by `Software Update’ and then tap `Download and Install’.

Apple Mac Virus Can Take Screenshots and See Everything You Type. Owners of Apple Mac are being cautioned regarding a latest dangerous virus which seems to view all things typed, takes screenshots every thirty seconds as well as accesses all your documents and the videos.Some years back, Flashback malware had broken a security flaw in Java and managed to infect 600,000 Macs, roughly 1% of the user base. Apple’s iPhone 7 Latest Snazzy Salvo in Encryption War. Hacker 'Guccifer' Jailed for Four Years. A hacker that is believed to hails from Romania who has targeted US politicians that maintain a high profile has been sentenced to a prison period of 52 months. His name is Marcel Lazar however online he is commonly known as "Guccifer".

It was in May that he pleaded guilty for theft of aggravated identify as well as access of computers that were unauthorized. Siri's Voice to Benefit from Machine Learning Improvements in Apple's iOS 10. MacMyth.