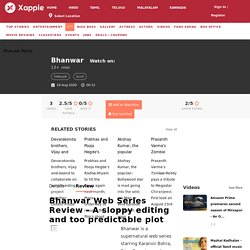 The show is streaming on Zee5 from August 18. Bhanwar Story: The story of Bhanwar is about a couple Ranvir Makhija and Kanika Makhija, played by Karanvir Bohra and Priya Banerjee respectively, who acquire a lavish apartment at an undear price only to discover later that it is haunted. Lock Up Movie Review: An Engaging Thriller Zee5. Vaibhav and Venkat Prabhu starrer Lock Up recently had a direct release on Zee5 and the thrilling elements in the film created enough curiosity on the film. 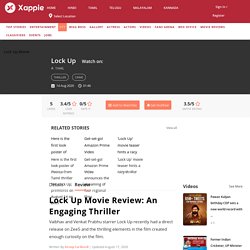 Lock Up Movie Story: The movie starts off with the murder of a police officer and the suicide of a woman. A lady cop Ilavarasi (Easwari Rao) takes up the case. In the process of investigation, we come across two other police officers, Vasanth (Vaibhav ) and Murthy (Venkat Prabhu). Khuda Haafiz Movie Review: This Vidyut Jamwal starrer will entertain you in parts Disney + Hotstar. Khuda Haafiz movie starring Vidyut Jamwal, Annu Kapoor, Shivaleeka Oberoi in lead roles, this film is a thriller and which needs some repairs in between. 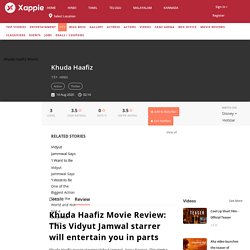 Khuda Haafiz Movie Story: Sameer Chaudhary (Vidyut Jamwal) marries Nargis (Shivaleeka Oberoi) at a grand wedding and since then, the couple looks forward to spending their entire life together happily. After losing their jobs due to recess, the couple starts looking for jobs and that’s when Nargis applies for a job in a Middle East Country Noman. Sameer also manages to get a job there but their agent tells him that Nargis has to go first because there is a delay in the paperwork for Sameer’s job. After a day, he receives a call from Nargis who sounds terrified. Ram's Red finally opts for an OTT release; will premiere soon on Amazon Prime Video - Telugu Movie News. Ram Pothineni teamed up with director Kishore Tirumala for the third time and their project RED will soon release on Amazon Prime Video as the option for a theatrical release got ruled out in the current situations. 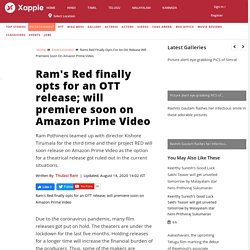 Written By Thulasi Ram |Updated: August 14, 2020 14:02 IST Due to the coronavirus pandemic, many film releases got put on hold. The theaters are under the lockdown for the last five months. Holding releases for a longer time will increase the financial burden of the producers. Thus, some of the makers are releasing their movies directly on OTT platforms. Initially, the makers of Red planned to release the film on April 9. Red features Malvika Sharma and Amritha Aiyer as the female leads. Johaar movie trailer review: impressive and raises the curiosity on the film's release tomorrow on Aha video - Telugu Movie News. Johaar is the upcoming Telugu movie releasing on OTT platform Aha video and there are aggressive promotions happening for the movie and the trailer has impressed everyone big time Written By Thulasi Ram |Updated: August 13, 2020 17:19 IST 'Johaar' is an upcoming Telugu film which is going to get a direct OTT release on the Aha video app. 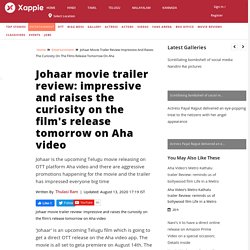 The movie is all set to geta premiere on August 14th. The film unit marks the debut of a new director. Subhalekha Sudhakar, Easwari Rao, Ankit Koyya, Naina Ganguly, Esther Anil etc are playing crucial roles in the film under the direction of Teja Marni. Aha Video's Metro Kathalu trailer Review: reminds us of bollywood film Life in a Metro - Telugu Movie News. Metro Kathalu will stream on Aha from August 14th and is directed by Karuna Kumar. 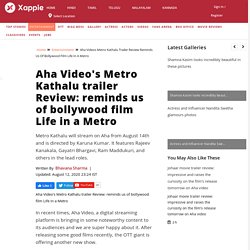 It features Rajeev Kanakala, Gayatri Bhargavi, Ram Maddukuri, and others in the lead roles. In recent times, Aha Video, a digital streaming platform is bringing in some noteworthy content to its audiences and we are super happy about it. After releasing some good films recently, the OTT giant is offering another new show. The trailer of Metro Kathalu, a Karuna Kumar directorial released on social media today and it reminds us of Life in a Metro which was directed by Anurag Basu. Gunjan Saxena: The Kargil Girl Movie Review Netflix. Janhvi Kapoor starrer Gunjan Saxena is an emotional tale of a warrior and her father worth giving a watch for the magnificent performances Gunjan Saxena: The Kargil Girl Movie Story: It was back then during the Kargil war in 1999 when the need of the hour was an Air Force pilot who is strong, courageous, and smart. 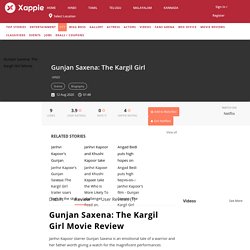 Then comes Gunjan Saxena (Janhvi Kapoor), a 24-year-old young lady whose dream is to become an Air Force Pilot. The profession she chose and the path it has, is not so easy to reach or travel because it rages war against the patriarchal mindset and discrimination which are indeed a big threat to the progress. So will Gunjan overcome all the odds and proves her mettle? It is 2020 and we all are still busy stereotyping women. Gunjan Saxena: The Kargil Girl movie review. Vidya Balan says she pays more attention to her inner voice rather than focusing on advice from other people - Hindi Movie News. Vidya Balan is currently busy promoting her upcoming film, Shakuntala Devi. 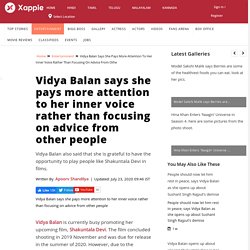 The film concluded shooting in 2019 November and was due for release in the summer of 2020. However, due to the Coronavirus pandemic, the film got postponed indefinitely. The filmmakers finally decided to skip theatrical release and premiere on Amazon Prime Video. In a recent interview, Vidya Balan has said that she is always looking to play different characters in all her films. She said, "As an actor, I am greedy to play different women on screen, to live different lives. Sanjay Dutt's menacing look as Adheera from KGF Chapter: 2 is out; Have a look at it right away - Telugu Movie News. KGF Chapter: 2 is one of the most anticipated upcoming films of this year. 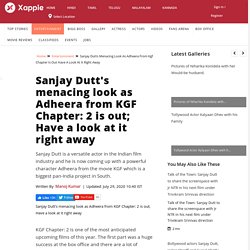 Buzz: Trinadha Rao Nakkina's film with Ravi Teja is a remake of Chiranjeevi's super hit; Can you guess the movie - Telugu Movie News. Ravi Teja is now gearing up to come with a series of interesting movies and he wanted to undergo a huge changeover for which he's getting inspired by a movie starring Chiranjeevi Actor Ravi Teja is in dire need of a hit. 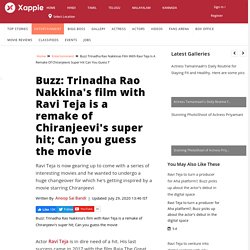 His last success came in 2017 with the film Raja The Great. After that, he made four films and all of them turned out to be flops. To strike back hard, Ravi lined up a series of interesting projects. One of them is with director Trinadha Rao Nakkina. Dulquer Salmaan teases the fans on his birthday with a powerful sneak peek into the world of his next film. Kurup; Check it out - Malayalam Movie News. Dulquer Salmaan signs a straight film in Telugu under Hanu Raghavapudi's direction; Official Announcement is out - Telugu Movie News. Priyanka Chopra thanks husband Nick Jonas on the 2nd anniversary of his proposal with an aww-adorable note - Hindi Movie News. Priyanka Chopra shared an emotional note that she penned for Nick Jonas; Nick Jonas proposed to Priyanka 2 years ago, the day after her birthday!

Power-couple Priyanka Chopra and Nick Jonas are celebrating their second anniversary of his proposal to her! Priyanka shared an adorable photo to celebrate the occasion. Lavanya Tripathi gears up to sign bold roles; Read more about the details of her upcoming films - Telugu Movie News. Disha Patani's video of herself dancing to Beyonce's popular track Yonce - Hindi Movie News. Anushka Sharma & Virat Kohli’s live chat on how to keep fit during the lockdown - Hindi Movie News. Despite the nationwide lockdown, the power couple, Bollywood actress Anushka Sharma and Indian Cricket Captain Virat Kohli, have not given up maintaining a healthy and fit lifestyle. They are residing in their guest house, far from the city chaos. They recently did a live chat to interact with their fans and give them some tips to stay positive, healthy and fit at home during these difficult times.

They said they haven’t had to bring about major changes to their routine, but the actress did comment that, “I think Virat and me are people who do not believe in diets and we just have a lifestyle which is very healthy. We have always been like that.” She went to share their exercise and diet routine, in her words, “There are certain things we don’t eat because they are not good for you, we try to eat food which is alkaline so it’s kind of easy on the stomach and keeps you healthy because if your body is alkaline your immunity is good and that’s something that we have always followed.” Priyanka Chopra Jonas and Vaani Kapoor groove to the beats of Hrithik Roshan's Ghungroo - Hindi Movie News. Kangana Ranaut defends sister Rangoli Chandel, says 'Social media platforms must be demolished & we should start one of our own' - Hindi Movie News.

Shraddha Kapoor shares a collage of her vacation trips on the occasion of World Earth Day - Hindi Movie News. Today, we celebrate the 50th International Earth Day. This is the occasion to thank the mother Earth for giving us the abundance of natural resources and beautiful nature to live with. Human beings are often considered as powerful creatures on the earth. Unfortunately, we are the same ones who are destroying the earth for our own needs. It is high time that we realize our mistake and give earth the respect it deserves. Meanwhile, celebrities are pouring in their wishes of the World Earth Day and are also sharing the greatness of it. Janhvi Kapoor and Kushi Kapoor look elegant in this throwback picture - Hindi Movie News.

Priyanka Chopra shares hair care tips with fans through social media - Hindi Movie News. Priyanka Chopra is currently staying with her husband Nick Jonas outside the country. She has shared various homely tips on how to take care of your hair. Like a true 'desi girl', Priyanka took to her Instagram to share secrets behind her own gorgeous and beautiful hair. Lately, many other stars have also shared tips on healthy eating and exercise. Stars have urged their fans to take care of their health amid the ongoing Coronavirus lockdown. The Sky is Pink actress has shared a trick to take good care of hair without even spending too much out of your pocket. Pushpa: Kiara Advani to do an item song in Allu Arjun's upcoming film Pushpa - Telugu Movie News. Nabha Natesh reveals the secret behind her new hair curls - Telugu Movie News. Shah Rukh Khan and Kareena Kapoor Khan to make a comeback together on screen for film with Rajkumar Hirani? - Hindi Movie News. Deepika Padukone calls Ranveer Singh-Zoya Akhtar’s win historic - Hindi Movie News.