Governing. BY: Michael Scott | April 21, 2014 Sharing and collaboration have long been a universal characteristic for cities. 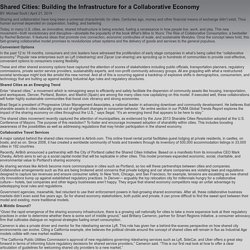 Centuries ago, money and other financial means of exchange didn’t exist. Public Leadership and the Collaboration Imperative. Collaborative leadership is the ability to inspire and bring about collective action across diverse stakeholder groups to achieve a shared goal. 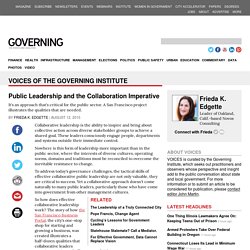 These leaders consciously engage people, departments and systems outside their immediate control. Nowhere is this form of leadership more important than in the public sector, where the interests of diverse cultures, operating norms, domains and traditions must be reconciled to overcome the inevitable resistance to change. To address today's governance challenges, the tactical skills of effective collaborative public leadership are not only valuable, they are critical to success. Yet a collaborative approach doesn't come naturally to many public leaders, particularly those who have come into government from other management cultures. So how does effective collaborative leadership work? Collaborative leaders create shared purpose that addresses the needs of all impacted partners. A New Standard for What Works in City Government. The movement to make government more data-driven has dramatically accelerated in the past decade. 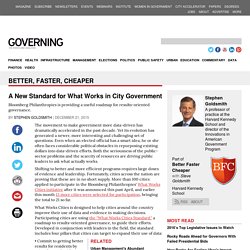 Yet its evolution has generated a newer, more interesting and challenging set of questions. Even when an elected official has a smart idea, he or she often faces considerable political obstacles in repurposing existing dollars into data-driven efforts. Both the seriousness of the public-sector problems and the scarcity of resources are driving public leaders to ask what actually works. Shifting to better and more efficient programs requires large doses of evidence and leadership. Fortunately, cities across the nation are proving that these are in no short supply. What Works Cities is designed to help cities around the country improve their use of data and evidence in making decisions. . • Commit to getting better results for residents by using data and evidence. • Measure progress and engage citizens along the way. Bloomberg Philanthropies Expands Data Help to 13 More Cities. Thirteen new cities will get coaching and technical assistance from national experts on public data and performance management, according to an announcement Thursday from Bloomberg Philanthropies. 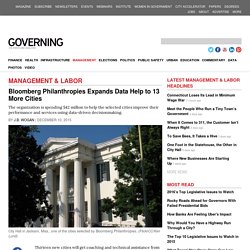 The initiative, “What Works Cities,” pairs mayors’ offices with nonprofits and university partners. Bloomberg Philanthropies, the foundation started by former New York City Mayor Michael Bloomberg, has set aside $42 million over the next two years to pay organizations for the help they will provide to cities. The thirteen cities announced on Thursday are the second batch after an initial eight joined the consortium in August. Four months ago, Jackson, Miss., became one of the initial cities, and it started with less of a foundation than some of the others in the first cohort.

About - Cities for People. Cities have the capability of providing something for everybody, only because, and only when, they are created by everybody. 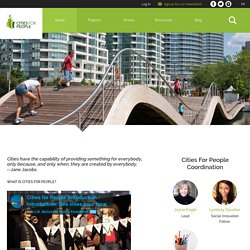 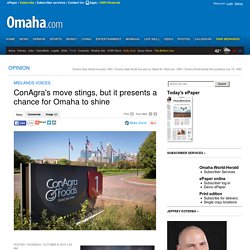 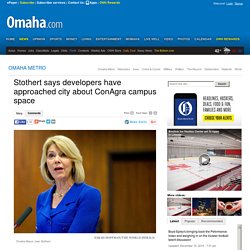 In effort to keep ConAgra in Omaha, city never stood a chance - Omaha.com: Money. The head of Omaha’s chamber of commerce thought there might be a chance to persuade ConAgra’s CEO to keep the packaged food giant’s headquarters in the city. 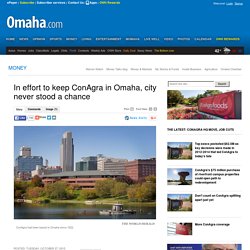 Turns out, Omaha never really stood a chance. ConAgra Foods Chief Executive Sean Connolly had been talking about big changes at the company ever since he took over as CEO on April 6. “Strategic” changes, he had said, using a business buzzword that warned of historic new directions for the company that had been based in Omaha in 1922.

David Brown, chief executive of the Greater Omaha Chamber of Commerce, said he knew that kind of talk oftentimes was code for big changes — possibly even job losses or a headquarters move. ConAgra's $75 million purchase of riverfront campus properties could open path to redevelopment - Omaha.com: Money. ConAgra Foods recently bought three structures on its downtown Omaha campus that it had previously leased, opening the door to a possible redevelopment of the riverfront area. 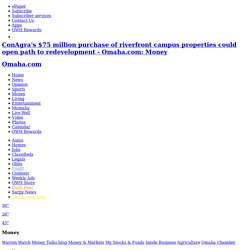 The recent purchases — of 508 and 908 ConAgra Drive and 829 Farnam St. — mark the first major public step related to the future of the sprawling office complex that at least one broker called Omaha’s single most important piece of real estate. Though long associated with the riverfront campus near the Heartland of America Park, ConAgra doesn’t actually own all of the buildings on the site. An outside developer built the campus for ConAgra in the 1980s; it had leased most of the buildings from affiliates related to that developer and other entities over the years. ConAgra now owns three of the five buildings on the campus; it has long-term leases on the two others.

Local governments provide the most essential of public services, such as health and safety, transportation, sanitation, environmental, and utilities. 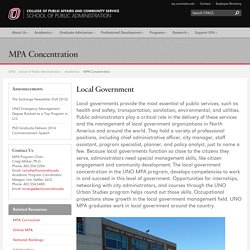 Public administrators play a critical role in the delivery of these services and the management of local government organizations in North America and around the world. They hold a variety of professional positions, including chief administrative officer, city manager, staff assistant, program specialist, planner, and policy analyst, just to name a few. Because local governments function so close to the citizens they serve, administrators need special management skills, like citizen engagement and community development. The local government concentration in the UNO MPA program, develops competencies to work in and succeed in this level of government. Opportunities for internships, networking with city administrators, and courses through the UNO Urban Studies program helps round out those skills. MOPOA. Open space for your mind. Vera Mercer. 7 to be honored for their work shaping Omaha - Omaha.com: Money. 100 in 1 Day Prototypes the Co-created City. When Juan Londono returned from a visit to his hometown in Colombia last year, he realized his new home, Montreal, was ready to launch its own 100 in 1 Day event.

He’d attended a 100 in 1 Day workshop in Bogotá, Colombia during his visit and learned about the grassroots movement erupting in cities around the world. 100 in 1 Day (100 en 1 Día) started in Bogotá in 2012 when a group of students turned an assignment to create six urban interventions into a citywide festival simply by opening the invitation for anyone to create and participate. Two hundred and fifty people led interventions on May 26, 2012 and thousands participated throughout the city. This inspired people in more than 20 cities around the world to do the same.

The City Solution. About us. What Are Your Values? - Decision-Making Skills from MindTools.com. U_III_M_9_pm. Mdc mission vision.