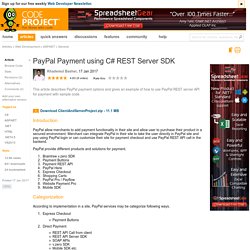 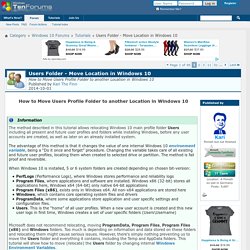 If the sysprep fails, it is always (99% of the cases) a user error. If you are doing this on an existing Windows installation (Method Two in this tutorial), creating a system image before proceeding is even more important. Windows 10, upgrade install: Before starting the upgrade process create a system image as told above. Be it a clean install or an upgrade install, when you have created the system image continue from below. A framework for building native apps using React. This guide describes basic steps of the Android development environment setup that are required to run React Native android apps on an android emulator. 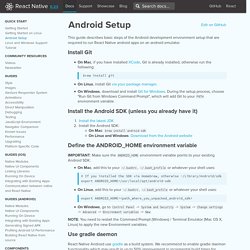 Install Git # On Mac, if you have installed XCode, Git is already installed, otherwise run the following: brew install gitOn Linux, install Git via your package manager.On Windows, download and install Git for Windows. During the setup process, choose "Run Git from Windows Command Prompt", which will add Git to your PATH environment variable. Install the Android SDK (unless you already have it) # Getting Started. C# - Using paypal SDK and custom configuration not from web.config. Setting up your Development Environment (Eclipse, Intellij IDEA, NetBeans) · libgdx/libgdx Wiki. In order to get started you must setup your developement environment. 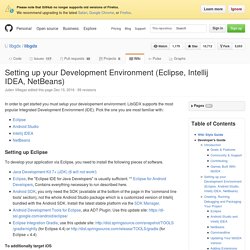 LibGDX supports the most popular Integrated Development Environment (IDE). Pick the one you are most familiar with: Setting up Eclipse To develop your application via Eclipse, you need to install the following pieces of software. Building With Gradle · google/closure-compiler Wiki. Initial Setup To setup a project you must have Gradle installed Init the project: 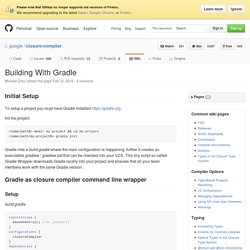 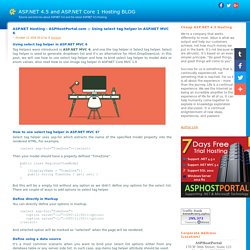 It is a JavaScript library using which we can manipulate documents based on data. The data can be fetched using multiple ways like Web Services, WCF Services, REST APIs or the relatively new Microsoft ASP.NET Web API amongst many others. Using D3, you can bind the data to the Document Object Model (DOM) and present that data with rich visualizations. D3 internally makes use of CSS, HTML and SVG capabilities to make your data presentable. It is powerful, fast and supports large datasets and dynamic behaviors for interactions and powerful and smooth animations. Binding Dropdown List With Database In ASP.NET Core MVC. In this article, we are going to learn how to bind a dropdown list with the database, using Entity Framework Core. 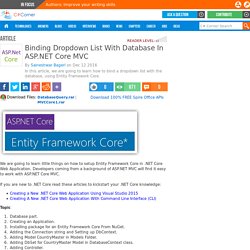 We are going to learn little things on how to setup Entity Framework Core in .NET Core Web Application. Developers coming from a background of ASP.NET MVC will find it easy to work with ASP.NET Core MVC. If you are new to .NET Core read these articles to kickstart your .NET Core knowledge: Topic Database part. Configure Entity Mappings using Fluent API in EF Code-First. Here, we will learn how to configure an entity using Fluent API. 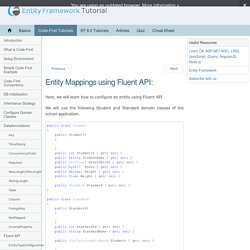 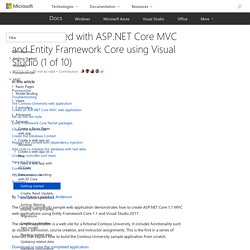 The sample application is a web site for a fictional Contoso University. It includes functionality such as student admission, course creation, and instructor assignments. The ASP.NET Forums. Cascading DropDown List with ASP.NET Core WEB API and AngularJS 2. Earlier I posted about Cascading DropDown List using AngularJS 2 and in this post, we take it to next level and implement it with ASP.NET Core Web API and AngularJS 2. 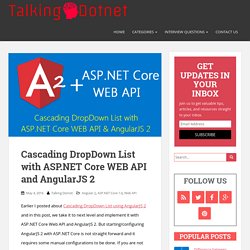 In this post, we will see how to use select tag helper and how to bind select tag helper to model data or enum values. Also read How to use image tag helper in ASP.NET Core MVC 1.0 How to use select tag helper in ASP.NET MVC 6? Select tag helper uses asp-for which extracts the name of the specified model property into the rendered HTML. Dependency injection into views. By Steve Smith ASP.NET Core supports dependency injection into views. Download SQL Server Data Tools (SSDT) Updated: November 17, 2016 SQL Server Data Tools is a modern development tool that you can download for free to build SQL Server relational databases, Azure SQL databases, Integration Services packages, Analysis Services data models, and Reporting Services reports. With SSDT, you can design and deploy any SQL Server content type with the same ease as you would develop an application in Visual Studio.

This release supports SQL Server 2016 through SQL Server 2005, and provides the design environment for adding features that are new in SQL Server 2016. Download Visual Studio Community 2015 If you don't have Visual Studio installed on your machine, installing SSDT will also install a minimal “Integrated Shell” version of Visual Studio 2015. If you do have Visual Studio 2015 Community Edition (or above) installed on your machine, installing SSDT will add the full set of SQL Server tools into your existing Visual Studio installation. Instantiating a class - The complete C# Tutorial. So far, we have worked with .NET types or objects already instantiated. But with Reflection, we can actually do the instantiation at runtime as well, knowing the name of the class we wish to instantiate. There are several ways of doing it, but I prefer getting a reference to the constructor that I wish to use, invoke it, and then use the returned value as my instance.

How To Use HTML5 GeoLocation API With Google Maps. In this tutorial we are going to learn how to use the Geolocation API to get your current latitude and longitude, from these results we can then connect to the Google Maps API to display your location in the browser. Default Router Passwords - The internets most comprehensive router password database. Uitgebreide informatie over ingredient: schenkel. Vertaling. De of het ? Welk lidwoord. Instal config OpenVPN Windows 10. OpenVPN Client Setup Tutorial for Windows 8. OpenVPN Client Setup Tutorial for Windows 8 1. Open your web browser and visit to download the OpenVPN client installer. OpenVPN Client. The purpose of this document is to lead the users to configure theirs OpenVPN clients to access to a VPN server. Babbel. 25 maps that explain the English language.

By Libby Nelson on March 3, 2015 English is the language of Shakespeare and the language of Chaucer. It's spoken in dozens of countries around the world, from the United States to a tiny island named Tristan da Cunha. It reflects the influences of centuries of international exchange, including conquest and colonization, from the Vikings through the 21st century. Animated interactive of the history of the Atlantic slave trade.

Source: slavevoyages.org. Dum Dum%20Bullets 1. ASP.NET MVC 6 New Folder Structure. Introduction This article will describe the new concept which is introduced in ASP.NET 5. Draw MVC Chart Using Web API, AngularJS And JQuery. Let's Encrypt. Tls - SSL encryption and SSL certificates. SSL/TLS begins by a procedure called handshake, in which client and server agree on which cryptographic algorithms they will use (the cipher suite), and do some asymmetric cryptography magic to establish a shared secret, which, for the duration of the session, will be used to do symmetric encryption and integrity checks on subsequently exchanged application data.