Get Windows 10: Microsoft's hidden roadmap for the biggest software upgrade in history. What was already an open secret has now been confirmed (apparently accidentally) by one of Microsoft's partners in the PC supply chain. 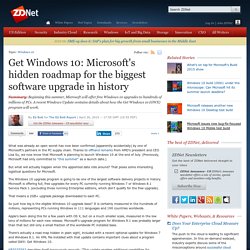 Thanks to offhand remarks from AMD's president and CEO Lisa Su, we now know that Microsoft is planning to launch Windows 10 at the end of July. (Previously, Microsoft had only committed to "this summer" as a launch date.) But what will actually happen when the appointed date rolls around? That poses some interesting logistical questions for Microsoft. The Windows 10 upgrade program is going to be one of the largest software delivery projects in history.

That means a 2GB+ upgrade package downloaded to each PC. So just how big is the eligible Windows 10 upgrade base? Apple's been doing this for a few years with OS X, but on a much smaller scale, measured in the low tens of millions for each new release. Quick Tip: Invoke god mode to take control of settings in Windows 8. Control panel settings and configurations are typically scattered all over in Windows 8, unless you know about god mode. 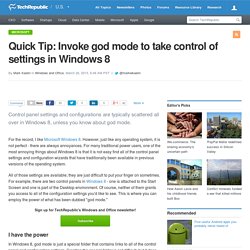 For the record, I like Microsoft Windows 8. However, just like any operating system, it is not perfect - there are always annoyances. For many traditional power users, one of the most annoying things about Windows 8 is that it is not easy find all of the control panel settings and configuration wizards that have traditionally been available in previous versions of the operating system. All of those settings are available; they are just difficult to put your finger on sometimes.

For example, there are two control panels in Windows 8 - one is attached to the Start Screen and one is part of the Desktop environment. In Windows 8, god mode is just a special folder that contains links to all of the control panel and configuration settings. First, open the Desktop and start Windows File Explorer. Figure A Check File name extensions and Hidden items Figure B. 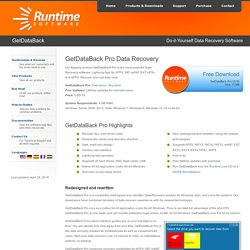 Lightning fast, for NTFS, FAT, and EXT. How Can I Recover Data from a Dead or Erased Hard Drive?

How To Make Windows 8 Go Faster: 8 Tips For Improving Performance - FrontMotion Firefox. Whatever you think of Windows 8 (at MakeUseOf, our opinions are mixed), it’s certainly speedy. 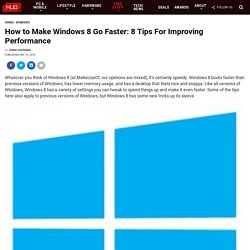 Windows 8 boots faster than previous versions of Windows, has lower memory usage, and has a desktop that feels nice and snappy. Like all versions of Windows, Windows 8 has a variety of settings you can tweak to speed things up and make it even faster. You can learn a whole lot about tweaking the OS in our Windows 8 guide. Some of the tips here also apply to previous versions of Windows, but Windows 8 has some new tricks up its sleeve. As always, there are trade-offs when using some of the below tricks – there’s no magic “Go Faster” button. Disable Time-Wasting Animations Windows 8 (and Windows 7) display animations when you minimize, maximize, open, or close application windows. To disable the animations, press the Windows key, type SystemPerformanceProperties, and press Enter. Pinpoint Apps Using Lots of Resources Manage Your Startup Programs Use Included Security Programs Modify Power Settings. 20 Windows processes you can kill to make your PC run quicker.

In Windows, all processes are listed in the Task Manager. 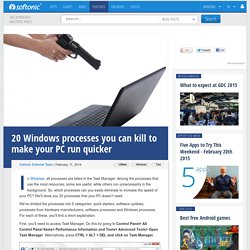 Among the processes that use the most resources, some are useful, while others run unnecessarily in the background. So, which processes can you easily eliminate to increase the speed of your PC? We'll show you 20 processes that your PC doesn't need. We've divided the processes into 5 categories: quick starters, software updates, processes from hardware manufacturers, software processes and Windows processes. For each of these, you'll find a short explanation. First, you'll need to access Task Manager. Then, click on the tab that says Processes. Quickstarter Quickstarters preload parts of a program in case the user wants to open the program later. Reader_sl.exe is a part of Adobe Reader and stands for Adobe Acrobat Speed Launcher. Software-Updates Update managers periodically check whether a new version of the program is available. AdobeARM.exe belongs to Adobe Acrobat and Adobe Reader. NBB - BNB - FrontMotion Firefox. 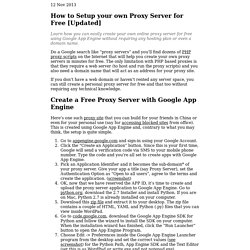 The only limitation with PHP based proxies is that they require a web server (to host and run the proxy scripts) and you also need a domain name that will act as an address for your proxy site. How to Add Menu Items Under the Right-Click or Context Menu.