FFmpeg. This Wiki is intended for all kinds of FFmpeg and multimedia related information. 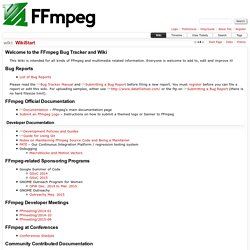 Everyone is welcome to add to, edit and improve it! List of Bug Reports Please read the ​Bug Tracker Manual and ​Submitting a Bug Report before filing a new report. You must register before you can file a report or edit this wiki. For uploading samples, either use ​ or the ftp on ​Submitting a Bug Report (there is no hard filesize limit). Sourcefabric. Schedule stream recordings from the command line, Part 1. 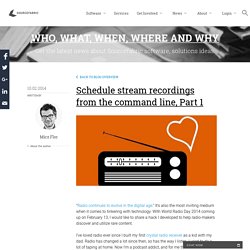 Transmitting FM, AM, SSB, SSTV and FSQ with just a Raspberry Pi. Previously we posted about the Raspberry Pi’s ability to modulate one of its pins to produce FM transmissions with PiFM. A developer (F5OEO) has recently expanded on this idea, and now the Raspberry Pi is capable of modulating and transmitting FM, AM, SSB, SSTV and FSQ signals anywhere between 130 kHz to 750 MHz. To transmit with the Raspberry Pi all you need to do is plug in a wire antenna to Pin 12 (GPIO 18) on the GPIO port and run the PiTx software by piping in an audio file or image for SSTV. Important Disclaimer: While the output power is very small, you should still take great care as the carrier is a square wave, and there is no filtering on the antenna output. So any transmissions will cause harmonics all across the spectrum – possibly interfering with life critical devices. 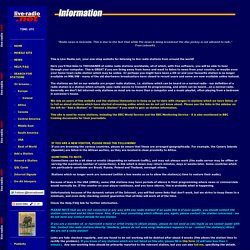 Here you'll find links to THOUSANDS of online radio stations worldwide, all of which, with free software, you will be able to hear through your computer. This is GREAT if you are living away from home and want to listen to news from your country, or maybe even your home town radio station which may be online. Or perhaps you might have been a DX-er and your favourite station is no longer available on MW/SW - many of the old shortwave broadcasters have closed in recent years and some are now available online instead. ChristopheJacquet/PiFmRds. Internet Radio : Part1 - Shoutcast Protocol. NOTE: If you spent the last decade 100miles below the surface of the earth studying the growth of algae under an antarctic glacier, then you will be surprised to learn that we can now listen to radio over the internet. 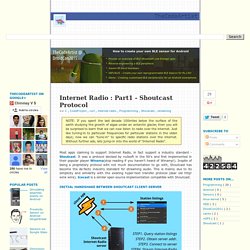 Just like tuning-in to particular frequencies for particular stations in the olden days; now we can "tune-in" to specific radio stations over the internet. Without further ado, lets jump-in into the world of "Internet Radio". Most apps claiming to support Internet Radio, in fact support a industry standard - Shoutcast. It was a protocol devised by nullsoft in the 90's and first implemented in their popular player Winamp(stop reading if you haven't heard of Winamp!).

Inspite of being a proprietary protocol with not much documentation to go with, Shoutcast has become the de-facto industry standard for streaming audio. [STEP1] Station Listing [STEP2] Station Lookup The user can then select one of the stations as desired. [STEP3|4] Station Connection 1. Arduino / Raspberry Pi Internet Radio - 5. Url?sa=t&rct=j&q=&esrc=s&source=web&cd=3&cad=rja&uact=8&ved=0CCwQFjACahUKEwiMsem09LTIAhVH7BQKHYSWB0I&url= Create an Internet Radio FM Transmitter.

One of the real fun uses of RaspberryPi is to use it as a FM transmitter. 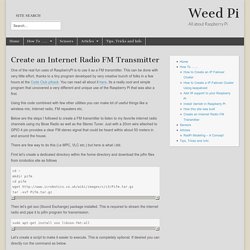 This can be done with very little effort, thanks to a tiny program developed by very creative bunch of folks in a few hours at the Code Club pihack. You can read all about it here. Its a really cool and simple program that uncovered a very different and unique use of the Raspberry Pi that was also a first. Manawyrm/FMBerry. JamesP6000/WsprryPi. Raspberry Pi Ham Radio #1 - WSPR - kielydile. Just a few days ago I bought a Raspberry Pi with nothing but the case and SD card expecting to just have it run as a little SSH server so I could remotely login to my weechat tmux instance, and upload weather data to wunderground from my weather station with weewx. 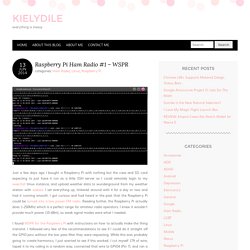 I set everything up, tinkered around with it for a day or two and had it running smooth. I got curious and had heard in the past that the Raspberry Pi could be turned into a low power FM radio. Reading further, the Raspberry Pi actually does 1-250Mhz which is a perfect range for amateur radio operators. I knew it wouldn’t provide much power (10 dBm), so weak signal modes were what I needed. I found WSPR for the Raspberry Pi with instructions on how to actually make the thing transmit. I compiled WsprryPi, gave a look at the arguments, manual, and gave it a shot. . . I left it running for around 10 minutes with no results on 20m, and I had no antenna cut for any other band. Long range ultra low power contact! Raspberry_pi_fm. The pocket-sized single-board Raspberry Pi computer can communicate (speak) through an FM radio. 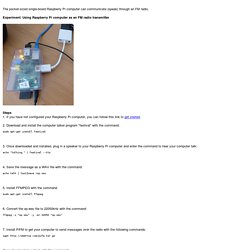 Experiment: Using Raspberry Pi computer as an FM radio transmitter Steps 1. If you have not configured your Raspberry Pi computer, you can follow this link to get started. 2. Download and install the computer talker program "festival" with the command: sudo apt-get install festival 3. Echo "talking. " | festival --tts 4. Echo talk | text2wave >op.wav 5.