Photographic Approach in Architectural Visualisation. 1.3K Flares Facebook 0 Twitter 65 Pin It Share 47 Google+ 72 LinkedIn 30 inShare30 StumbleUpon 1K Reddit 0 1.3K Flares × Lasse Rode did a remarkable job with his previous articles featured on this blog, and this time is no different. 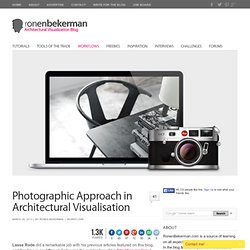 Following the publication of his &tradition renders, I asked Lasse if he can share more of his photographic approach insight to rendering. Although we all seem to compare rendering to photography in the end, I think you’ll learn a thing or two about how to get started with this in mind after reading this article. Enjoy it! Ronen asked me to write an article on the photographic approach in visualization after I published my remakes of the &tradition photos done by Jonas Bjerre-Poulsen (who also is the designer of some of the pieces shown, together with his partner Kasper Rønn at NORM architects, Copenhagen). This is why this article ended up being more about setting up an image in general or the rules of thumb I use most of the time.

Don’t fear it! From Photon to Photograph. Corona Renderer. Making of House in Matsubara - Ken’ichi Otani Architects. Initial comments: while preparing an important model or working on some effect I always collect reference photos for itif I don't have to I don't use shortcuts, it doesn't matter if the rendering takes 2 or 12 hours if the final effect is worth itI have a rule that the quality of rendering depends on good materials, the settings are of secondary importance I prepared a tutorial describing my work on a competition project "House in Matsubara". 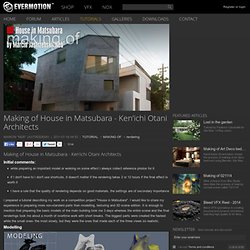 I would like to share my experience in preparing more non-standard parts than modelling, texturing and 3D scene edition. It is enough to mention that preparing the basic models of the main building took me 3 days whereas the entire scene and the final renderings took me about a month of overtime work with short breaks. Making of House in Nada. First of all, I am very pleased that I can present you the workflow that stands behind "House in Nada" / Fujiwarramuro Architects. 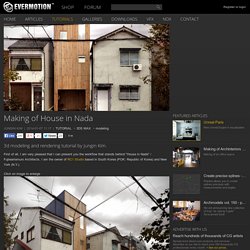 Wall mapping. Ground Map. Light settings - nothing very complicated, but makes the job done. You can see whole gallery here: House in Nada Fujiwarramuro Architects Thank you very much for your reading to the end and you see more materials in our web site. website : RC1-STUDIO.COM. Exclusive: making of a house in Tamatsu. First, I've blocked out the scene using just simple boxes. 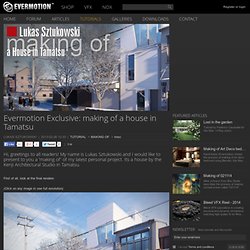 I found a picture showing the surrounding area that helped me with placing the buildings in the right place. After blocking out I begun to set up the camera. The pictures had no exif information so It took a couple of minutes to get the camera match the photograph. Next step was adding details to the buildings. MIR. Octane Render. Octane Render news: New ArchiCAD plugin and version 1.1 out. New ArchiCAD OctaneRender plugin plus version 1.1 Octane Render Standalone app update Octane Render has been one of the more exciting new GPU-based rendering engines out there and the company has done a string of announcements lately with SDK-based plugins for specific applications. 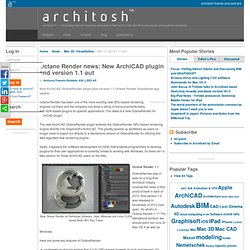 The latest is a new OctaneRender for ArchiCAD plugin. The new ArchiCAD OctaneRender plugin embeds the OctaneRender GPU-based rendering engine directly into Graphisoft’s ArchiCAD. This greatly speeds up workflows as users no longer need to export out directly to a standalone version of OctaneRender for utilizing this well regarded new rendering engine. Sadly, it appears the software development kit (SDK) that enables programmers to develop plugins for their own applications is currently limited to working with Windows. New Octane Render by Refractive Software - Mac, Windows and Linux CUDA -based Multi-GPU Ray Tracer. Octane Render 1.1 OctaneRender was in beta for a long time. ArchiCAD - Maxwell Render V2 Documentation - Next Limit support site. ArchiCAD is an architectural BIM CAD software which offers specialized solutions for handling all common aspects of aesthetics and engineering during the whole design process of the built environment — buildings, interiors, urban areas, etc. 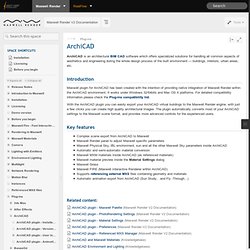 Introduction Maxwell plugin for ArchiCAD has been created with the intention of providing native integration of Maxwell Render within the ArchiCAD environment. It works under Windows 32/64bits and Mac OS X platforms. For detailed compatibility information please check the Plug-ins compatibility list. With the ArchiCAD plugin you can easily export your ArchiCAD virtual buildings to the Maxwell Render engine, with just a few clicks you can create high quality architectural images. Key features. Does anyone know, why archicad and a rendering addon like v-ray do not support eachother?