All About Giant Pandas. Giant Pandas used to range throughout southern and eastern China, Myanmar and north Vietnam. 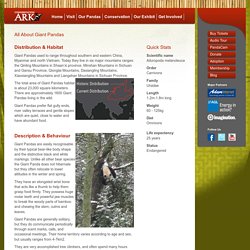 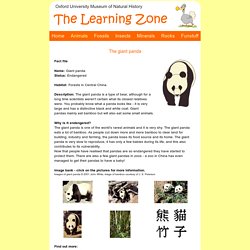 Description: The giant panda is a type of bear, although for a long time scientists weren't certain what its closest relatives were. You probably know what a panda looks like - it is very large and has a distinctive black and white coat. Giant pandas mainly eat bamboo but will also eat some small animals. Why is it endangered? Image bank - click on the pictures for more information. Find out more: Giant panda fact pack Learn more about bears Watch the panda-cam! 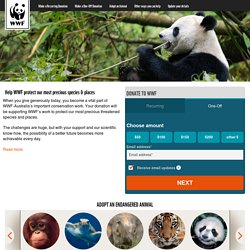 Your donation will be supporting WWF’s work to protect our most precious threatened species and places. The challenges are huge, but with your support and our scientific know-how, the possibility of a better future becomes more achievable every day. Giant pandas habitat destroyed. Wwf for giant pandas. What WWF is doing to protect giant pandas. As a WWF supporter, you can help us continue to build a conservation plan that will protect the giant panda in the face of today’s many threats to its survival. • Only with your help can WWF continue to create and improve ‘panda-friendly’ policies to assist communities, businesses and governments to develop sustainably and protect panda habitats. • Only with your help can we work with communities living on or near panda habitats to find alternative livelihoods that will increase their incomes and make them better stewards of the forests. • And, only with your help will we be able to continue to work with tourism operators to promote low-impact ecotourism into panda nature reserves. 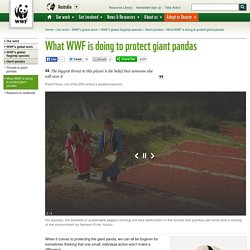 These are some of the only ways to give giant pandas and their habitat long-term protection. And, we can’t do it without your help. 68 Interesting Facts about Pandas. The life span of giant pandas in the wild is approximately 20 years. 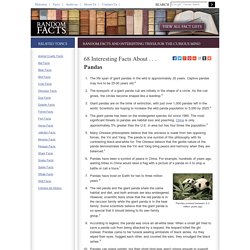 Captive pandas may live to be 25-30 years old.e The eyespots of a giant panda cub are initially in the shape of a circle. As the cub grows, the circles become shaped like a teardrop.b Giant pandas are on the brink of extinction, with just over 1,000 pandas left in the world. Scientists are hoping to increase the wild panda population to 5,000 by 2025.a The giant panda has been on the endangered species list since 1990. The most significant threats to pandas are habitat loss and poaching. China is only approximately 5% greater than the U.S. in area but has four times the population.h Many Chinese philosophers believe that the universe is made from two opposing forces, the Yin and Yang. Giant Panda Facts. Order: CarnivoraFamily: UrsidaeGenus and species:Ailuropoda melanoleuca Geographic Distribution: Giant pandas live in a few mountain ranges in central China, in Sichuan, Shaanxi, and Gansu provinces. 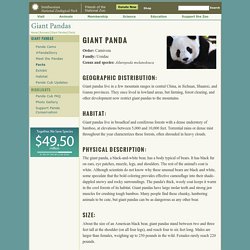 They once lived in lowland areas, but farming, forest clearing, and other development now restrict giant pandas to the mountains. Habitat: Giant pandas live in broadleaf and coniferous forests with a dense understory of bamboo, at elevations between 5,000 and 10,000 feet. Physical Description: The giant panda, a black-and-white bear, has a body typical of bears. Size: About the size of an American black bear, giant pandas stand between two and three feet tall at the shoulder (on all four legs), and reach four to six feet long. Status: The giant panda is listed as endangered in the World Conservation Union's (IUCN's) Red List of Threatened Species. Life Span: Scientists aren't sure how long giant pandas live in the wild, but they are sure it's shorter than lifespans in zoos. Diet: Social Structure: Exploring Nature Educational Resource. Return to the Environmental Issues Index Endangered Species - The Giant Panda Topic Habitat Loss Driving Animals Into Extinction What Causes It The giant panda is a well known (and well loved) species that is being driven to extinction by habitat loss. 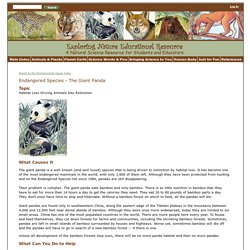 Their problem is complex. Giant pandas are found only in southwestern China, along the eastern edge of the Tibetan plateau in the mountains between 4,000 and 12,000 feet near dense stands of bamboo. Unless all development of the bamboo forests stop soon, there will be no more panda habitat and then no more pandas. What Can You Do to Help Testing and Assessment Assess content comprehension about Topics about Endangered Species with the Mutiple Choice Test.