Ada Valvi is a writer and contributing music news editor at Lyreka. He is lives and raise in Ontario, Canada. I really love to travel and mostly interested in music.

The Lyrics to Confident by Demi Lovato is Layered With Meaning. The Meaning of These Walls by Kendrick Lamar. It seems like every song that Kendrick Lamar puts out there features a strong statement aiming to make you think. 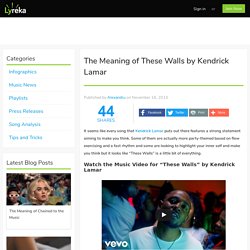 The Hidden Theme of David Guetta’s Bang my Head. David Guetta in “Bang My Head” Music Video via YouTube Released from his sixth studio album Listen November 21st last year comes a remix of “Bang my Head” (on his new album Listen Again) scheduled to be re-released November 27 with a more futuristic vibe that features the vocals of Sia and Fetty Wap. 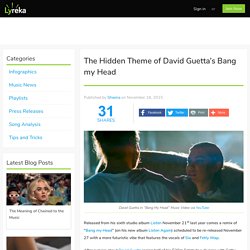 After rumors about David Guetta losing half of his $30m Estate to a divorce with Cathy, wife of 22 years. It looks like the woman beside David in the music video on YouTube represents his courage and Self Trust, that he thought he lost in the process of divorce, until he took the courage to finally go on. David Guetta’s “Bang My Head” Music Video. Logic Tells us to Live Life to its Fullest Until we "Fade Away" Published by Alexandru on November 23, 2015 Logic, the Gaithersburg, Maryland rapper who always has a story to tell now comes with a strong statement for “Fade Away”, his 3rd single off “The Incredible True Story”. 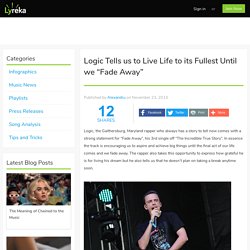 In essence the track is encouraging us to aspire and achieve big things until the final act of our life comes and we fade away. The rapper also takes this opportunity to express how grateful he is for living his dream but he also tells us that he doesn’t plan on taking a break anytime soon. A Larger Meaning in Justin Bieber's "Sorry" Song. A collaboration with Skrillex and Diplo, Justin Bieber’s “Sorry” is the second single released last Friday, from his new album “Purpose” which incorporates the elements of Dancehall and Electronic Dance Music. 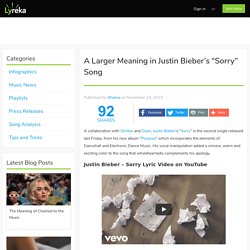 His vocal manipulation added a sincere, warm and exciting color to the song that wholeheartedly complements his apology. Justin Bieber – Sorry Lyric Video on YouTube Justin Bieber has been talking more about how he matured and decides to put his mischiefs behind him at age 21 to focus on his career. Although JB is saying sorry, in an interview last month he stated that he would never take back his personal choices, instead he is saying Sorry because it allows him to tell his own side of the story. Valuable Insight into Writing Songs for the Theatre and More. One of the great things about writing songs for the theatre is that, if the playwright or bookwriter has done their job properly, a major part of the songwriter’s job has already been done before they even set pen to paper. 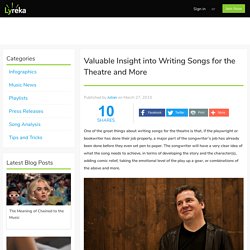 The songwriter will have a very clear idea of what the song needs to achieve, in terms of developing the story and the character(s), adding comic relief, taking the emotional level of the play up a gear, or combinations of the above and more. 33 Songwriting Tips from World Class UK Musicians. Songwriting isn’t always roses and rainbows. 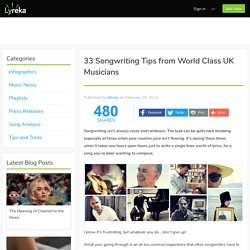 The task can be quite neck breaking especially at times when your creative juice isn’t flowing. Tory Lanez Say it's Not All About the Vanity. Published by Alexandru on December 1, 2015. 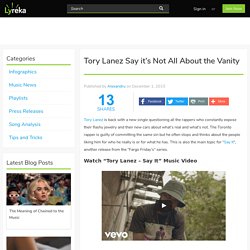 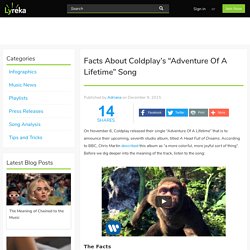 According to BBC, Chris Martin described this album as “a more colorful, more joyful sort of thing”. Before we dig deeper into the meaning of the track, listen to the song: The Facts After being active for more than twenty years, there is a reasonable pressure on the boys to always make something new, good and interesting. The Chainsmokers ‘Closer’ Doesn’t Mean What You Think. The Chainsmoker’s new hit Closer isn’t your average love song. 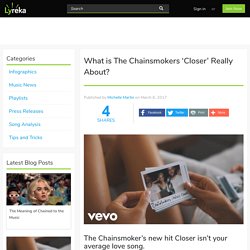 Lead by Alex Pall and Andrew Taggart, the electro-pop duo The Chainsmokers is taking the billboard 100 by storm. ‘Closer’ was their 3rd hit to go double-platinum in 2016, and like the song says– they just can’t stop. Featuring superstar singer-songwriter, Halsey, the hit has quickly risen in the charts as a somewhat dark, but mostly honest love song– or so it seems. The single represents a vapid, wild, and yet somehow endearing millennial experience of love, materialism, and as you may or may not have guessed– getting back together with an ex. The Meaning of Chained to the Music. Katy Perry Takes Us Back to 1984 Katy Perry’s dystopian spin on pop takes us for a whirl in her hit, ‘Chained to the Rhythm’ Little-Miss-Sunshine Katy Perry is taking a turn for the dark side in her song “Chained to the Rhythm”– a huge social critique and one of 2017’s most politically-charged and pop songs. 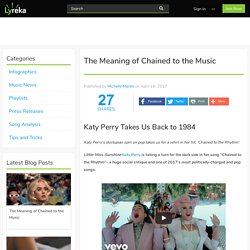 In her latest hit, Perry describes what pretty much sounds like the collapse of society as we know it. 5 Steps to Interpreting Song Lyrics. Many view music as a universal language, as simply placing words and symbols on paper. But in reality, music is an artist’s way to express their feelings and thoughts. Their songs reflect emotions that cannot be articulated any other way. You, however, do not have to be among the masses who listen to songs on a daily basis without understanding their meaning. Songwriting Tips from Popular Artists. Today we’ll share with you some of the best songwriting tips. To help you get started and/or become a better songwriter, we’ve prepared some amazing tips for you from truly talented artists: Sia, Taylor Swift, Lady Gaga, Pharrell Williams, and John Mayer. Songwriting Tips from 11 Expert Songwriters in the UK. The response that we had on our first songwriting round-up from world class UK musicians was quite phenomenal… so much so that we’ve had several artists contacting us asking for more tips from expert musicians.

Of course, since one of our goals here in Lyreka.com is to help artists in any way that we can; we are more than happy to accommodate. Allow us to share with you our next round of expert musicians. Enjoy! Chris Nicolaides – Songwriter, Composer and Producer. Music Streaming Competitive Analysis & Statistics Infographics. Song Meanings and Lyric Interpretations.