6.jpg (JPEG Image, 1000 × 4104 pixels) - Scaled (24%) The Single Best Piece of Marriage Advice Ever Given. Posts. Success implies getting more of the good things in life, which people think of as more money, a larger house, finer things to put in the house, and so on. 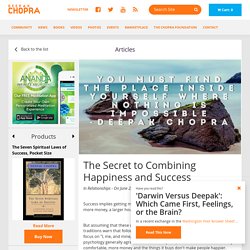 But assuming that these will make you happy is shaky. The world's wisdom traditions warn that following the demands of the ego personality, with its narrow focus on "I, me, and mine," won't lead to happiness. The field of positive psychology generally agrees--after a certain point, once finances are reasonably comfortable, more money and the things it buys don't make people happier. It's no simple matter to combine success and happiness, in fact, but the world's wisdom traditions do offer a strategy. They recommend leading a conscious life. Plenty of driven, ambitious, competitive people devote their prime years to getting ahead, letting happiness more or less take care of itself.

The common link is consciousness itself. Desire is not bad, but there must be a balance between power and governance. Sheryl Sandberg - Today is the end of sheloshim for my... Crafting An Empathy-Driven Approach To Management. Lessons from Late Night. In 1997, I realized one of my childhood dreams. 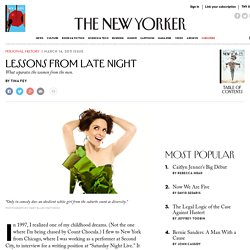 (Not the one where I’m being chased by Count Chocula.) I flew to New York from Chicago, where I was working as a performer at Second City, to interview for a writing position at “Saturday Night Live.” It seemed promising, because I’d heard that the show was looking to diversify. Only in comedy, by the way, does an obedient white girl from the suburbs count as diversity.

The Small, Happy Life. A few weeks ago, I asked readers to send in essays describing their purpose in life and how they found it. 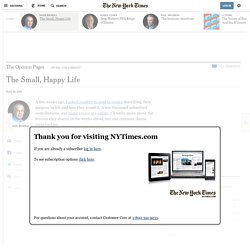 A few thousand submitted contributions, and many essays are online. I’ll write more about the lessons they shared in the weeks ahead, but one common theme surprised me. I expected most contributors would follow the commencement-speech clichés of our high-achieving culture: dream big; set ambitious goals; try to change the world. Sahaj. How Science Helps Us Find the Good. I’ve been covering the science of human goodness, off and on, for almost 10 years. 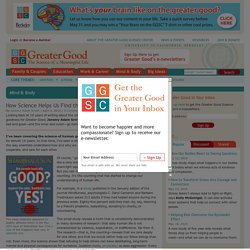 In that time, I’ve seen a dramatic transformation in the way scientists understand how and why we love, thank, empathize, cooperate, and care for each other. Of course, “goodness” doesn’t seem like a very scientific concept. It sounds downright squishy to many people, and thus unworthy of study. But you can count acts of goodness—and all science begins with counting. A Gift, by Denise Levertov. The Mysterious Junction of Suffering and Love. Several years ago, I was a participant in a Christian-Buddhist interfaith conference at Gethsemani monastery in Kentucky. 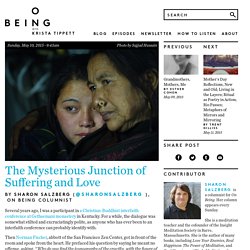 For a while, the dialogue was somewhat stilted and excruciatingly polite, as anyone who has ever been to an interfaith conference can probably identify with. Then Norman Fischer, abbott of the San Francisco Zen Center, got in front of the room and spoke from the heart. The Mindful Manager. Mindful Work: How Meditation Is Changing Business from the Inside Out by David Gelles, Houghton Mifflin Harcourt, 2015 Corporate America and meditation: Until quite recently, those words in the same sentence might have made for a satiric article in the Onion. 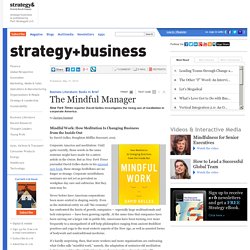 But as New York Times journalist David Gelles charts in his unusual new book, these strange bedfellows are no longer so strange. Corporate mindfulness seminars are not yet as prevalent as workplace day care and cafeterias. But they soon may be. Never before have American corporations been more central in shaping society. It’s hardly surprising, then, that more workers and more organizations are embracing what Gelles calls “mindful work,” namely, the adaptation of centuries-old meditation techniques and breathwork that have been shown to reduce stress, boost health, strengthen immune systems, improve concentration, encourage cooperation, and yes, increase productivity.

Why Companies Are Promoting Mindfulness at the Office - At Work. Meditation - The White Swan - Hamsa Meditation - Stress Anxiety Guide. The History: Long before Hinduism and Buddhism, the wise masters of India practiced and transmitted powerful mantras, of which the Hamsa meditation is said to be the foremost. 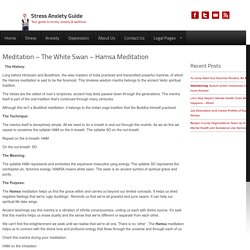 This timeless wisdom mantra belongs to the ancient Vedic spiritual tradition. The Vedas are the oldest of man’s scriptures, ancient holy texts passed down through the generations. The mantra itself is part of the oral tradition that's continued through many centuries. Although this isn't a Buddhist meditation, it belongs to the Indian yoga tradition that the Buddha himself practiced. Chakras: 7 year development life-cycles. Click into the image to see it bigger. 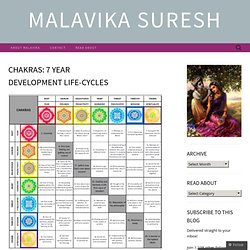 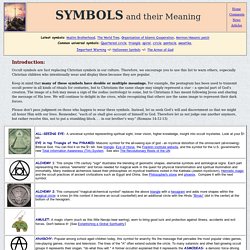 Therefore, we encourage you to use this list to warn others, especially Christian children who intentionally wear and display them because they are popular. Keep in mind that many of these symbols have double or multiple meanings. For example, the pentagram has been used to transmit occult power in all kinds of rituals for centuries, but to Christians the same shape may simply represent a star -- a special part of God's creation.

The image of a fish may mean a sign of the zodiac (astrology) to some, but to Christians it has meant following Jesus and sharing the message of His love. We will continue to delight in the cross, while recognizing that others use the same image to represent their dark forces. "Zen Circles of Illumination" by Belinda Sweet. ZEN ART IS SPIRITUAL art in its purest sense. 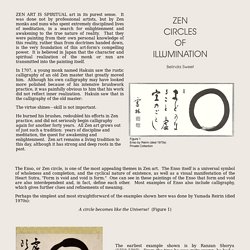 It was done not by professional artists, but by Zen monks and nuns who spent extremely disciplined lives of meditation, in a search for enlightenment and awakening to the true nature of reality. That they were painting from their own personal knowledge of this reality, rather than from doctrines handed down, is the very foundation of this art-form's compelling power. Oh, Sariputra, Form Does Not Differ From the Void, and the Void Does Not Differ From Form. Form is Void and Void is Form; the Same is True For Feelings, Perceptions, Volitions and Consciousness. In this part of The Heart Sutra, the Buddha expounds the luminous Dharma of the Middle Way, or ìWhen coursing in the deep Prajna Paramita,î so that the saints of three kinds will have the occasion to relinquish their less-than-perfect views. Molefi Kete Asante: Why Afrocentricity? The Stone is a forum for contemporary philosophers and other thinkers on issues both timely and timeless.

This is the 11th in a series of interviews with philosophers on race that I am conducting for The Stone. This week’s conversation is with Molefi Kete Asante, a professor of African-American studies at Temple University, known for his pioneering work in the area of Afrocentricity. The Meriwether Group. Don’t Overthink It. Matthew B. Center for Courage & RenewalCenter for Courage & Renewal. Self Transformation, Social Transformation. Although Western Buddhism has typically focused on the individual, socially engaged Buddhism has been growing in popularity. One of its leading exponents, the Vietnamese Zen Buddhist teacher Thich Nhat Hanh, here leads a walking meditation in Paris, October 2006.

Photo FLICKRCC/PIXIDUC. Loy-Why-Buddhism-final.pdf. Vipassana Meditation ~ An Introduction by S. N. Goenka. Vipassana Meditation ~ An Introduction by S. N. Goenka. David Loy - Zen Teacher, Author, Workshop Leader. Indra's Postmodern Net. Indra's Postmodern Net By David Loy Philosophy East and West Vol. 43, No. 3 (July 1993) pp. 481-510 Copyright 1993 by University of Hawaii Press Hawaii, USA What we mean by the sutras is the entire universe itself, mountains and rivers and the great earth, plants and trees.... The secret of empathy. “American Sniper’s” twisted empathy: Chris Kyle, our police forces, and the kill ratio America gets wrong. Speaking a second language may change how you see the world. Weekly Wisdom. ‘A Call From Selma’ Continue reading the main story Video. Ellen Langer on the Value of Mindfulness in Business.

Serbia: Fake Revolutions, Real Struggles. Naming the Wanting Mind. A Shared Purpose Drives Collaboration. Imagine coming back home from work, calling the family into the living room, and urging everyone to collaborate more. The World in 2030 - Susan B. Glasser - POLITICO Magazine. Revolution: Two Minimal Conditions, Bryan Caplan. How to Topple a Dictator (Peacefully) Revolution U. Thinking in Systems: A Primer. WHERE GOOD IDEAS COME FROM by Steven Johnson.

18 Things Highly Creative People Do Differently, by Carolyn Gregoire. Weekly Wisdom. Nine Things Educators Need to Know About the Brain, by Louis Cozolino. The Difference Between Education and Training, by Rachel Naomi Remen. How to Handle Difficult Conversations at Work. What Unilever shares with Google and Apple. To Fall in Love With Anyone, Do This. Mindfulness Can Literally Change Your Brain. The Problem With Meaning. Where Does Moral Courage Come From? For Creative Problem-Solving, Why Young Kids Can Outwit College Students. Why Are Some Cultures More Individualistic Than Others?

The Core Incompetencies of the Corporation - Gary Hamel. In the Company of Givers and Takers. Stop Calling People Out - Jeff Giesea. What if Age Is Nothing but a Mind-Set? Article_3.pdf. Seven things to consider when preparing your book proposal. Design Thinking – Reflective Essay. The Benefits of 'Binocularity' All about Empathy: Quotes on Compassion. Anthony de Mello. Can Mindful Managers Make Happier Employees? Who is Happiest? 6 Ways Being Mindful Can Make You a Better Leader, by Bruna Martinuzzi. The Marshmallow Test for Grownups - Ed Batista.

Order vs. Disorder, Part 3. Seeds of Peace. A Framework for Integrative Thinking about Complex Problems. The CEO of Williams-Sonoma on Blending Instinct with Analysis. Leadership Is a Conversation. Work + Home + Community + Self. New Rules for the New Economy. Out of Control - ooc-mf.pdf. Out of Control: The New Biology of Machines, Social Systems and the Economic World.