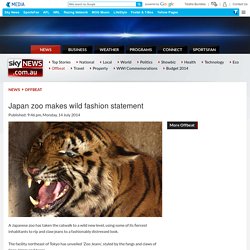 The facility northeast of Tokyo has unveiled 'Zoo Jeans', styled by the fangs and claws of lions, tigers and bears. Zoo officials said the material held up well, all things considered. 'We wrapped several pieces of denim around tyres and other toys. Once they were thrown into the enclosures, the animals jumped on them,' said zoo director Nobutaka Namae, adding that the pieces were later patched together to create the finished product.

Sustainable material pioneers: what does the future hold? What’s wrong with the materials I’m wearing now? 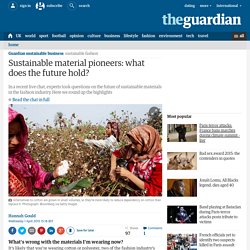 It’s likely that you’re wearing cotton or polyester, two of the fashion industry’s most popular fibres. Cotton depends on large amounts of water to grow, and polyester depends on now-declining reserves of oil and gas. The idea behind sustainable materials is that they are less damaging to the environment to produce, consuming fewer natural resources and creating less pollution. Nature and Calm: Studies That Back Up The Idea. Sep 29, 2015 01:46 PM EDT As we've reported, there is no questioning the fact that stepping outside for fresh air brings fresh perspective and that taking a stroll on the beach causes a sense of serenity. 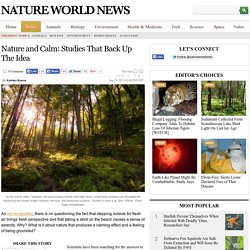 Why? What is it about nature that produces a calming effect and a feeling of being grounded? Scientists have been searching for the answers to these questions for years and a multitude of studies have been conducted in an attempt to uncover a scientific explanation. Stanford University scientists believed that being surrounded by nature reduces pessimistic rumination by providing a pleasant distraction from being lost in whirling negative thoughts. The participants who went on a nature walk reportedly had less activity in their subgenual prefrontal cortices, the area of the brain that controls negative feelings, and the half who walked down an urban four-lane road had no improvement in brain activity. 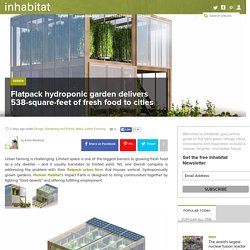 Limited space is one of the biggest barriers to growing fresh food as a city dweller – and it usually translates to limited yield. Yet, one Danish company is addressing the problem with their flatpack urban farm that houses vertical, hydroponically grown gardens. Human Habitat’s Impact Farm is designed to bring communities together by fighting “food deserts” and offering fulfilling employment. With a production area of just 538 square feet, the Impact Farm can easily squeeze into tight, urban spaces. Dutch design only presents sustainably woven bamboo chair. Are man-made gems the key to a sustainable diamond trade? Long a staple of the industrial diamond industry, laboratory-created diamonds only represent about 2% of the jewelry market. 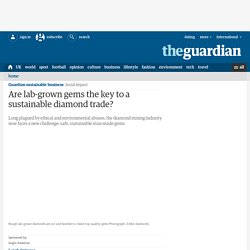 Increasingly, however, they are becoming a force to be reckoned with: some producers have achieved "type IIa" quality, the purest form produced in nature. Kim Kardashian poses next to rusty tractor as more snaps from THAT photo shoot. By Zoe Nauman For Dailymail.com Published: 15:08 GMT, 10 July 2015 | Updated: 17:04 GMT, 10 July 2015 Kim Kardashian has clearly become a fan of the great outdoors thanks to her latest photo shoot. 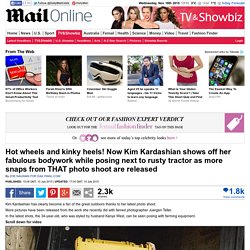 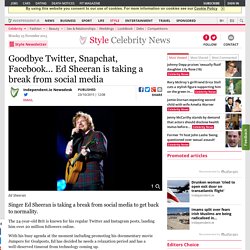 The 24-year-old Brit is known for his regular Twitter and Instagram posts, landing him over 20 million followers online. With his busy agenda at the moment including promoting his documentary movie Jumpers for Goalposts, Ed has decided he needs a relaxation period and has a well-deserved timeout from technology coming up. “I’ll put a post out saying, ‘I’m with friends and family - if you love me you’ll allow me to disappear for a few months and I’ll speak to you in a bit,'" he told Britain's The Sun newspaper. “I think a break for me is coming off my phone, social media and emails.

"I am constantly on my phone, texting, replying to emails, on Twitter, on Snapchat, on Facebook. How 'smart fashion' could transform the mobile workforce. The future of wearables could be in 'smart clothes' that blend fashion with tech Picture this: A customer service representative is helping an irate customer on the phone and becoming flustered and frustrated. 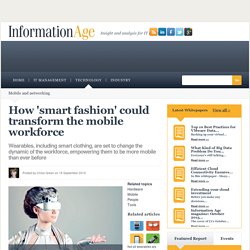 Rather than hearing about the incident after the interaction has escalated, customer service managers are able to step in and offer assistance because they have access to the rep’s vital signs and health signals. Or, imagine one of your fleet drivers becoming tired and falling asleep at the wheel and a fleet manager having the ability to talk him through getting to a rest area safely, thanks to having access to his health signals. Essena O'Neill quits Instagram claiming social media 'is not real life'.