10 Most Powerful Luxury Fashion Brands In The World. The luxury market has been growing significantly over the past couple of years and is still continuing on an upwards trend. 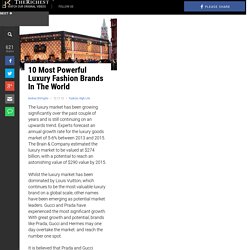 Experts forecast an annual growth rate for the luxury goods market of 5-6% between 2013 and 2015. The Brain & Company estimated the luxury market to be valued at $274 billion, with a potential to reach an astonishing value of $290 value by 2015. Whilst the luxury market has been dominated by Louis Vuitton, which continues to be the most valuable luxury brand on a global scale, other names have been emerging as potential market leaders. Gucci and Prada have experienced the most significant growth. With great growth and potential, brands like Prada, Gucci and Hermes may one day overtake the market. and reach the number one spot. It is believed that Prada and Gucci experienced such high growth in brand value due to an increase in Asian customers, at home and abroad.

No Growth but No Panic in the Luxury Sector. LONDON, United Kingdom — Both the Savigny Luxury index (SLI) and the MSCI World Index (MSCI) ended up flat this month, with the SLI posting a small gain whilst the MSCI tipped slightly into negative territory. 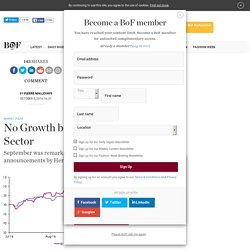 Luxury Brand Retailers Face Strong Headwinds (RL) Macy’s announcement last Thursday that it plans to close another 100 stores is just the latest example of the misery felt by large retailers. 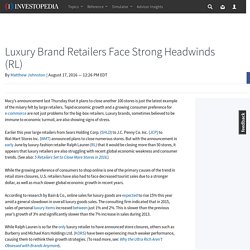 Tepid economic growth and a growing consumer preference for e-commerce are not just problems for the big-box retailers. Luxury brands, sometimes believed to be immune to economic turmoil, are also showing signs of stress. Earlier this year large retailers from Sears Holding Corp. (SHLD) to J.C. Penny Co. While the growing preference of consumers to shop online is one of the primary causes of the trend in retail store closures, U.S. retailers have also had to face decreased tourist sales due to a stronger dollar, as well as much slower global economic growth in recent years. According to research by Bain & Co., online sales for luxury goods are expected to rise 15% this year amid a general slowdown in overall luxury goods sales. Luxury Brands Say Enough Is Enough; Cut Back On Deals, Distribution 08/11/2016. Who needs a pricey handbag if just about anybody can afford it? 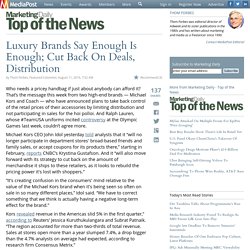 That’s the message this week from two high-end brands — Michael Kors and Coach — who have announced plans to take back control of the retail prices of their accessories by limiting distribution and not participating in sales for the hoi polloi. And Ralph Lauren, whose #TeamUSA uniforms incited controversy at the Olympic Games last week, couldn’t agree more. 2016 Year in Preview: Fast fashion slips into high gear (and hits a few speed bumps) Download Digiday’s full 2016 Year in Preview PDF here. 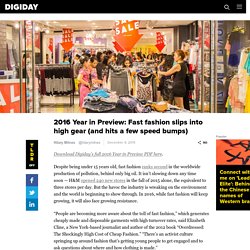 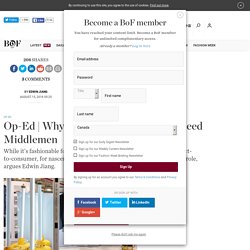 In the telling of their success stories, these middlemen are often painted as meddling intermediaries, taking an unreasonably high margin that serves neither brand nor consumer. But despite the undeniable achievements of companies like Warby Parker and Everlane, there is definite value in the presence of middlemen. As argued recently by Richie Siegel, third-party retail distributors can offer clear business benefits by taking on the task of merchandising and selling product, enabling brands to focus on design. But when it comes to the luxury fashion market, middlemen also play a more fundamental role that is essential to the earliest stages of luxury brand building. Luxury Institute's Seven Trends Shaping Luxury in 2015. NEW YORK, NY--(Marketwired - Nov 11, 2014) - The following is a White paper by Milton Pedraza, CEO of Luxury Institute, LLC: All around the globe, the luxury industry has navigated against strong headwinds in 2014. 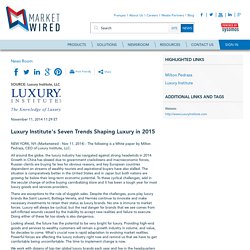 Growth in China has slowed due to government crackdowns and macroeconomic forces, Russian clients are buying far less for obvious reasons, and key European countries dependent on streams of wealthy tourists and aspirational buyers have also stalled. The situation is comparatively better in the United States and in Japan but both nations are growing far below their long-term economic potential.

Michael Kors. The Demise of the Department Store (SHLD, M, JCP) The era of large department stores may be coming to a close. 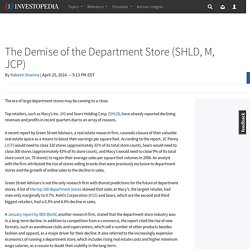 Top retailers, such as Macy’s Inc. (M) and Sears Holding Corp. (SHLD), have already reported declining revenues and profits in recent quarters due to an array of reasons. A recent report by Green Street Advisors, a real estate research firm, counsels closure of their valuable real estate space as a means to boost their earnings per square foot. According to the report, JC Penny (JCP) would need to close 320 stores (approximately 31% of its total store count), Sears would need to close 300 stores (approximately 43% of its store count), and Macy’s would need to close 9% of its total store count (or, 70 stores) to regain their average sales per square foot volumes in 2006. Green Street Advisors is not the only research firm with dismal predictions for the future of department stores. A January report by IBIS World, another research firm, stated that the department store industry was in a long-term decline.

Opinion: Consumers have transformed the catwalk into a real-time runway.