Zara Is the Latest Fast Fashion Retailer to Launch an Eco-Friendly Line. Zara’s owner Amancio Ortega is the second richest man in the world, according to Forbes, with a $67 billion dollar net worth. 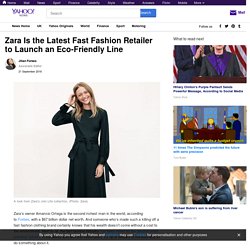 And someone who’s made such a killing off a fast fashion clothing brand certainly knows that his wealth doesn’t come without a cost to the environment. Brexit barometer: Leave vote hits the high street - FT.com. Premium Digital All the benefits of a standard Digital Subscription plus: Unlimited access to all content Instant Insights column for comment and analysis as news unfolds FT Confidential Research - in-depth China and Southeast Asia analysis ePaper - the digital replica of the printed newspaper Full access to LEX - our agenda setting daily commentary Exclusive emails, including a weekly email from our Editor, Lionel Barber Full access to EM Squared- news and analysis service on emerging markets Brexit Briefing - Your essential guide to the impact of the UK-EU split Standard Digital Access to FT award winning news on desktop, mobile and tablet Personalised email briefings by industry, journalist or sector Portfolio tools to help manage your investments FastFT - market-moving news and views, 24 hours a day Brexit Briefing - Your essential guide to the impact of the UK-EU split Digital Trial For 4 weeks receive unlimited Premium digital access to the FT's trusted, award-winning business news None. 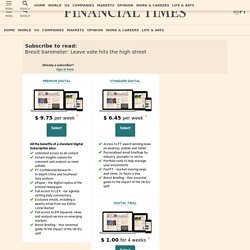 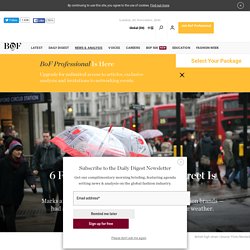 Next, the UK’s second-largest clothing retailer, also fell short: full-price sales grew a meagre 0.4 percent for the two months ending 24 December, missing estimates by more than 5 percent. Both blamed the UK’s unusually mild winter, which stalled demand for seasonal clothing (M&S, in particular, has high shares in winter categories like knitwear and coats). But this excuse has its limits. Some retailers successfully navigated the weather: Bernadette Kissane, apparel and footwear analyst at Euromonitor, points out that Debenhams “reacted to lessons learned” from 2014’s unusually warm Autumn, and limited its orders of winter stock, avoiding unsold merchandise and heavy discounting.

Asos to reap Brexit benefits after fall in pound. Asos expects to benefit from the fall in the pound’s value after the UK voted to leave the EU because sterling’s slide has made its clothes cheaper for US and European customers. 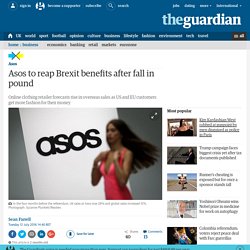 The online fashion retailer said that because more than half of its sales come from outside the UK it is protected against a downturn in demand from British consumers. The Guardian view on Marks & Spencer: challenge of the demand for choice. Older women a growing opportunity in UK womenswear. Mature women aged over 55 present significant opportunities for the UK womenswear sector given their higher disposable income and preference for style and quality over low prices, analysts believe. 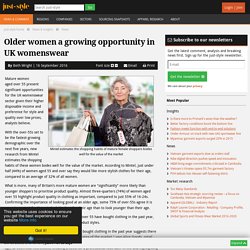 With the over-55s set to be the fastest-growing demographic over the next five years, new research from Mintel estimates the shopping habits of these women bodes well for the value of the market. According to Mintel, just under half (44%) of women aged 55 and over say they would like more stylish clothes for their age, compared to an average of 32% of all women. What is more, many of Britain's more mature women are "significantly" more likely than younger shoppers to prioritise product quality. Almost three-quarters (74%) of women aged over 55 highlight product quality in clothing as important, compared to just 55% of 16-24s. Overall, the vast majority (89%) of women aged over 55 have bought clothing in the past year, and 41% have bought three or four different product styles.

Fashionunited. How Instagram's New Feed Will Impact Brands and Influencers. LONDON, United Kingdom — Back in March, Instagram announced that “in the coming months” it would implement an algorithm that, instead of ordering posts in users’ feeds in reverse-chronological order, will order them based on "the likelihood you’ll be interested in the content," using signals such as likes, comments and searches. 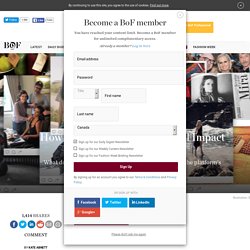 Instagram says that users miss on average 70 percent of their feeds, so the change will ensure they see the content that matters to them. The company also tried to reassure its 400 million users that they would be told when the feed was rolled out and that at least initially, no posts will be removed from feeds — they will just be shown in a different order. Still, the announcement caused Insta-chaos. So, what are the influencers worried about? For many influencers, Instagram has become a valuable revenue stream. Karen Robinovitz, chief creative officer at Digital Brand Architects, says there is “potential” for the changes to affect influencer reach. 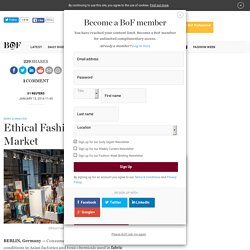 The collapse of an eight-storey garment factory in Bangladesh last April that killed more than 1,100 people drew global attention to the perilous conditions endured by many workers in Asia's garment industry, which supplies big Western retailers. Since then, labor unrest over working conditions has plagued the sector in Bangladesh and Cambodia. The fashion industry has also been the target of vocal campaigns from environmental groups like Greenpeace.

They have piled pressure on global brands to stop using chemicals which they say can pollute rivers near factories and threaten the health of workers and consumers. "It shows how important the topic is among consumers. Mintel said ethical and environmental concerns are strongest in southern Europe. Supply Chain. Exit from Chinese online store costs Asos £10m. Fashion website Asos is closing its local operations in China at a cost of £10m, less than three years after it launched. 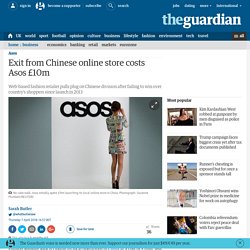