Deep, Moody Hues Dominated the Red Carpet at the 2016 Governors Awards. Late fall — and the deep, moody color palette that accompanies it — was in full swing at the Academy of Motion Picture Arts and Sciences' 8th Annual Governors Awards in Hollywood on Saturday evening. 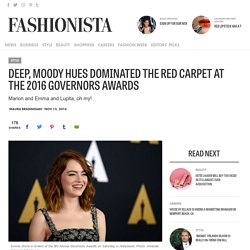 It's rare for so many bona-fide movie stars to arrive en masse, all wearing varying shades of blacks, blues and silvers, which we saw on famouses like Emma Stone, Marion Cotillard, Ruth Negga, Michelle Williams, Nicole Kidman and Gugu Mbatha-Raw. Meanwhile, others — take Lupita Nyong'o, Hailee Steinfeld and Lily Collins — kept it light in airy mint lace, floaty whites and a slinky chartreuse silk that was worth a best-dressed nomination on its own. Click through the gallery below to see 15 of the very best red carpet looks from Saturday night's 2016 Governors Awards. Estee Lauder to Acquire Too Faced. The Estée Lauder Companies will acquire Too Faced, it announced in a statement on Monday evening. 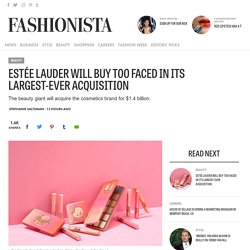 The makeup line, best known for its playful scents, innovative formulas, carefully honed branding and massive social media following, launched in 1998. It has continued to build a loyal following in the years since and has become a favorite amongst many beauty bloggers and influencers (no doubt one reason it was an attractive acquisition for Estée Lauder). Etsée Lauder CEO Fabrizio Freda released a statement elaborating on the acquisition: "Too Faced is one of the most dynamic makeup brands in the world.

It has tremendous growth momentum in specialty-multi and online – important, strategic and fast-growing channels. Shortly after the news was made public, Too Faced co-founders Jerrod Blandino and Jeremy Johnson posted a video to the brand's Instagram feed: Puma Sees Improving Sell-Through With Its Successful Trifecta of Female Ambassadors. It's been a good year so far for Puma. 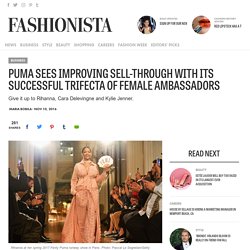 The German sportswear brand reported on Thursday that over the past nine months, it as seen a 10.2 percent increase in revenue across all regions — especially in Europe, which saw double-digit growth — and product categories. Among them, footwear improved by 11 percent while apparel contributed the highest growth rate, up 12 percent to €966.6 million, or about $1.05 billion, in sales.

(Gross profit margins, however, experienced a slight decrease due to the strong U.S. dollar: 46.1 percent compared to the first nine months of last year with 46.4 percent.) In the company's third quarter specifically, sales jumped by 8.3 percent to €990.2 million (about $1.1 billion) driven, as usual, by footwear, where sales rose 12.3 percent.

Bjørn Gulden, Chief Executive Officer of PUMA SE, thanks Usain Bolt's "unbelievable performance," which won him three gold medals at the Rio 2016 Olympics in August. The History of Women and Their Eyebrows. Getty Images Advertisement - Continue Reading Below 1. 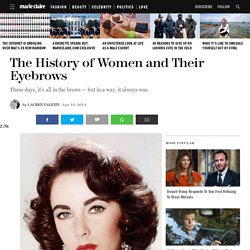 The Ancient Egyptian Eyebrows of Horus, 3500 B.C. - 2500 B.C. Both Egyptian men and women wore makeup for its supernatural powers. As an homage to the God Horus, heavily-lined eyes were the focal point of the face, which meant that eyebrows needed to be equally as prominent. How brows became the beauty obsession of the decade. Jared Bailey is the “global brow expert” for Benefit Cosmetics. 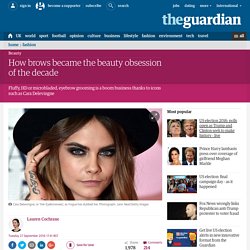 He travels to about 40 countries every year, talking brows with women. According to Bailey, they like them dramatic in the Middle East, straighter in Korea and with a “soft, fluid look” in his native America. Even his email signature is brow-themed. “Don’t Let Anyone With Bad Brows Tell You Sh*t About Your Life,” it reads. Bailey isn’t a beauty-industry oddity – Benefit is a global brand, owned by luxury behemoth LVMH, with more than 1,400 stores, and its retro-packaged products are sold in 45 countries.

New brow advances include eyebrow transplants and microblading, a kind of tattooing where tiny strokes of ink are added to resemble hairs, a treatment that lasts up to three years. Eyebrows have a corresponding new visibility in popular culture. In 2016, we are at what is sometimes called the hinge of the decade, the moment where the look of the 10s (or whatever they are called) is being solidified. Mila Kunis rails against Hollywood sexism: 'insulted, sidelined, paid less' The actor Mila Kunis has said a film producer threatened to end her career after she refused to pose half-naked for a men’s magazine. 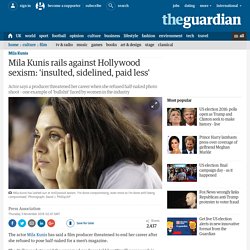 The Hollywood star said the unnamed producer told her “You’ll never work in this town again” when she declined to take part in the photo shoot for a movie being promoted. In an open letter published on A Plus, a website co-founded by her husband, Ashton Kutcher, Kunis said she was “livid” and felt “objectified” following the incident and voiced concerns about gender inequality in the workplace. She wrote: “Throughout my career there have been moments when I have been insulted, sidelined, paid less, creatively ignored and otherwise diminished based on my gender. “I taught myself that to succeed as a woman in this industry I had to play by the rules of the boys’ club.

But the older I got and the longer I worked in this industry, the more I realised that it’s bullshit! “It ignored my (and my team’s) significant creative and logistical contributions.