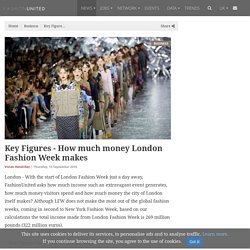 Interested to see which events, shows and more you shouldn't miss during LFW? Economy Of Fashion: How Different Trends Reflect The Financial State. It's common knowledge fashion is cyclical in nature.

The concept of “newness” in fashion doesn't refer to the premiere of a trend, but rather its revival. Why fashion cycles in this manner, however, is less obvious. There are lots of factors at play: cultural trends, politics, celebrity influence. One one of the most surprising factors to influence the cycle of fashion, though, is the state of the global economy. If you think about it, it makes sense. During tougher times, if you need new clothes, the focus is less on passing fads and more on classic, quality pieces worth the expenditure because they’ll last (which also aids in cutting down cost per wear).

As FIT professor John Mincarelli tells ABC News, “In rough economic times, people shop for replacement clothes,” adding “basics” prevail during an economic downturn. Economist George Taylor was the first to notice the correlation between fashion and the economy; he developed the “Hemline Theory” to describe his findings. Pinterest. UK fashion industry statistics. Primark blames the weather for falling sales. Image copyright Getty Images A warm winter and a cold spring has been blamed for a fall in sales at low-cost fashion retailer Primark. 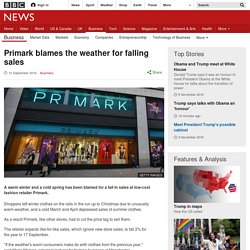 Shoppers left winter clothes on the rails in the run up to Christmas due to unusually warm weather, and a cold March and April depressed sales of summer clothes. As a result Primark, like other stores, had to cut the price tag to sell them. The retailer expects like-for-like sales, which ignore new-store sales, to fall 2% for the year to 17 September. "If the weather's warm consumers make do with clothes from the previous year," said Maria Malone, principal lecturer for fashion business at Manchester Metropolitan University. For retailers like Primark that causes a problem as they source their clothes from the Far East and South Asia and cannot adjust their stock to reflect the weather conditions.

"Once stock is on its way you can't turn the ships around," points out Ms Malone. Pound impact Pension deficit. Can Britain survive economically post-Brexit? Japan's economic growth weaker than forecast. Image copyright Getty Images Japan's economy grew at a weaker-than-expected rate in the second quarter despite an aggressive spending policy by the government. 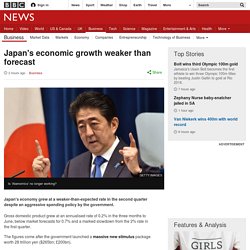 Gross domestic product grew at an annualised rate of 0.2% in the three months to June, below market forecasts for 0.7% and a marked slowdown from the 2% rate in the first quarter. The figures come after the government launched a massive new stimulus package worth 28 trillion yen ($265bn; £200bn). Japanese stocks fell after the data.