What President Trump means for retailers. How will the Trump victory impact other industries? 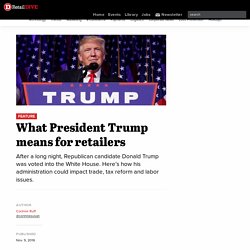 Here's what we know about the President-elect. After a long election night that defied many pollsters' predictions, Donald J. Brexit is a disaster for British fashion. Hadley, you’ve written on Brexit elsewhere in the paper, but not in your style column. Why is that? Robert, by email You’re right, Robert! I have stayed away from Brexit in this column because that would mean looking at what it means for the fashion industry, and the answer to that is, well, no one knows. Confusion over Brexit, how strange – don’t see that in any other industry, do you? David Bowie exhibition breaks V&A record. A retrospective exhibition of the life and work of David Bowie has become the most visited show in the V&A's history. 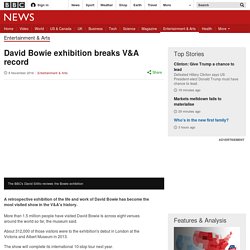 More than 1.5 million people have visited David Bowie Is across eight venues around the world so far, the museum said. About 312,000 of those visitors were to the exhibition's debut in London at the Victoria and Albert Museum in 2013. The show will complete its international 10-stop tour next year. WMO: Five hottest years on record have occurred since 2011. Image copyright WMO New data released by the World Meteorological Organisation (WMO) shows that the five years from 2011 to 2015 were the warmest on record. 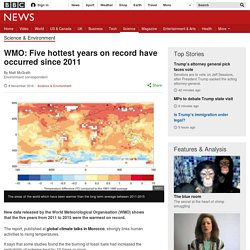 The report, published at global climate talks in Morocco, strongly links human activities to rising temperatures. It says that some studies found the the burning of fossil fuels had increased the probability of extreme heat by 10 times or more. The authors say that 2016 will likely break the record for warmest year. Could reinvention solve our shopping addiction? Image copyright EpicStockMedia, Thinkstock Swedish retail giant H&M seems an unlikely poster child for ecological living. 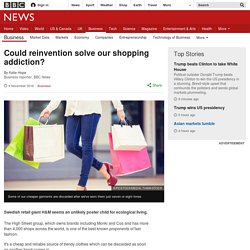 The High Street group, which owns brands including Monki and Cos and has more than 4,000 shops across the world, is one of the best known proponents of fast fashion. It's a cheap and reliable source of trendy clothes which can be discarded as soon as another trend comes in. Yet it has pledged to become "100% circular", ultimately using only recycled or other sustainable materials to make its clothes. It's a journey that more fashion firms are beginning to take, with the so-called "circular economy" - which eliminates waste by turning it into something valuable - being seen as a possible solution to the vast amount of clothes that end up in landfill.