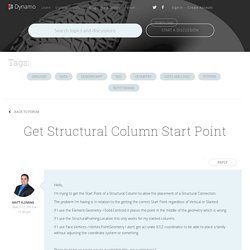 Once you split up the files (and simplify the non-transaction solution a bit), we get the following times for an empty (columns only) file: Python(empty): Dynamo (empty): In this limited test, the transaction method is indeed faster by a few miliseconds. Custom Node with Variable Inputs/Outputs - Python - Dynamo. The Dynamo Primer. RGB Transform. Red for the X axis, green for the Y axis and blue for the Z axis.

Like many other software with 3D environments, Dynamo uses the known order of basic colors to help to differentiate the axes of the coordinate systems. In my previous post “Intersecting rails”, it was implicit the potential of Dynamo to automatically replicate and reposition profiles. This is a previous step when making multiple elements at once via sweep or loft. This post goes into the details about how to achieve this and some practical related issues. Copy + align + ……. = Transform Geometry.Transform is one of the core methods of Dynamo. One habitual use of transform is combined with the methods that return coordinate systems (C.S.) aligned with curves and surfaces. The default axis configuration maybe is not going to match directly what we need.

What Revit Wants: Convert Revit Topography into Massing Forms. Have you ever wanted to rationalise your Topography as a Massing form, perhaps so you could use Divided Surface and panelization tools on the topo? 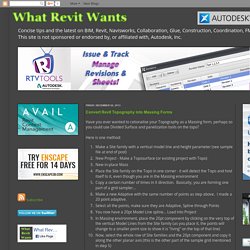 Here is one method: Make a Site family with a vertical model line and height parameter (see sample file at end of post)New Project - Make a Toposurface (or existing project with Topo)New in-place MassPlace the Site family on the Topo in one corner - it will detect the Topo and host itself to it, even though you are in the Massing environmentCopy a certain number of times in X direction.

Basically, you are forming one part of a grid sampler...Make a new Adaptive with the same number of points as step above. I made a 20 point adaptive.Select all the points, make sure they are Adaptive, Spline through PointsYou now have a 20pt Model Line spline... Dynamo BIM. Unit1: Introduction In this lesson we will introduce the building mass for the course, demonstrate its parametric flexibility, and explain the geometric applications of its parameters. 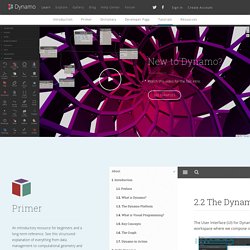 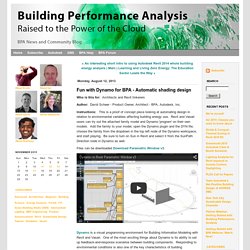 Instructions: This is a proof of concept piece looking at automating design in relation to environmental variables affecting building energy use. Revit and Vasari users can try out the attached family model and Dynamo 'program' on their own models. Add the family to your model, open the Dynamo plugin and the DYN file, choose the family from the dropdown in the top left node of the Dynamo workspace, and start playing. Geometry 101. Dynamo’s new geometry library, as of the 0.7 branch, vastly expands your capability to model complex forms both in Dynamo and in any platform it touches. 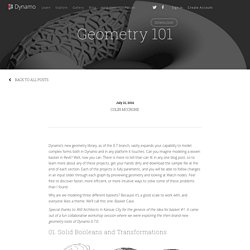 Can you imagine modeling a woven basket in Revit? Well, now you can. There is more to tell than can fit in any one blog post, so to learn more about any of these projects, get your hands dirty and download the sample file at the end of each section. Each of the projects is fully parametric, and you will be able to follow changes in an input slider through each graph by previewing geometry and looking at Watch nodes. Feel free to discover faster, more efficient, or more intuitive ways to solve some of these problems than I found. Why are we modeling three different baskets? Special thanks to 360 Architects in Kansas City for the genesis of the idea for basket #1. 01. This complexity of this “basket,” if you can call it that, lies in rotational transformations of rings. Download the file: Basket1.dyn. 02. Sunlight Hours Analysis in Dynamo. Image management with Dynamo. This functionality has been requested a few times on Dynamo blog, so I thought I will make it official and share it here for everyone. 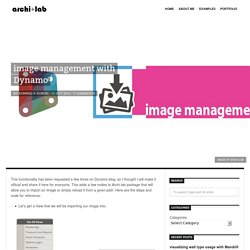 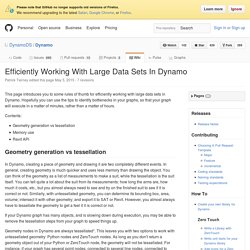 Hopefully you can use the tips to identify bottlenecks in your graphs, so that your graph will execute in a matter of minutes, rather than a matter of hours. Contents: Geometry generation vs tessellationMemory useRevit API Geometry generation vs tessellation In Dynamo, creating a piece of geometry and drawing it are two completely different events. If your Dynamo graph has many objects, and is slowing down during execution, you may be able to remove the tessellation steps from your graph to speed things up. Congratulations to our AU 2014 Dynamo Hackathon winner: “Acoustamo: Designed by Sound” Last month we asked you to vote for your favorite entry from our first annual AU Dynamo Hackathon. 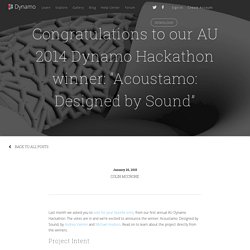 The votes are in and we’re excited to announce the winner: Acoustamo: Designed by Sound, by Andrea Vannini and Michael Hudson. Read on to learn about the project directly from the winners. Michael Hudson (@MikeHudsonArchi) Topic: Pulling data from sublists. The Dynamo Primer. Lists of Lists Let's add one more tier to the hierarchy. 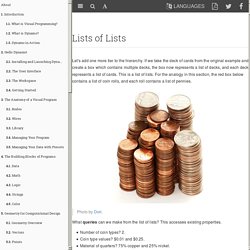 ClockworkForDynamo/Point.RoundUpToPrecision.dyf at master · andydandy74/ClockworkForDynamo. DynamoUnfold. Unfolding Planar-Faced Models For the last few months I have been working on an intern project at Autodesk for the Dynamo team on the unfolding of planar-faced Breps, solids, and sets of surfaces. Initially, I started working in Dynamo and Python but decided to switch to C# and zero touch import. Zero touch is a way to create reusable nodes in Dynamo from C# code with minimal Dynamo-only code. I have found this way of working, using C# and Dynamo to visually debug, pretty awesome. I’d like to share what I’ve been up to, get feedback from the Dynamo community, introduce zero touch library importing, and my experience working with it. OR: just get it on the package manager! *If for some reason you just want to use this library, but don’t want to use the package manager, you shouldn’t have to worry about building it, check the Pre-Built folder in the github repository and import DynamoUnfold.dll into Dynamo using the import library menu option.