Wearable Technology Pros and Cons - Humavox. It seems that wearable technology is here to stay. Whether it be because of the buzz behind the Fitbit fitness tracker or the new Apple Watch, wearables are making a splash. So what are wearables? Inside this fairly diverse category named wearables are different innovative (worn) technologies such as smart glasses (VR & AR glasses), activity trackers, smartwatches, Head-Mounted Displays, smart clothing, wireless earbuds, wearable cameras, wearable ECG monitors, hearing aids and more. Essentially wearables include any smart device that you can wear.

This broad category is set on influencing our lives so to properly prepare we lay before you the pros and cons of the current different wearable technologies. Exploring the Benefits of Wearable Technology. What do you reckon will happen to the Internet of Things ten years from now? 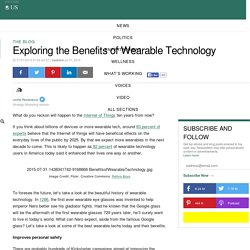 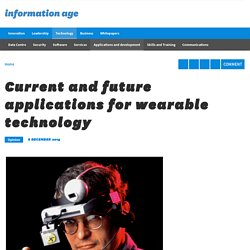 Google Glass is beginning to promised to offer some amazing possibilities, especially in the field of healthcare, which has many examples of wearable technology already in use by many people. Until just recently, smartwatches had not been deployed all that successfully, having limited functionality and aesthetics that have been less than appealing to wear on a wrist. 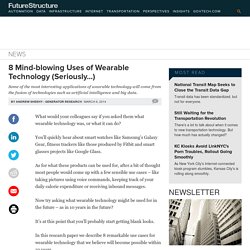 You’ll quickly hear about smart watches like Samsung’s Galaxy Gear, fitness trackers like those produced by Fitbit and smart glasses projects like Google Glass. As for what these products can be used for, after a bit of thought most people would come up with a few sensible use cases – like taking pictures using voice commands, keeping track of your daily calorie expenditure or receiving inbound messages. Now try asking what wearable technology might be used for in the future – as in 10 years in the future? It’s at this point that you’ll probably start getting blank looks. Episode 2: Human Health. Wearable devices: Smartband. Untitled. Here's Why More and More Consumers Are Using Wearable Devices. Study hints that wearable fitness trackers do more harm than good.

If you’ve been wearing a fitness tracker for a while and have been disappointed in the results you’ve received, you’re not alone. 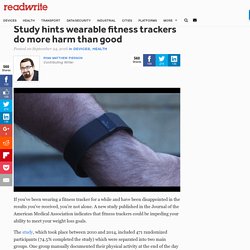 A new study published in the Journal of the American Medical Association indicates that fitness trackers could be impeding your ability to meet your weight loss goals. The study, which took place between 2010 and 2014, included 471 randomized participants (74.5% completed the study) which were separated into two main groups. Wearable Devices in Healthcare, What to Expect in 2016 - Wearable Devices. The changing face of healthcare illustrated one of the most lucrative markets that will be expanding in 2016. 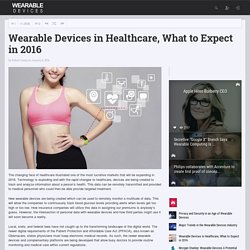 Technology is exploding and with the rapid changes to healthcare, devices are being created to track and analyze information about a person’s health. This data can be remotely transmitted and provided to medical personnel who could then be able provide targeted treatment. New wearable devices are being created which can be used to remotely monitor a multitude of data. Example. Wearable technology. Wearable technology, fashionable technology, wearable devices, tech togs, or fashion electronics are clothing and accessories incorporating computer and advanced electronic technologies. 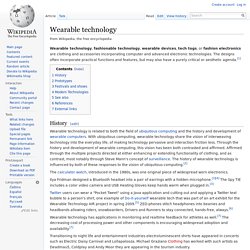