Yves Couder . Explains Wave/Particle Duality via Silicon Droplets [Through the Wormhole] CYMATICS - New Science from Sound Research. Your DNA Song, Unique DNA to Music Production. Cymatics : SolAwakening. Cymatics, Natural Ecosystem of Vibration: Listen to our wonderful Natural Ecosystem around us! What amazing sounds! What is Cymatics? Why is it important? Cymatics (from Greek: κῦμα “wave”) is the study of visible sound and vibration, a subset of modal phenomena. The term Cymatics was coined by Dr. Dr Jenny’s work related to the cyclic nature and interval between wave frequencies. For 14 years, he experimented with sound frequencies, using them to excite various powders, pastes and liquids, which resulted in the generation of flowing geometric patterns.

Then the question and contemplation came wondering if there was a connection between the geometric shapes created by the sound waves and Sacred Geometry. The shapes, figures and patterns of motion (shown above) that appeared proved to be primarily a function of frequency, amplitude, and the inherent characteristics of the various materials. How is this possible? References: www.cymaticsource.com/articles.html. Journal of Cymatics. Sharebar Sound healing is closely tied to cymatics, and in fact I met several M.D. practitioners of sound healing at the Cymatics Conference in Atlanta. 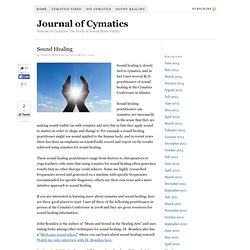 Some use highly researched frequencies stored and generated on a machine with specific frequencies recommended for specific diagnoses; others use their own voice and a more intuitive approach to sound healing. Dr. Cymatics: The healing power of sound. School of Cymatics - The World's First School of Cymatics. Cymatics, Cymascope, John Reid, Dr. Hans Jenny, Music,Research, History, Therapy.. The Universe of Resonance - Cymatics - Harmonics - Sacred Geometry. Cymatic Music. The wave is not the water. 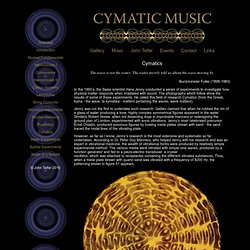 The water merely told us about the wave moving by. Buckminster Fuller (1895-1983) In the 1960’s, the Swiss scientist Hans Jenny conducted a series of experiments to investigate how physical matter responds when irradiated with sound. The photographs which follow show the results of some of these experiments. He called this field of research Cymatics (from the Greek, kyma - the wave, ta kymatika - matters pertaining the waves, wave matters). Jenny was not the first to undertake such research: Galileo claimed that when he rubbed the rim of a glass of water producing a tone, highly complex symmetrical figures appeared in the water. However, as far as I know, Jenny’s research is the most extensive and systematic so far undertaken. Figure 51 When the frequency of the input signal is increased the constituent elements of the harmonic figures become more complex. So far we have only considered the effect of single frequencies upon matter.