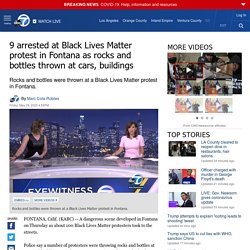 (KABC) -- A dangerous scene developed in Fontana on Thursday as about 100 Black Lives Matter protesters took to the streets. Police say a number of protesters were throwing rocks and bottles at cars and buildings. Windows at Fontana City Hall were also broken. The demonstrators blocked off streets near police headquarters, chanting slogans and then throwing bottles at police who moved in to de-escalate the protest. Police say the protest started out peacefully, but as the crowd grew larger, traffic was blocked on Sierra Avenue, and protesters began to damage property. RELATED: Protests continue in Los Angeles over George Floyd death The gathering was deemed an unlawful assembly at about 9 p.m., and police say some continued to block traffic on Upland and Sierra avenues and throw rocks at officers.

After multiple orders to disperse were given over a loudspeaker, nine people were arrested, police say. Why George Floyd Won't Be the Last American Killed by the Police. This article is part of the Debatable newsletter. 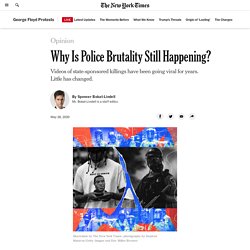 You can sign up here to receive it Tuesdays and Thursdays. Six years ago this August, Michael Brown, a black 18-year-old who had just graduated from high school, was shot and killed by a police officer in Ferguson, Mo. His death, along with those of so many others, set off a national debate about how to reduce police violence. But the deaths of George Floyd in Minneapolis this week and of Breonna Taylor in March are a painful reminder of just how little has changed: Why has there been so little progress, and what needs to happen for these numbers to go down? Many proposed solutions to curb police violence have not proved effective, according to Samuel Sinyangwe, a data scientist and policy analyst at Campaign Zero. The jury on whether implicit bias training works is also still out. Equipping officers to recognize and handle cases involving mental illness is another front for reform.

George Floyd: Black man dies after US police pin him to ground. A Black man who yelled "I cannot breathe" as a white Minneapolis police officer pinned him down with his knee in the US state of Minnesota died late on Monday, police confirmed, drawing outrage from community members and leaders, and leading to the officers' termination. 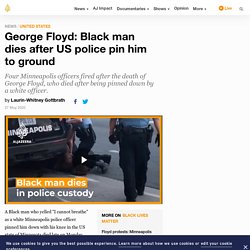 Video of the incident shows the police officer pinning down George Floyd, believed to be in his 40s, to the pavement with his knee on the man's neck for several minutes. Floyd was identified by prominent civil rights lawyer Ben Crump, who said he had been retained by the Floyd family. More: Racism and the black hole of gun control in the USFamilies of African Americans killed by police talk of traumaAhmaud Arbery's family calls for immediate arrests over his death Floyd can be heard saying in the video: "Please, please, I cannot breathe. " The officer tells Floyd to "relax". Floyd responds: "I can't breathe. Justice for George Floyd protest march happening in downtown. HOUSTON, Texas (KTRK) -- A rally and march in protest over police violence is happening now in Discovery Green. 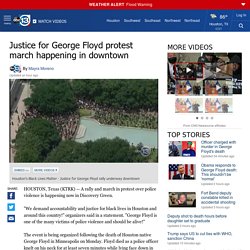 "We demand accountability and justice for black lives in Houston and around this country! " organizers said in a statement. "George Floyd is one of the many victims of police violence and should be alive! " The event is being organized following the death of Houston native George Floyd in Minneapolis on Monday. Floyd died as a police officer knelt on his neck for at least seven minutes while lying face down in handcuffs. Floyd said he couldn't breathe as dozens of bystanders were recording. Four Minneapolis officers involved in the arrest were fired this week. "Whether Mr. Violence erupted around the country following Floyd's death, the worst of which happened in Minneapolis. SEE ALSO: George Floyd's family and teacher react to his death. The Death of George Floyd, in Context. Two incidents separated by twelve hours and twelve hundred miles have taken on the appearance of the control and the variable in a grotesque experiment about race in America. 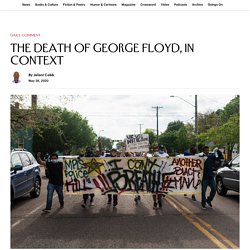 On Monday morning, in New York City’s Central Park, a white woman named Amy Cooper called 911 and told the dispatcher that an African-American man was threatening her. The man she was talking about, Christian Cooper, who is no relation, filmed the call on his phone. They were in the Ramble, a part of the park favored by bird-watchers, including Christian Cooper, and he had simply requested that she leash her dog—something that is required in the area.

In the video, before making the call, Ms. Cooper warns Mr. On Monday evening, in Minneapolis, Minnesota, a forty-six-year-old black man named George Floyd died in a way that highlighted the implications that calls such as the one Amy Cooper placed can have; George Floyd is who Christian Cooper might have been.